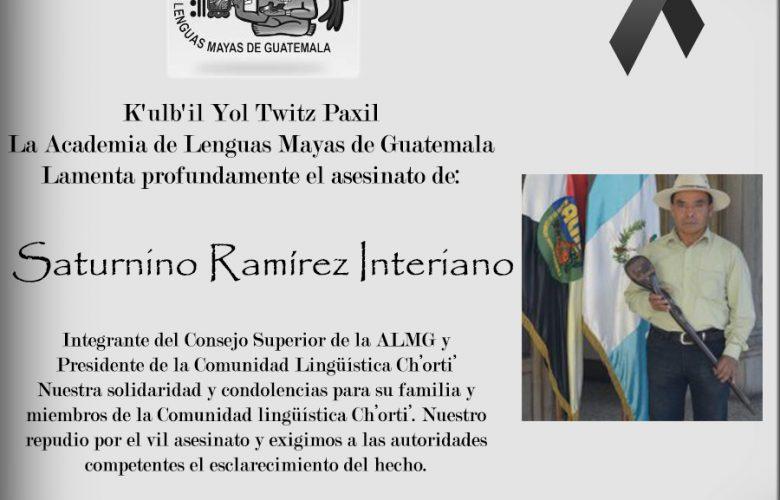 Just two months into the International Year of Indigenous Languages, Maya Ch'orti' linguist Saturnino Ramírez Interiano was assassinated in Chiquimula, Guatemala on February 13, 2019.   He was an linguist, educator, and active proponent of the history and culture of the Indigenous Ch’orti’ Peoples. "He was dedicated to the revitalization of the Ch'orti' language and culture, and always pushed community leaders in the region to maintain this valuable ancestral resource that is part of our identity," shared a colleague.

Saturnino Ramírez Interiano worked for over 10 years as director at the Academy of Mayan Languages of Guatemala in Chiquimula, Guatemala. The Ch’orti’ are an Indigenous Peoples that reside in the Chiquimula and Zacapa departments of Guatemala and in bordering communities in Honduras. They have suffered from a history of colonization, persecution, land loss, and political discrimination. As an Indigenous advocate for Ch’orti’ culture, Saturnino Ramírez Interiano frequently traveled throughout the Ch’orti’ region to teach classes on the Ch’orti’ language and history.

The mission of the Academy of Mayan Languages of Guatemala is to revitalize and promote the use of Mayan Languages throughout the public and private spheres contributing to building a more diverse state. Saturnino Ramírez Interiano was a key actor who was a link between Indigenous communities, the government, and the public. His death showcases the deep racism that plagues Guatemala.

Community groups, advocacy organizations, and UN mechanisms have repeatedly voiced concerns over these killings, which they fear is one component of a mounting human rights crisis across Guatemala.  After a particularly brutal month in May/June of 2018 in which seven human rights defenders were murdered, Victoria Tauli-Corpuz, the United Nations Special Rapporteur on the rights of Indigenous Peoples condemned Guatemalan government in an op-ed in the Washington Post, calling the assassinations and the government’s failure to investigate and bring justice as evidence of institutionalized racism against Guatemala’s Indigenous Peoples. The UN has also called out Guatemala in the past for its criminalization and imprisonment of human rights defenders. Guatemala has received 17 recommendations from UN member states through the Universal Periodic Review system to combat this wave of violence; for example, in 2012, Australia recommended Guatemala to:

“Ensure effective and independent investigations into all reports of extrajudicial executions and ensure that reports of killings, threats, attacks and acts of intimidation against human rights defenders and journalists are thoroughly and promptly investigated and those responsible brought to justice’’

Saturnino Ramírez Interiano is another deplorable casualty in this mounting list.  His compassionate and peaceful efforts to revitalize the Ch’orti’ language and culture were tragically met with violent opposition. The Ch’orti’ and surrounding Mayan communities deeply feel the impact of his death and grieve for the loss of such a dedicated educator.

Cultural Survival stands in solidarity  with the family, friends, and colleagues of Saturnino at the Academy of Mayan Languages of Guatemala, who have called for an investigation of the crime.  May Saturnino Ramírez Interiano’s memory continue to survive and flourish with the prosperity of the Ch’orti’ language and culture.