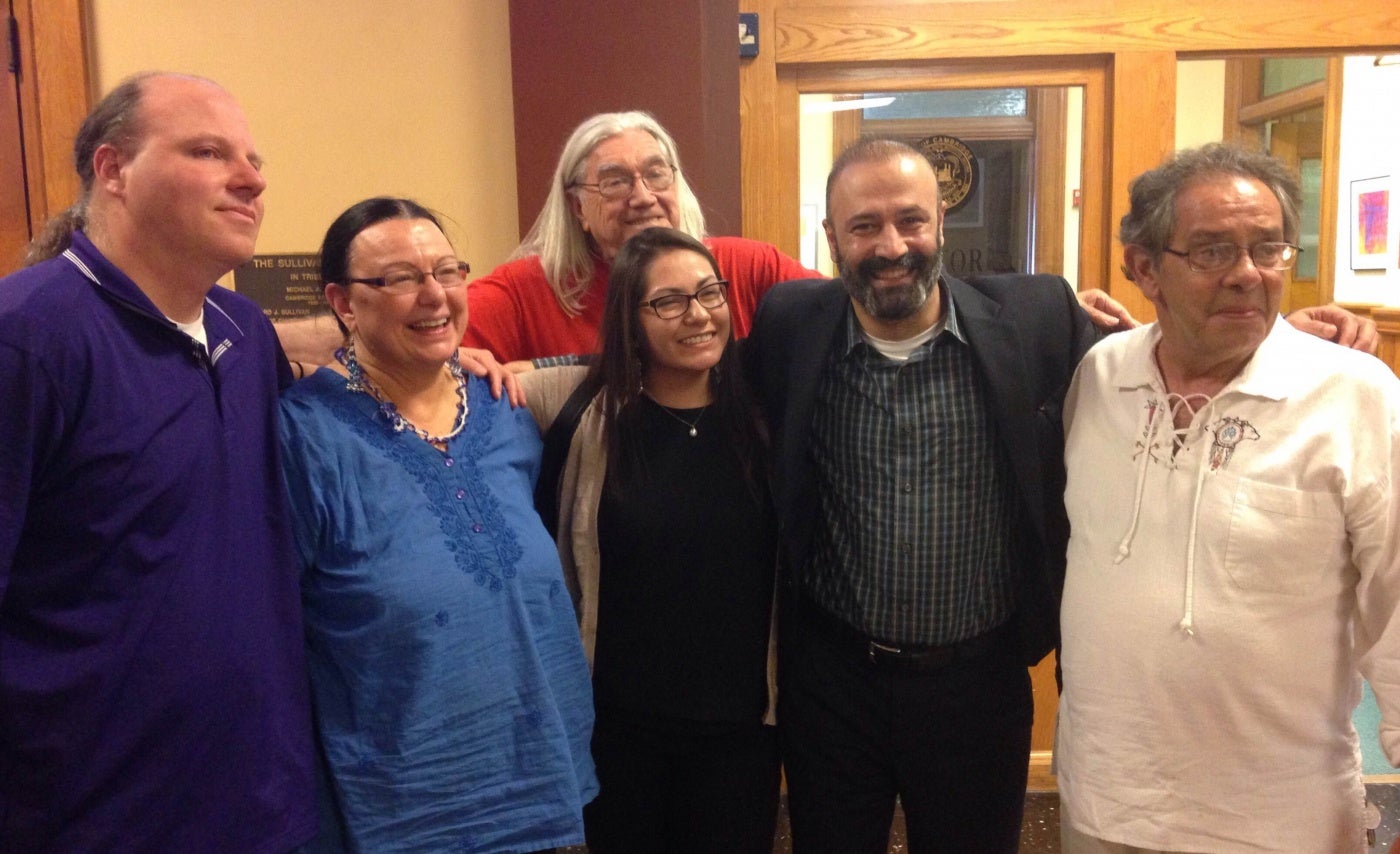 Indigenous community activists celebrate the win outside of Cambridge City Hall, May 2016.

With October just around the corner, we need your help to change Columbus Day to Indigenous Peoples Day in recognition that Indigenous Peoples are still here. Community organizers are coming together to get an Indigenous Peoples Day resolution passed in Boston to recognize the true history of the city and honor the continued resiliency of Indigenous communities in Boston today.  Moonanum James, of the Wampanoag tribe of Aquinnah, explains: "The Massachusett people had villages here. That is where the name of this state comes from. The Massachusett and thousands of others from this region – Nipmuc, Wampanoag, many others – traveled on footpaths here for thousands of years and on the Quinobequin [Quinn-AH-buh-quinn] River, or what the English renamed the Charles River. Our people had names for places, for the rivers, for the coves and villages...We want you to know where you are living, who lives here next to you, about the history of this land where our ancestors are buried and we continue to live. It is long past time to listen to our voices."   Read his full statement, delivered to the City of Cambridge, MA, here.

For decades, many Native people have been calling for an end to the public celebration of Christopher Columbus on the second Monday in October.  They have also asked that Indigenous Peoples Day, a day to honor Indigenous Peoples from throughout the Americas, be declared on that same day because of the date’s significance.  They consider it a first step toward recognizing the genocide of millions of Indigenous people and the theft of their lands that began with the arrival of Columbus.  It is a meaningful symbolic gesture in addressing the pain caused to Native Peoples by the many years of celebrating Columbus as a hero.  Cities including Seattle, Denver, Albuquerque, Portland, Oregon and more have all done this. On June 6 of this year, Cambridge, MA became the first major city in the North East to do so, thanks to the advocacy of many local Indigenous Peoples, organizations, and citizen allies.

Let’s make Boston the next!

Here are 3 actions that the Indigenous organizers have asked supporters to take at this time:

3. Endorse! Help! Sign up! In addition to this, if you or your organization want to endorse this effort, or if you have ideas about how you can be helpful, or if you just want to be on the email list, please let us know on our volunteer/endorsement form.  We want to hear from you!  Thank you!

4. Show up on October 5, 2016 at 4-6pm at Boston City Hall.
Stand up and let everyone at Boston City Hall know that Boston needs to follow the lead of cities around the country and honor Indigenous Peoples Day on the second Monday in October! We will #StandWithStandingRock #NoDAPL too!  Check out the events facebook page here.

Visit http://www.indigenouspeoplesdayma.org/boston/ for more information and to read the draft resolution.