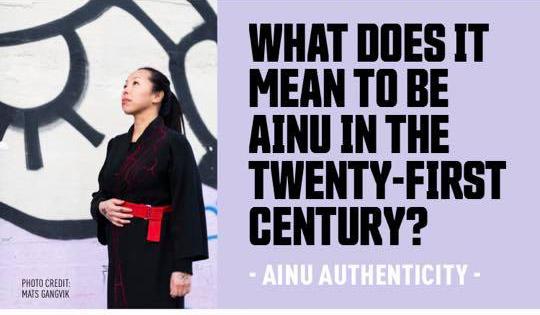 The Ainu Peoples of Japan have faced centuries of discrimination and pressure to assimilate. In 1899, the Japanese parliament enacted the Hokkaido Former Aborigines Protection Act in an attempt to force the Ainu to assimilate into the majority population and suppress their Ainu identities. In 1997, the Hokkaido Former Aborigines Protection Act was replaced by the Ainu Cultural Promotion Law. This law, however, focused only on the Ainu culture and made no attempt to address Indigenous rights or the social and economic struggles of Indigenous communities in Japan. It was not until April of 2019 that the Ainu people were finally officially recognized in legislation as Indigenous Peoples in Japan for the first time.

While this official recognition still does not address the rights violations Ainu Peoples face as the Japanese government does not want to recognize the rights to self-determination and collective rights, following international law standards, it has created some space for the Ainu to feel a renewed sense of pride in their culture and to reclaim their culture and identity. A national Ainu Museum, called Upopoy, for example, was created. Dr. Kanako Uzawa (Ainu), a scholar, advocate, artist, and former Cultural Survival intern, gave a virtual lecture on June 21, 2021, at Simon Fraser University to answer a very important question for the Ainu community in the wake of this legislation: What Does it Mean to be Ainu in the 21st Century?

“Many images one can see in Ainu literature [and] museums may give the impression that Ainu people and culture do not exist anymore and that Ainu culture belongs to ancient history,” said Dr. Uzawa. “This is not true. I am an example of that.”

Dr. Uzawa shared stories of Ainu dances and songs that she learned from Elders at Rera Cise (meaning house of wind), the Ainu restaurant where she worked as a university student in Tokyo. She cherishes these teachings, and now performs Ainu chants and dances that she has interpreted in her own way, giving them a modern twist. Some of these dances, along with art and music by other Ainu artists, are featured on her new website, AinuToday.

Dr. Uzawa created AinuToday in order to make modern Ainu issues and art accessible and provide a space for contemporary Ainu expression. AinuToday provides resources for Indigenous rights, Ainu language learning, and traditional craft-making, as well as a collection of literature and information about the Ainu people’s everyday lives written by Ainu people themselves. A lack of information and knowledge about Ainu culture and people can sometimes lead to disrespectful engagement with the culture, and AinuToday is a long-awaited and much-needed platform that encourages an international dialogue about what it means to be contemporary Ainu.

Another feature of Dr. Uzawa’s lecture was a case study she conducted for her PhD dissertation on Urban Diasporic Indigeneity from an Ainu Perspective in Japan. She wanted to know how urban spaces provide challenges and opportunities to the expression of Ainu Indigeneity in contemporary Japanese society, and she turned to the Urespa Club—a program at Sapporo University that trains Ainu and Wajin (ethnic Japanese) youth in Ainu language and culture—for answers. During her fieldwork, there were 20 Urespa students, half of whom identified as Ainu and the other half of whom identified as Wajin, the dominant people of Japan. She discovered that Ainu cultural revitalization goes beyond the boundary between Ainu and Wajin relations. Because these students were treated equally and had to work together in group activities, they were able to bridge the cultural and social gap between them and engage with each other with mutual respect. This particular learning environment formed a more inclusive social model and gave students the space to learn about their culture and how to express themselves in contemporary society, all while contributing to the decolonization process.

Cheyanne Connell (Dunne-Za and Cree), a master’s student in Cultural Anthropology at Simon Fraser University, spoke about what Dr. Uzawa’s presentation meant to her as an Indigenous person and researcher. “A lot of scholarship and media keep reproducing this image of the Indigenous person as very traditional, mirroring quite historical depictions of what being Indigenous looks and feels like,” she said. “What is really great to see in [Dr. Uzawa’s] presentation, again, is that being Indigenous is clearly much more multifaceted than this one, in a way, fossilized depiction. We don’t just cease to be Indigenous when we partake in things outside of our ancestral traditions. So long as we honor, respect, and embody the teachings
of our Elders and our ancestors, there are arguably a lot more ways we can express ourselves.”

When asked what traditional teachings or advice she would give to younger generations of Ainu who are still learning about themselves and their culture, Dr. Uzawa stated, “Be curious, and follow your heart… believe in yourself and explore the new possibilities.”