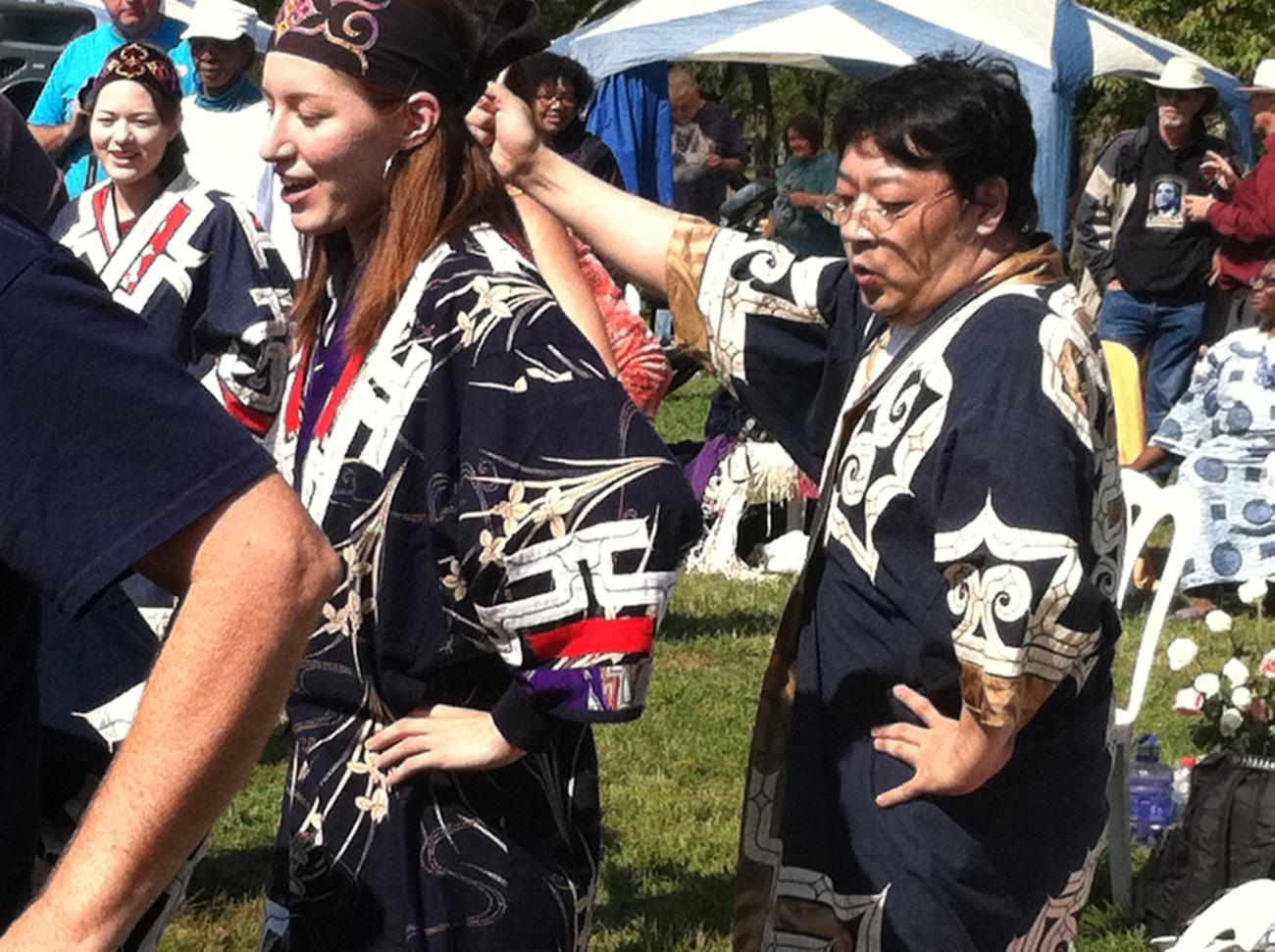 Raising their sake bowls to the sky, two Ainu leaders dressed in elaborately embroidered coats began their ritual offerings to the gods. On September 29-30, 2012 representatives of two Indigenous Ainu families from Japan participated in the annual “Prayer Vigil for the Earth” at the Washington Monument in Washington, DC. The gathering featured music, dance, and prayer from diverse cultures such as Tibetan, Lakota and Ojibwe Native American, West African Ashanti, Celtic, and Muslim Sufi Zikr, and included a circle of tipis, a Tibetan stupa, Jewish sukkah, among other structures. The prayer vigil provides a space for people from different generations and cultures with diverse religious backgrounds to congregate and practice peace with oneself, others, and the Earth. This photo essay focuses on the Indigenous Ainu of Japan, whose distinct presence stood out among the cornucopia of diverse cultures.

Tsugio Kuzuno, an instructor at the Shizunai Ainu language school, led the Ainu ancestor ceremony. As herbs smoldered over a low fire filling the air, Kuzuno, his students, and translators sat on nikapunpe (fiber mats) arranged in a semicircle with an opening for the Japanese deities. The Ainu believe that wishes to the gods are conveyed by smoke to heaven. A photo of Kuzuno’s deceased father and spiritual elder, Kuzuno Ekashi, along with fruit and pastry offerings and ikupasuy (carved ceremonial utensils used to offer sake to the gods) were prominently displayed. After raising the bowls full of sake toward heaven, then pointing them towards the opening in the circle, Kuzuno and his students dipped the ikupasuy in the sake, tapped each shoulder, and drank a small portion. Later, the Ainu representatives inserted inaw (wooden stakes) with bushy fibrous tops into the ground, sprinkled sake on them using the carved ikupasuy, and once again sipped the sake. Inaws, made from willow and dogwood trees, are sacred symbols used for worship and erected for specific gods. The ceremony was a quiet, solemn affair interspersed with chanting and prayer.

After the ancestor ceremony, the Ainu shared their traditional dances. Women dancers made graceful movements that involved sitting and standing, while the men’s dance involved a bow and arrow and enacted a theme of a hunter wanting to live in harmony with the animals. Both men and women wore long dark blue robes with bold geometric designs in red, white, and beige. While the suggestion that Native Americans and Asians share a common link via the Bering Strait is a contentious one, there were striking similarities in the shapes, designs, and color of the ceremonial robes of the Ainu and those of west coast Native American nations.

The Ainu culture located around the Shizunai area was the focus of the two visiting families. According to literature distributed at the prayer vigil, the Ainu lived in Sakhalin, the Kurile Islands, Hokkaido, and north Tohuku (northeast Japan). Many Ainu families now reside in the Shizunai area where they used to live a subsistence lifestyle based on fishing, gathering, and hunting. Hokkaido had human settlements 30,000 years ago and human remains have been found in Shizunai dating back 9,000 years.

Approximately 600-700 years ago, Ainu culture was established in Hokkaido. At that time, Japanese warriors immigrated to Hokkaido from northeast Japan and built forts that caused friction, eventually leading to a battle in 1456. Japanese also explored the Shizunai river area, establishing trade between the Ainu and the Japanese Matsumae feudal government. Unfair trade practices resulted in uprisings led by Shakusha-in, an Ainu warrior. But the Ainu were ultimately defeated and the Japanese government exerted more control over the different Ainu groups.

As late as the early 19th century there was still evidence of Ainu cultural preservation in agricultural and spiritual practices. Suteno Orita (1899-1982) was an Ainu storyteller who compiled the Ainu oral literature, which consisted of mythology, folk tales, heroic figures, and fables that take three days and nights to complete.

The Ainu religion can be described as animist due to their worship of the natural world where spiritual forces are acknowledged in all sentient beings and in all phenomena. Ainu cosmology has three domains. The highest domain is governed by the sun and moon gods; the next domain has gods that are located in heaven with stars and clouds; and below that is the human domain. After death, the Ainu bury their loved ones’ bodies so that they can return to the Holy Land, or lower land, and their spirits can rise to heaven. Some of the more exceptional Ainu are believed to experience reincarnation.

— Phoebe Farris, Ph.D. (Powhatan-Renape) is contributing arts editor for the CSQ. She is a professor emerita of Purdue University and the vice president for membership of the Washington D.C. branch of American Association of University Women.