How the History of Linguicide Threatens Indigenous Peoples in Asia Today 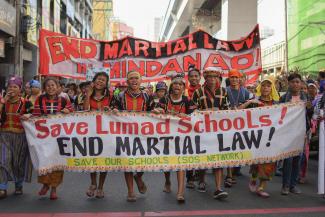 The case of the Ainu in Japan is a clear example of linguicide. Struggles of the Ainu to bequeath their language started during the Meiji Era, specifically in 1899, when the government introduced the assimilation policy and subsequently banned the use of Ainu language along with traditional hunting and gathering practices. Ainu children were restricted from using Ainu names and forced to adjust to the Japanese school system. It took more than 100 years for the Japanese government to legally recognize the Ainu as Indigenous Peoples with a distinct culture and language and outlaw any form of discrimination against them. With less than 15 Ainu speakers left, questions remain over how to reverse the decline of the Ainu language over the last century.

In the Philippines, Lumad leaders have taken the initiative to prevent irreversible language loss since the Philippine government fails to provide a culturally appropriate education for their younger generation. For decades, they have displayed perseverance by providing education for their children as a way to maintain their cultures and languages and defend their ancestral territory. However, in 2017, President Rodrigo Duterte publicly threatened to bomb Lumad schools, labelling them as insurgents and supporters of the anti-government guerilla force, the New People’s Army (NPA). Surrounded by heavy military presence, there have been 284 attacks on Lumad schools. To date, 26 schools have been commandeered for use as military camps, and an additional 72 schools have ceased operations, affecting more than 2,000 Lumad students. The number may increase due to the recent extension of Martial Law in the Mindanao region. At the moment, even the running of daily operations, such as holding classes, is extremely challenging.

The cases in both Japan and the Philippines illustrate how the push for capital growth destroys Indigenous communities. Militarization in Mindanao chiefly ensures that the interests of predominantly foreign-owned mining and logging corporations are met with no resistance, and put a premium on profit-driven interests of multinationals at the expense of Indigenous communities. Japan’s Meiji restoration was also a prelude to the militarism that Japanese society embraced during earlier half of the last century. Schools at this time aggressively shaped the identity of young generations, including Indigenous youth and children, towards a homogenous society with absolute loyalty to the emperor.

Halting the Decline
According to Aliansi Masyarakat Adat Nusantara (AMAN), the largest Indigenous Peoples’ alliance in Indonesia, more than 800 Indigenous languages are spoken in the country. To safeguard these languages, AMAN is boosting efforts to promote youth-led Indigenous education systems across the country. Leadership of Indigenous youth is critical. One such place taking the initiative to revitalize Indigenous language is Haruku Island, on the Maluku archipelago in the eastern part of Indonesia. Local leaders have urged the Moluccan government to include Haruku language in the formal education curriculum.

Revitalization has been a response to the language’s erosion, which began as early as 1546. Accused of paganism by their colonizers, Haruku people were forced to stop traditional ceremonies and use of their Indigenous language, making their language endangered today.

One elementary school in Haruku is working to reverse the tide by allocating time for Haruku language classes. In addition to the community-driven plan to create a Haruku language dictionary, the first annual storytelling competition was launched last year. Community-led revitalization initiatives as taken by Haruku people are a reflection of their resilience and need vital support from the government.

— Patricia Miranda Wattimena (Haruku from Indonesia) is programme associate of Breaking Out of Marginalization (BOOM) at Asia Pacific Forum on Women, Law and Development, and the former advocacy coordinator at Asia Indigenous Peoples Pact in Thailand.