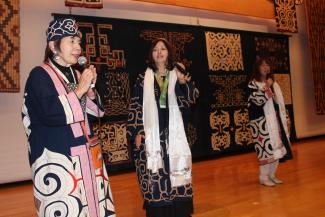 After long battles by Ainu nationally and internationally against 100 years of forced assimilation, oppression, and discrimination, the Japanese government passed a bill last April recognizing the Ainu as an Indigenous Peoples of Japan for the first time—a move welcomed by activists as a first step towards achieving equality. Ensuing efforts to revive the Ainu language, dances, and music has contributed to a positive appreciation of Ainu culture. “I feel so proud of being Ainu today, as I had never felt previously. We are trying to regain the lost language, our distinct culture, and identity,” said Tsugumi Matsudaira, a young Ainu singer and performer.

When their island was annexed by Japan’s Meiji government in 1868, the Ainu language was banned and the children were put in Japanese schools. Ainu were forced to use the dominant languages and customs of the Wajin, the dominant people of Japan. Since Japanese was taught at school, there were few opportunities for them to speak Ainu; as a result, only a few people can speak Ainu today and many Ainu traditions have been lost. This forced assimilation policy resulted in significant education and income gaps and left the Ainu language deemed critically endangered by UNESCO, with the only surviving dialect among the Ainu living in Hokkaido. Typical dialects of Ainu are spoken in the southern part of Sakhalin Island (the north belonging to Russia) and also Kuril Island.

According to Matsudaira, Ainu face systematic discrimination by Wajin. Many still conceal their identity on surveys when seeking jobs or marriage because they are afraid of being discriminated against. “If we disclose ourselves as Ainu when we seek a job, we are refused. If we want to get married, the family doesn’t want us in their homes,” she said. “My grandfather, grandmother, and mother were Ainu, but they didn’t want others to know that they were Ainu.” Ainu people look distinct from mainstream Japanese with differently shaped eyes and noses. Historically they have been regarded as “dirty,” “backward,” or “primitive” people and were forced to do petty labor.

Ainu people are traditionally deer hunters and salmon fishermen; their lifeways are deeply rooted in nature. Their animist belief system revered all things—animals, trees, lakes, mountains—believing them to be inhabited by spirits. After the Meiji government came to power, Ainu people were forbidden to practice their customs and life ways. Even today, they need explicit permission from authorities to fish. A group of Ainu are in the process of filing a lawsuit against the State to acquire rights to salmon fishing in rivers close to their residences.

Ainu women face more challenges than Ainu men. Kaori Tahara, an Ainu rights activist who teaches Ainu history at Tokyo University, explained, “Ainu women face double discrimination, not only by the dominant Japanese, but also by Ainu men. The Japanese government recognized us for the first time as Indigenous Peoples. It is a real victory for the Ainu community, but our struggles are not over yet. We continue to face discrimination and we are not yet free to celebrate our culture, speak the Ainu language, or reveal our distinct identity.” According to Tahara, Ainu people were officially forbidden to speak their language and were forced to take Japanese names.

Ainu language, culture, and lifeways thrived in Ezo or Ezochi (the land of the Ainu) in the northern part of the Japanese Archipelago, the southern part of Sakhalin Island, and in Kuril Island prior to 1869. At that point, the Meiji government (which ruled Japan from 1868 to 1912) annexed Ezo and renamed it Hokkaido. From that year on, Wajin started immigrating to Hokkaido. The Meiji government outlawed the Ainu language, putting restrictions on the Ainu Peoples’ traditional livelihood, dispossessing them of their land, and imposing a new way of life. Salmon fishing and deer hunting were banned, which worsened the situation of Ainu people. 
In 1875, Russia and Japan signed an agreement for the exchange of Sakhalin for Kuril Island, and Ainu people who lived in southern Sakhalin and Kuril were displaced to Hokkaido. In 1906, after the war ended between Russia and Japan, large numbers of Ainu from Hokkaido returned to south Sakhalin, but in the 1940s, many Ainu who had returned to Sakhalin were expelled back to Japan. In 1899, the Japanese government introduced the policy of assimilation of Ainu, known as the Hokkaido Former Aborigines Protection Act. The law strictly limited Ainu culture, assimilating the Ainu to Wajin culture by educating them in the Japanese language and Wajin customs.

In September 2007, when the United Nations General Assembly adopted the Declaration on the Rights of the Indigenous Peoples, the government of Japan voted in favor of it. In June 2008, just prior to the G8 summit scheduled in Hokkaido, Japan unanimously adopted the nonbinding Resolution to Recognize the Ainu as an Indigenous People. In July of the same year, the government formed the Advisory Council for future Ainu Policy. The panel recommended the government form a comprehensive Ainu policy department in the cabinet secretariat, based on which the Council for Ainu Policy Promotion was established. In 2014, the cabinet approved the basic policy for the development and management of spaces to promote the revitalization of Ainu culture.

In response to the Ainu Peoples’ movement, after almost a century of Wajin rule, the government of Japan enacted the Ainu Culture Promotion Act and repealed the Hokkaido Former Aborigines Protection Act. The new act officially acknowledged the existence of the Ainu ethnic groups in Japan, but stopped short of recognizing Ainu as Indigenous Peoples. However, it signaled the start of a shift toward the acknowledgement of Ainu ethnic groups in Japan, who are estimated to number between 13,000–20,000. According to Tahara, Ainu Peoples have historically suffered from economic and social discrimination, which continues to this day. Although the Japanese government has recognized Ainu as the only Indigenous Peoples of Japan, besides Ainu, there are also Ryukyu Indigenous Peoples in Japan. Said Tahara: “The Japanese government and Japanese people still are with a mind of one nation, one people, and one language. In fact, Japan is a multicultural, multilingual, and multiethnic country. We want all Japanese and the Japanese government to accept this fact.”

All photos by Dev Kumar Sunuwar.