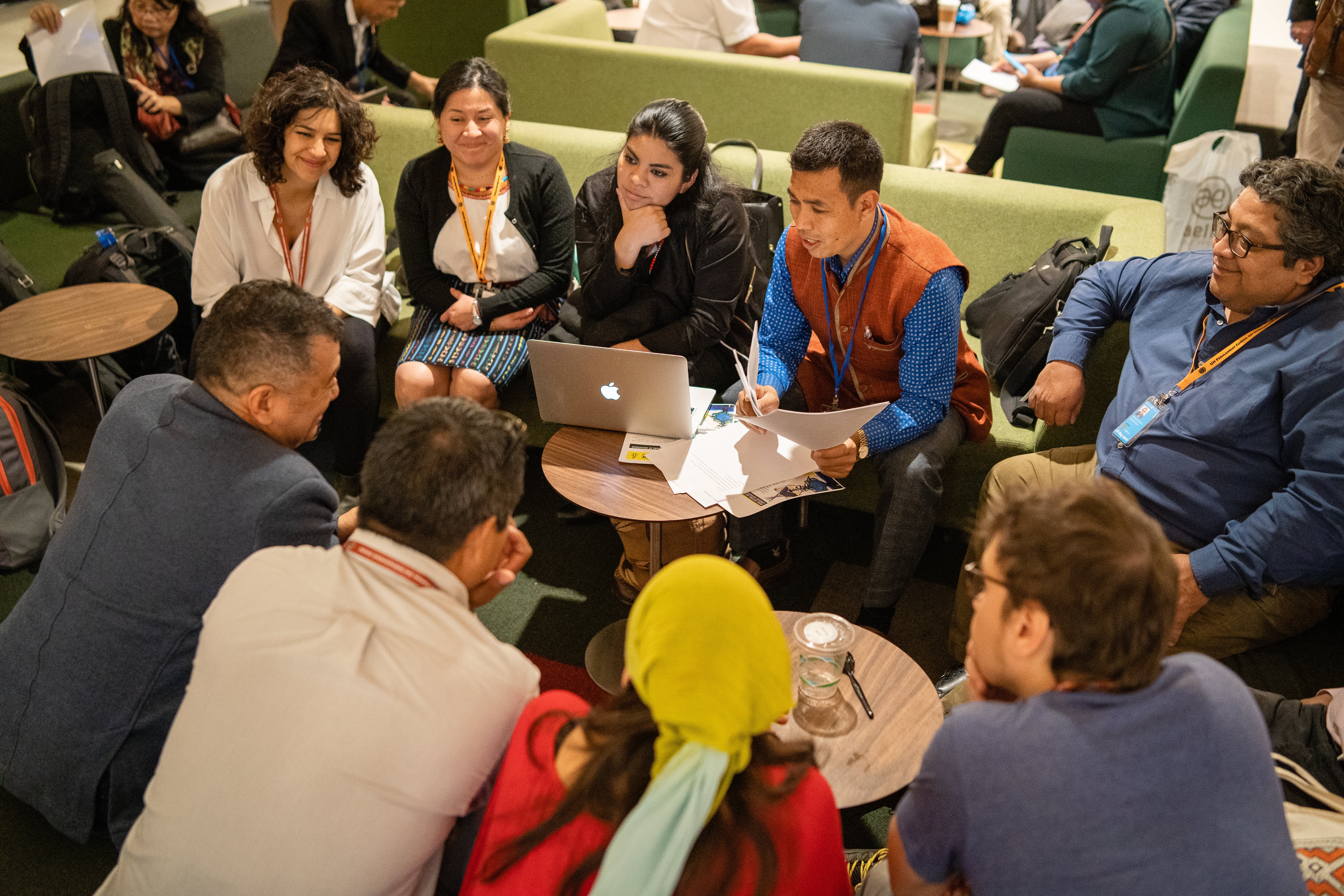 Indigenous media is technology used for the exchange of information among people, communication that may take place within family members, communities, and in the marketplace. In this article, Indigenous media does not refer to Indigenous oral or folk media, but encompasses those media or forms of media where expression is created, owned, controlled, and managed by Indigenous Peoples to produce and exchange culturally appropriate information in the languages that they speak and understand.

Indigenous Peoples have long had a hesitant relationship with the mass or mainstream media, which mostly represent dominant groups and are often used as weapons for destruction of Indigenous values, belief systems, and their identities. Having no access, participation and access to those mass media, Indigenous Peoples are too often not properly portrayed and represented. However, in the past few decades, Indigenous Peoples have adapted media  technologies to use them to meet their own political and cultural needs.

Though Indigenous Peoples have produced their own forms of media for expression for generations, their recent shift to use of modern technology, has amplified expression, but also brought land and forest claims, including the histories of struggles for survival to the attention of international audiences. As a result, Indigenous media has increasingly become a target of authorities who want to suppress the broadcasting of information on violations.

The power of media in raising awareness, sharing knowledge, strengthening, and maintaining Indigenous languages, and also shaping people’s lives is widely acknowledged. The flow of information among and between Indigenous Peoples is significant not only for realizing their rights but equally for their right to life with dignity. Especially when the means for generating such information is under the ownership and control of Indigenous Peoples themselves, it helps with empowerment and achieving rights, because, the so called mass media do not serve Indigenous communities in communicating their concerns. International laws such as UN Declaration on the Rights of Indigenous Peoples (UNDRIP), a landmark declaration adopted on 13 September, 2007, by the General Assembly, in its Article 16 (1) affirms Indigenous Peoples have the “right to establish their own media in their own languages and to have access to all forms of non-Indigenous media without discrimination.”

Globally, Indigenous communities are making incredible efforts to establish media in their own languages, in their communities, by and for their people. The increased global media movement has helped not only to increase Indigenous voices, participation and access to media, but also have strengthened the use of Indigenous languages in the media.  Indigenous media are weakened and threatened by antagonistic attitudes both by government agents as well as by commercial media. In many countries, mainstream media is only available in dominant languages, making it inaccessible to many Indigenous Peoples and hampering Indigenous Peoples’ right to access information in their languages, contributing to the marginalization and loss of Indigenous languages. However, UNDRIP Article 16 (2) further puts obligations on State governments to “take necessary and effective measures to ensure that State-owned media duly reflect Indigenous cultural diversity. States, without prejudice to ensuring full freedom of expression, should encourage privately owned media to adequately reflect Indigenous cultural diversity.”

Though Indigenous Peoples are using media to voice their concerns, in many cases, Indigenous media practitioners and communicators have had to work under threats and intimidation and regularly experience violence perpetrated by government agents. Many Indigenous journalists live in fear of violence and criminalization simply for exercising their right to freedom of expression while reporting on divisive issues relating to environmental protection, land rights, social movements, human rights, and local politics.

International human rights law guarantees protections on freedom of expression, UNDRIP guarantees the right of Indigenous Peoples to have access to their own media, however, Indigenous Peoples have been excluded from accessing media for many reasons such as  geographic location and language and legal barriers. Indigenous Peoples living in isolated places, far away from cities have no physical access to urban-based centered media. Similarly, lack of awareness about human rights, freedoms, and claiming the right to access  information about state and municipal services further poses challenges.

Working in difficult conditions in remote areas, Indigenous journalists are often the only channels of informing their communities about the violations of their rights or bringing information to their communities about cultural and social issues, which would otherwise not be covered by other media. Although all journalists face similar threats, it is often Indigenous journalists and communicators who are most impacted, as they are often working in informal settings, in rural areas inaccessible by the mainstream media and even government officials.  They often lack access to mechanisms of protection and justice. Indigenous journalists are frequently not formally recognized as journalists due to not having formal university training or because they are not affiliated with a major press or news agency. This added risk of safety often goes unreported and is overlooked by both government and international mechanisms.

In order to coordinate advocacy efforts and to bring problems faced by Indigenous community media and media practitioners to the international level, a group of Indigenous journalists and media practitioners from four different countries (Bolivia, Guatemala, Nepal, and Venezuela), gathered during the 15th session of the UN Permanent Forum on Indigenous Issues (UNPFII) in 2016 to launch the Indigenous Media and Communication Caucus. The Caucus today has been a collective space for Indigenous journalists globally including communities to unite voices, thoughts, ideas and actions, as well as to make joint efforts to address pressing issues and exchange best practices, to coordinate advocacy among Indigenous media and communication practitioners. The Caucus aims to stress the importance of democratizing community media and demands safety for Indigenous community and community journalists at the UN Permanent Forum on Indigenous Issues (UNPFII), Expert Mechanism on the Rights of Indigenous Peoples (EMRIP) and other relevant forums at UN and international fora.

Since its inception, the Caucus has been making collective deliberations, has submitted a number of recommendations to UN bodies, and has engaged in lobby and advocacy actions by bringing the increased risks and challenges faced by Indigenous journalists and communicators to the attention of international audiences and assisting Indigenous communities in their efforts to establish media in their own languages by and for their communities.

To fully understand the status of Indigenous media globally, in 2019, the Caucus is currently conducting a global study, which will be helpful for advocating for the fulfillment of the right to freedom of expression within state legal frameworks, as well as for advocating for better laws to access media frequencies.