Hear Our Voices: Launching a Communications Caucus at the UN 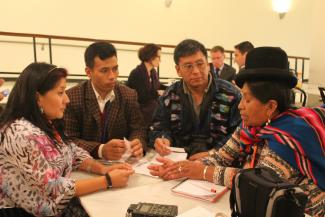 Oral tradition for Indigenous Peoples has long been a mechanism to share ancestral knowledge. Mother tongues have kept ancient wisdom alive and have contributed to the global transmission of collective community knowledge. Communication from generation to generation, from the guardians of our planet, our grandmothers and grandfathers, to grandchildren, has permitted continued care for the earth.

Technological advances have connected the world, converting us into a small global village. However, Indigenous Peoples have been excluded from accessing mass media due to the privatization of radio frequencies by governments and corporate powers. The International Union of Telecommunications has affirmed that the radio spectrum belongs to humanity and that States should administer the frequencies, but at no time should they privatize them or permit them only to benefit a small group of business owners, as is the case in many countries.

In Guatemala, the majority of the population is Indigenous, but legislation does not recognize community use of radio frequencies. Economic discrimination limits access to these frequencies and the State has failed to democratize the radio spectrum. In other countries where the same situation exists, adversity has motivated Indigenous Peoples to launch their own alternative media to serve their communities, promoting their Native languages and cosmovision (worldview) through the radio.

International agreements and human rights treaties on freedom of expression, as well as the UN Declaration on the Rights of Indigenous Peoples, guarantee the right of Indigenous Peoples to have access to their own media and support the creation of local reports, written press, television, blogs and websites, and community radio. However, coverage is limited; internet access is difficult in places where signals are weak or where the internet does not reach, and in places where there are high levels of illiteracy.

Indigenous Communications Caucus
To address some of these issues, the Community Radio Movement of Guatemala and Asociación Sobrevivencia Cultural initiated a proposal to unite our voices globally through the creation of an Indigenous Communications Caucus. The objective is to form an Indigenous community media platform at the global level to stress the importance of democratizing community media. It was with this in mind that we began to lobby for a space at the 15th session of the UN Permanent Forum on Indigenous Issues, which took place in May 2016.

The caucus is a space in which Indigenous Peoples can connect our efforts in order to promote ancestral values and knowledge. To do this, it is necessary to create and strengthen a network that allows a variety of actions and efforts to come together, pushing for the recognition of the right to freedom of expression within State legal frameworks. This can be through advocating for better laws regarding access to radio frequencies and new technologies, among other media.

During the Permanent Forum, Indigneous representatives of four countries, Venezuela, Bolivia, Nepal, and Guatemala joined together to establish and launch the caucus. Each country representative has taken on follow-up tasks in order to clearly define the objectives, values, and principles of the caucus and to begin to advocate for the rights of Indigenous Peoples and Indigenous communication around the world.

The development of societies cannot occur without media. Media in the hands of Indigenous communities can promote their own development, as well as strengthen the use of Indigenous languages, music, ancestral knowledge, and local forms of organization that are in danger of disappearing due to globalization and a worldview imposed by the international media corporations.

Values and Principles of the Caucus
Our values and cosmovisions must be the central theme of the Indigenous Communications Caucus. Among those values and principles is the importance of unity, the fundamental need to unite our voices, our thoughts, our ideas, and our actions, in order to be able to stand up together, without any group being left out, as is highlighted in the sacred book of the Maya, Popol Vuh. Another value is that of giving one’s word as a verbal commitment, which should be held above any other obligation. The social, political, and economic life of Indigenous Peoples have funcioned within this dynamic, in which agreements and consensus do not need to be validated in writing or by bureaucratic protocol.

The leadership of the caucus and the media must revitalize the power of giving one’s word as a valid and valued form of commitment in their work and media content. In order to unify, respect is imperative. We must learn from the diversity of knowledge, ideas, and opinions of our children, youth, women, men, grandparents, ancestral authorities, and spiritual guides. We all have something to contribute in the development of communication.

In the same vein, we need solidarity in our fight for alternative media, to give voice to the demands of Indigenous Peoples in the face of violations of our rights, and more specifically, to objectively relay information. And we need to listen to all voices and opinions in a community.

The media must generate programs with content based on Indigenous cosmovision, the principles of balance between mother earth and human life. It must promote ancestral knowledge with great respect. Information and communication must come from the four cardinal points of the world. It is a challenge that the caucus must assume in order to connect all Indigenous Peoples.

Learning from one another through exchanges of experience will allow diverse Indigenous communities to increase their knowledge and ways of communicating. Participation of men and women in decision-making roles will increase equality. Men and women have the same capacity to assume responsibilities and to be protagonists in the world of alternative communication. The Indigenous Communications Caucus is a window that has been opened for the Indigenous Peoples of the world to create a network that allows us to join the global media scene in a way that’s true to our identities, and to demand our rights before State governments.

To learn more about the Caucus or to get involved, contact: axunic@cs.org.