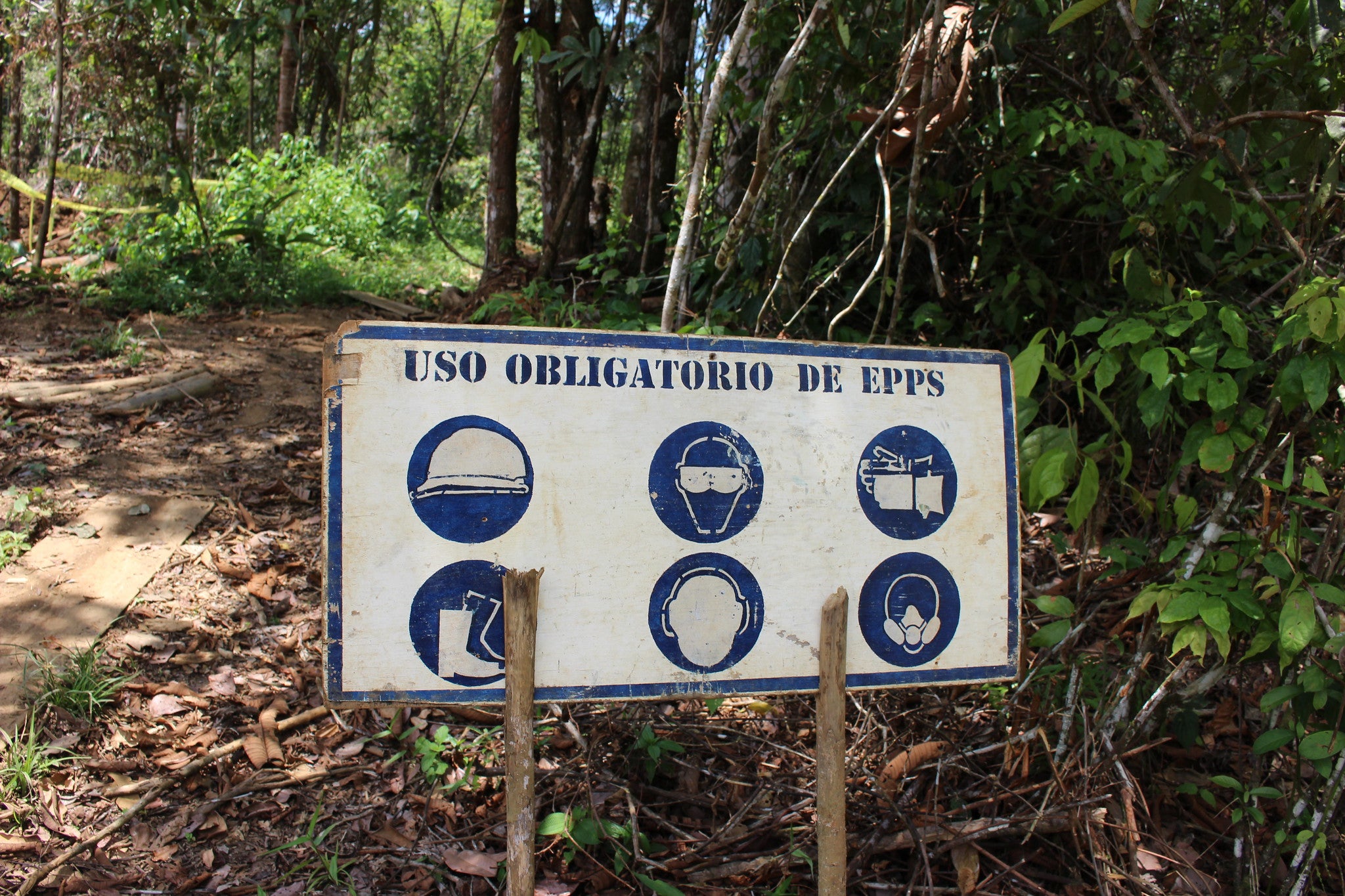 Photo: Sign warning "Use of PPE is obligatory" by oil well sites in Nuevo Andoas, Peru. Photo by Danielle DeLuca

Quechua, Achuar, Kukuma, and Kichwa communities of Peru’s Loreto region in the Amazon rainforest have been fighting against oil contamination in their territories for nearly 50 years. Argentine oil company Pluspetrol began extracting oil in 2000, and although it committed to cleaning up the oil spills caused by the companies that preceded it, it both ignored that promise and proceeded to further devastate the land, plants, waters, animals, and human communities of the region.

Now, the communities are filing a complaint with the Organisation for Economic Cooperation and Development (OECD). Apu Aurelio Chino, traditionally elected leader of tens of thousands in the Peruvian Amazon, and president of the Indigenous federation FEDIQUEP, traveled to the Netherlands in March 2020 to “[accuse] Pluspetrol of contravening OECD guidelines by using ‘artificial tax avoidance structures and strategies’, impacting the “human rights of the local Indigenous population[.]’” The OECD has clear guidelines for corporations, and the complaint serves as a request for the entity to “examine Pluspetrol’s social policy and to mediate between the communities and the company so that the company takes its responsibility and cleans up the pollution in the rainforest.”

As Apu Aurelio returned home to Peru, the extent of the international spread of Coronavirus was just making itself clear. Upon arrival to Peru, the he was tested by the Ministry of Health for COVID-19 and tested positive, despite displaying no symptoms.  "On my return from Holland, they gave me a test in Lima. I went on to Tarapoto, and two days later they communicated that I had covid-19 but was asymptomatic. Following the recommendations from the health officials, I passed through a period of quarantine with no issues, following which the result was negative," shared Apu Aurelio Chino in an email to Cultural Survival.  He has since been waiting in Tarapoto for the green light to return home to his community in the Peruvian Amazon. Still, the leader has been met with racist remarks across social media.

Indigenous communities across the world are facing unique challenges to COVID prevention, as many struggle with under-resourced community health clinics, high levels of pre-existing conditions, poverty and malnutrition, and difficult access to urgent care. Despite closures and calls for isolation, many communities are still forced to deal with ongoing extractive industry on their lands. Deemed “essential business” this has included ongoing construction of the KXL pipeline in the United States, highway expansion in the Brazilian Amazon, and ongoing oil extraction and contamination in Apu Aurelio’s home communities.

The effort by Indigenous federations in Peru to involve the Organisation for Economic Cooperation and Development follows decades of political, social, legal, and environmental actions to invoke their right to Free, Prior and Informed Consent related to extractive projects and demands that oil companies be held accountable for the contamination they have wrought. These actions include advocating at the United Nations, peaceful protest on site at the oil wells, and many domestic legal battles.

Since 2005, Pluspetrol contaminated close to 2000 sites with both oil spills and intentional disposal of “production waters” contaminated with toxins. The production waters are estimated to amount to three billion barrels. Pluspetrol, whose concession to extract oil in these sites ended in 2015, was only one of many companies who have contributed to the environmental and cultural destruction since 1971, when oil extraction began. A 2018 study found that out of 1,138 community members tested, 57% had blood lead levels that surpassed the international standard, while nearly a third had excessive arsenic and lead levels.

In 2014, Cultural Survival visited Nuevo Andoas, a community on the Pastaza River in the Peruvian Amazon, as part of a cultural exchange between the Quechua communities there and Maya Q’eqchi communities in Guatemala. Our full-length radio documentary in Spanish includes interviews with Indigenous environmental monitors, an environmental engineer, and oil company representatives. More Spanish-language radio content on their struggle for land and rights here.

Cultural Survival joins the call by Indigenous Peoples for an immediate moratorium on any activity that includes the entering of foreign persons into Indigenous territories. Further exposure of Indigenous people to COVID-19 must be prevented to avoid extremely detrimental impact.