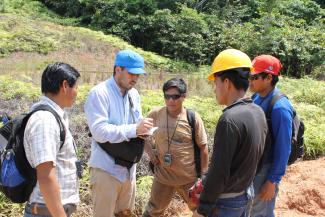 We traveled for five days by car, boat, and two airplanes to reach the remote community of Andoas in the Peruvian Amazon,” says Matilde Chocooj Coc, an Indigenous Q’eqchi Maya
woman from El Estor, a community in the northwest of Guatemala. She, along with two fellow Cultural Survival staff members, made the journey to Andoas in the Loreto region of Peru to learn about the Indigenous Amazonian experience of over 40 years of oil extraction without the free, prior, and informed consent of the communities affected by the drilling. The visit would provide an opportunity for Chocooj Coc and members of the Quechua Federation of the Upper Pastaza (FEDIQUEP) to exchange stories and learn from each other’s experiences of resource exploitation without consent or consultation.

On the boat ride upriver to Andoas, Chocooj Coc began to get a taste of what life was like along the Pastaza River: “The tiny communities seemed to be dedicated purely to fishing and agriculture; from what I could tell, there wasn’t any other occupation. The couples each had five or six children that looked very malnourished, badly dressed, and the women as well. You could see the lack of attention these communities receive from the State.They are very poor,” she says. In Nuevo Andoas, the situation was much the same. The town has literally been built with refuse from the oil company, PlusPetrol, and its predecessor, Occidental Petroleum, whose installation looms over the tiny town.

Upon arriving in Andoas, the Cultural Survival delegation was invited to attend the first day of a training for the Indigenous Environmental Monitors of Andoas and surrounding communities. These monitors play an important role: where the oil companies have caused devastating contamination without proper—or in many cases, any—remediation, the volunteer monitors spend weeks each month trekking through the heavy, humid air of the jungle in order to track down and monitor contamination sites. Their deep familiarity with and love for their territory makes them the most suitable candidates for environmental monitoring; they are able to navigate the difficult terrain, feed themselves along the way, and perhaps most importantly, they are profoundly invested in the outcome.

Cultural Survival’s visit coincided with that of E-Tech International, an environmental technical consulting nonprofit that works largely with Indigenous communities. Ricardo Segovia, an E-Tech environmental engineer, was there to train the monitors to gather precise scientific data on each contaminated site. Chocooj Coc had the opportunity to speak with many of the community monitors, as well as the apus (traditional leaders), as the group hiked through the forest and carefully took notes on sites of extensive oil contamination. She observed that “the oil company does not care about the damage it is causing to the people who live in the area, much less does it consult the communities about whether or not they want the company there. The company worries solely about how much it can earn. They do not use appropriate techniques to avoid contamination of the ecosystem, which is why our Indigenous brothers and sisters now suffer the consequences. Agricultural production of local foods like plantain, yucca, potatoes, and papaya has decreased, as plants no longer bear as healthy or as much fruit as before. This has a major effect since these are families’ principal food sources.”

Further, “the river that provides water to the communities for consumption, cooking, and washing is also contaminated. The people continue eating contaminated fish, as well as wild animals, because they have no other choice, nowhere else to get food from. The Indigenous leaders we spoke with said that when they cook fish, an oil seeps out which carries the odor
of petroleum. The surface of the river water is shiny and some of the water is totally black,” Chocooj Coj reported.

The Indigenous monitors have developed a system that responds actively to the lack of outside support. They take photographs, GPS coordinates, and samples, which they send to outside labs—all of which, according to the monitors, have shown contamination. “It is a very good strategy,” Chocooj Coc says of the monitoring program. “If they weren’t monitoring,
the company would have no qualms about continuing to contaminate the little that is left.” One of the Indigenous Quechua monitors confirms this: “If we weren’t here monitoring on a monthly basis, the company would cover it up.”

The Cultural Survival team had the strange fortune to witness just such a coverup in the apparent overnight disappearance of a contamination site. Upon finding a new site of petroleum contamination—an opaque pond of black, gunky oil—FEDIQUEP Vice President Apu David Chino and community organizer Wendy Piñeda called the Peruvian Environmental Evaluation and Enforcement Agency. The next day when an official arrived to look at the site, the tarry pool had been covered with water and the disastrous spill effectively masked.

FEDIQUEP monitors are divided over the effectiveness of the monitoring program. Monitor Elmer Hualinga believes that little has improved; the health situation remains dire, remediation has been slow or non-existent, and little support has been provided by the State. Yet, others believe that there has been progress, that their documentation and denouncement of PlusPetrol’s careless activity compelled the government to declare an environmental state of emergency and to establish maximum permissible levels of contamination in water for human consumption, as well as leading to some improvement in PlusPetrol’s business practices.

Chocooj Coc was impressed enough by the monitoring program that she wants to bring a similar training to her community so that they can be empowered to document and fight undesired exploitation. Upon returning to Guatemala, she made a point of speaking to local Indigenous leaders about what she had seen. She commented that although there are oil companies in Guatemala, “this [was] the first time I saw something so terrible. I have not seen this level of contamination in Guatemala.” Thus, she wants to ensure that her local leaders take what is happening in Peru—and what could happen in Guatemala—into account when considering any kind of extractive project. “The situation in the Indigenous communities in Peru is similar to ours in Guatemala,” Chocooj Coco says. “In my community, there is mining and also an oil company. The people are getting sick there too. The corporations, in order to
be able to work in a particular place, first promise work opportunities and development to the communities that live there. When they gain access to the territory, they forget their promises to the people and they don’t care that they are destroying Mother Earth. For Indigenous communities, the Earth is our mother, as she feeds us every day.

“I also realized that that our Indigenous brothers and sisters live in extreme poverty. It makes me feel [sad]: why do international corporations dedicate themselves solely to taking our natural resources and they are the ones who become rich while the communities are left with the destruction of our natural resources, illness, and poverty?” Ultimately, though, Chocooj Coc is hopeful: “I believe this is the beginning,” she says. “I believe that what we are doing right now, sharing our experiences with each other, is something that can unite us as Indigenous Peoples, as Indigenous communities, in learning how we can defend our communities.”

To learn more about our Peru: Force Oil Company to Clean Up Spills campaign, visit: cs.org/take-action/peru.