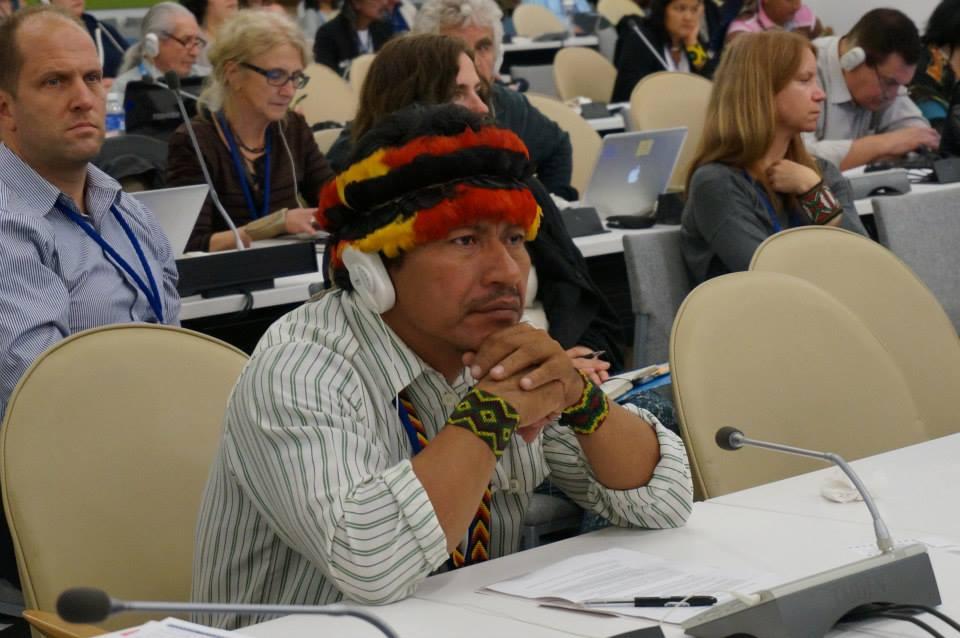 Aurelio Chino Dahua, the "apu," or traditional leader and president of the Quechua Federation of the Upper Pastaza, attended this year's UN Permanent Forum on Indigenous Issues in May in New York city, with the support of Cultural Survival in partnership with the Rainforest Foundation US. Cultural Survival coordinated a meeting for him with both the outgoing and the incoming Special Rapporteurs on the Rights of Indigenous Peoples, James Anaya and Victoria Tauli Corpuz, respectively. Rapporteur Anaya had made an official visit to Apu Aurelio's community, so this meeting was an opportunity for the apu to follow up with the Rapporteur, update him on the situation, and request suggestions for defending his community. It was also a chance for Apu Aurelio to ensure that the devastating oil contamination that is occurring in the Quechua communities was on the new rapporteur's agenda.

Apu Aurelio Chino Dahua is a Quechua leader from a small community on the banks of the Pastaza river, a tributary to the Amazon in Loreto, Peru. He is the President of FEDIQUEP (Federation of Quechua of the river Pastaza) and organizes other Indigenous leaders from the area in their fight against environmental destruction resulting from oil extraction in their forests by Pluspetrol. Apu Aurelio has led a negotiation process to establish consultation with traditional authorities before a the current oil concession is renewed for another term. He believes in revitalizing Indigenous cultural practices and has been a role model for other traditional leaders, or Apus, to retake their traditional dress and face-painting when speaking at important community meetings.

In New York, Apu Aurelio also participated as one of four speakers on Cultural Survival's side event: Principles of good governance: Local governments' use of the UN Declaration on the Rights of Indigenous Peoples and its challenges. He shared with forum attendees the challenges facing his Federation and their plans to develop their own consultation protocol for when companies want to develop their land. Cultural Survival also arranged a meeting for him with representatives of PROINDIGENA, an arm of the German Mission to the UN that works with Indigenous Peoples in the Latin American region, to continue building his network of international support.