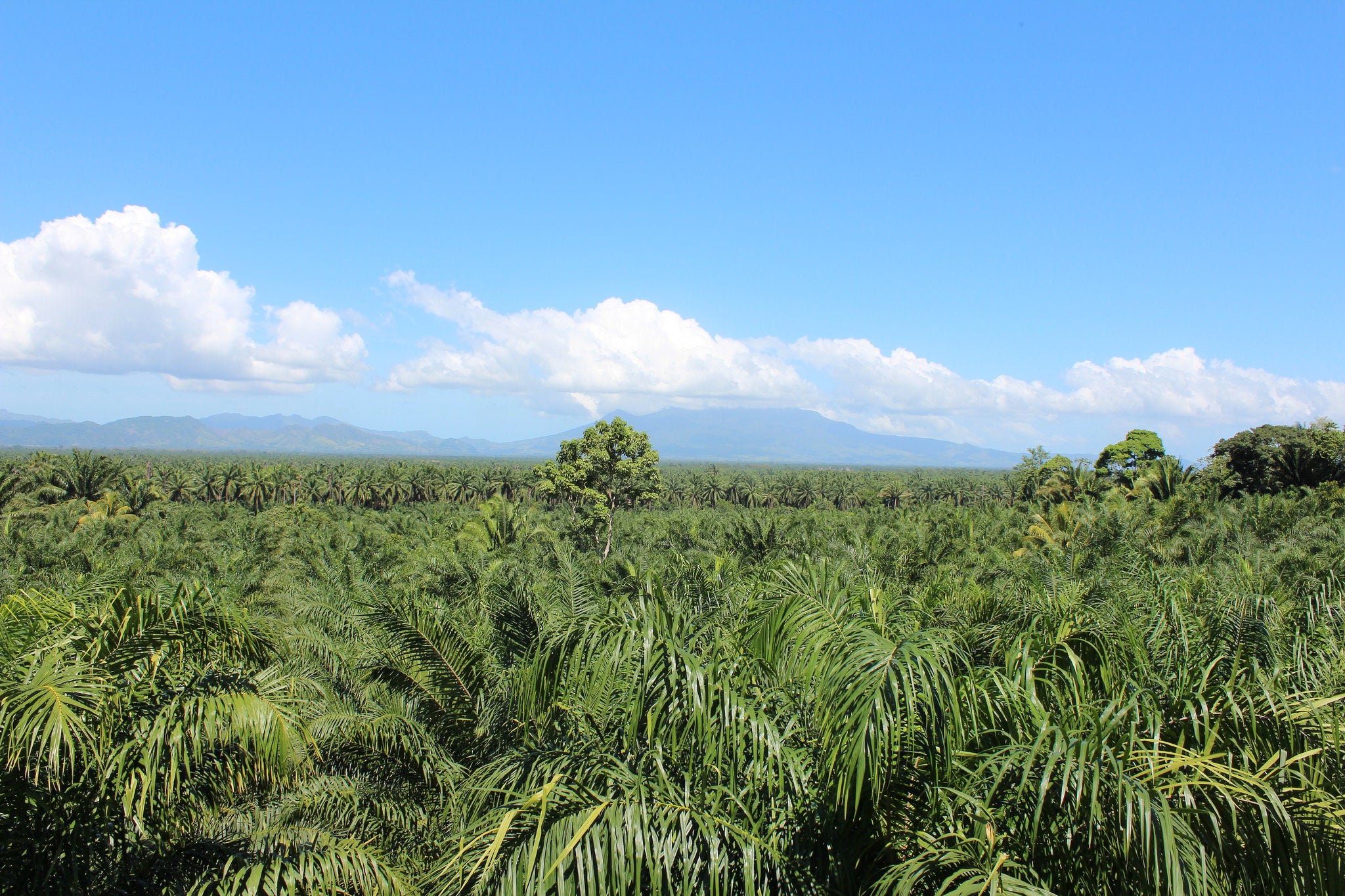 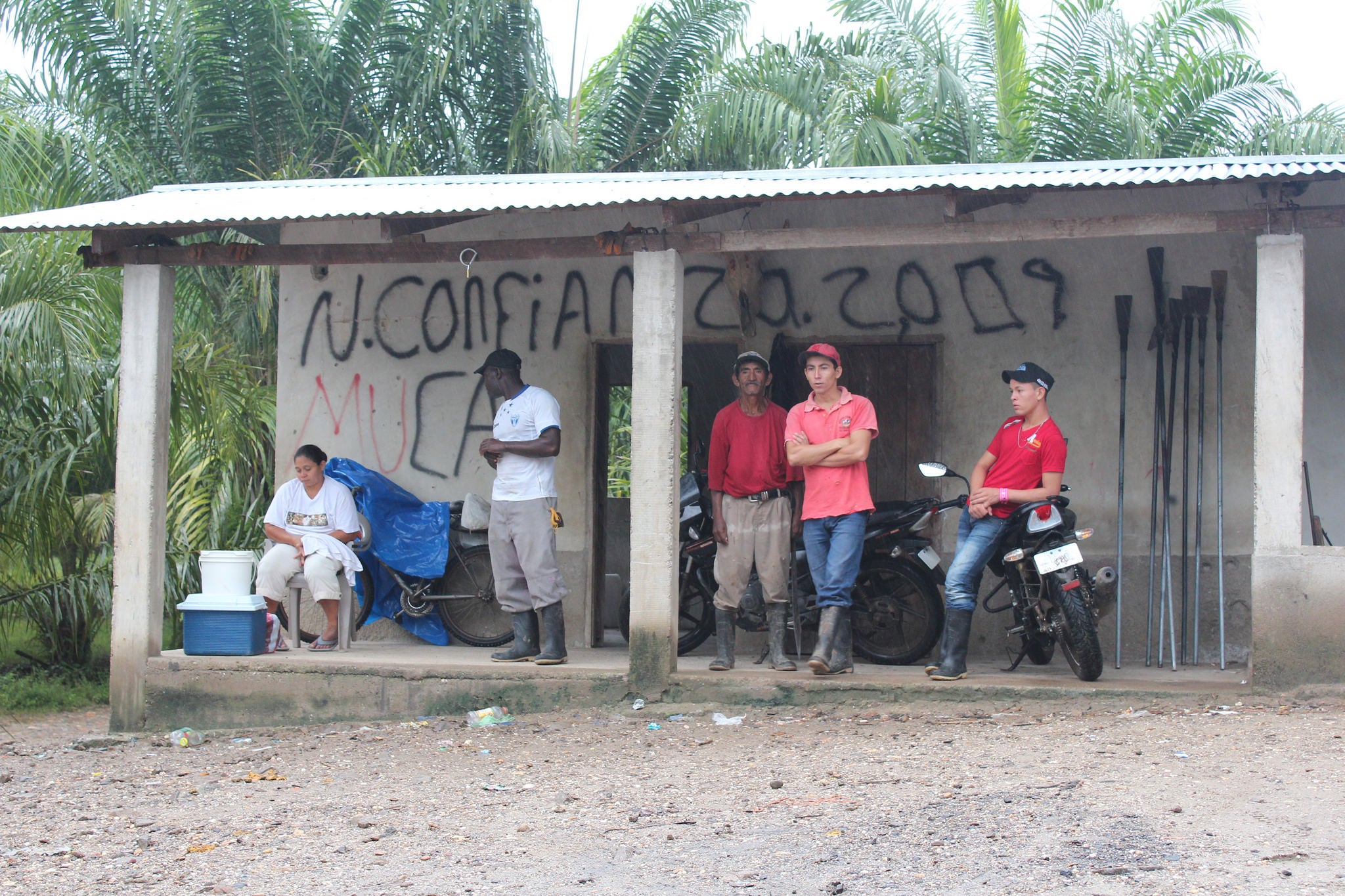 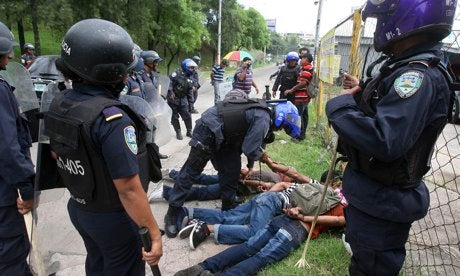 Photos: 1. Oil palm trees extend into the distance in Bajo Aguan, Hondruas, credit ICIJ.  2. The clubhouse where peasants gather in La Confianza. The peasants have operated La Confianza since forcibly seizing it from the Dinant Corporation during the ongoing land conflict in Bajo Aguan, credit ICIJ  3. Honduran police agents detain peasant leaders from Bajo Aguán at a protest in the capital, Tegucigalpa, credit Coolloud.

Miguel Facussé, one of the richest men in Honduras, died on June 22 at age 90. There is no doubt that he will leave behind an impressive legacy. Dinant, Facussé’s multi-million dollar company that manufactures and markets snack products, detergents and biofuels such as African Palm oil, announced Facussé’s death and praised his creation of economic opportunities in Honduras. The true legacy of Miguel Facussé, however, is felt not in the economic opportunities he created, but in the danger and harassment that his business operations.  Locally he is known as "the palm plantation owner of death," reports Democracy Now.

Facussé and private security guards with his company, Dinant, were accused of taking part in violent land grabs and dozens of murders of campesino land activists in Honduras’ Aguán Valley as he sought to expand his palm oil fortune. Diplomatic cables published by WikiLeaks showed the United States knew of Facussé’s role in cocaine trafficking but continued funding Honduras’ military and police, who reportedly worked closely with Facussé’s guards. Facussé backed the 2009 coup that ousted Honduran President Manuel Zelaya; his personal airplane was used to fly Foreign Minister Patricia Rodas out of Honduras against her will.

The Garifuna community in Vallecito, Honduras, have been locked in a violent struggle to reclaim their lands from Facussé for many years. Leaders and organizers have been kidnapped and killed, including Euquerio Bernadez Bonilla, vice-president of an agricultural cooperative and composer, who was murdered in 2004. More recently, on July 27 2014, 20 Garifuna community organizers were detained by heavily armed and masked men.

Though they have recently won title to Vallecito, the Garifuna still face threats of violence and the possibility of the usurpation of their territory. Vallecito is located in between expanding African palm plantations and drug trafficking networks, and therefore faces continuous threats. Facussé’s company owns 60% of the territory surrounding the Garifuna communities, and the property adjacent to Vallecito, known as Farallones, has been tied to drug trafficking in the region. This has had devastating consequences for the Garifuna community. The Inter-American Commission on Human Rights reports:

“The extensive production of African palm in the northern part of the country has had a disproportionate impact on the Garifuna people. The IACHR also received troubling information concerning the impact of human activity in exacerbating poverty in these communities. For example, the Garifuna community of Santa Rosa indicates that as a result of the work done by companies cultivating African palm in the department of Colón, the course of the Aguán River had been changed, with devastating consequences on the environment and on the community’s access to water, due to the water’s high salinity.”

The Garifuna face further threat with the creation of Zones for Employment and Economic Development (previously known as Charter Cities), or “special economic zones governed by foreign governments or corporations where national law does not apply.” While these ZEDEs threaten communities throughout Honduras, Indigenous communities will be the most directly impacted. Karen Spring of the Honduran Solidarity Network reports that the first ZEDE is on the southern coast of Honduras and, if it moves forward, “over 10 communities on the island of Zacate Grande will likely be evicted from their ancestral lands.”

These ZEDEs violate the right to Free, Prior, and Informed Consent stipulated in the UN Declaration on the Rights Of Indigenous Peoples, which was signed by Honduras, and there are no safe ways for Indigenous People to challenge the usurpation of their land. The Inter-American Commission on Human Rights reports that Indigenous leaders who defend their territories and natural resources face acts of violence and death threats.

The creation of ZEDEs in Honduras, of course, are contingent on international support, and while there are those in the U.S. who are protesting the creation of these charter cities--such as the San Francisco protest outside a Seasteading Institute Panel event discussing ZEDEs--the U.S. has historically supported neoliberal agendas in Honduras. The U.S. has also been complicit in the violence and destruction of Indigenous communities. Hillary Clinton has admitted to her involvement in the 2009 coup, and U.S. military aid to Honduras “directly supports the Honduran military who have been present to execute many of the violent evictions of Indigenous and rural communities.”

In light of the death of Facussé, it is difficult to predict the future for the Garifuna of Honduras. Gilberto Ríos, former county director of FIAN International, suggests that nothing will change as a result of Facussé’s death. He claims that the violence and kidnappings will continue “with Facussé or without Facussé.” Whether or not this violence continues, the implementation of the ZEDEs will  sustain the threat on Garifuna land.

In the first 2 weeks of July 2015, in commemoration of the 6th anniversary of the coup d’etat, the film Resistencia is available for free online. This documentary depicts the resistance movement of the people of the Aguan Valley in Honduras. It was recently screened at the Quebec Film Festival in Montreal, and has made appearances all over the world. Watching the film, and sharing these stories, can help to challenge U.S. policies in the region and bring international attention the struggles of the Indigenous People in Honduras.

Resistencia: The Fight for the Aguan Valley from Makila, Coop on Vimeo.