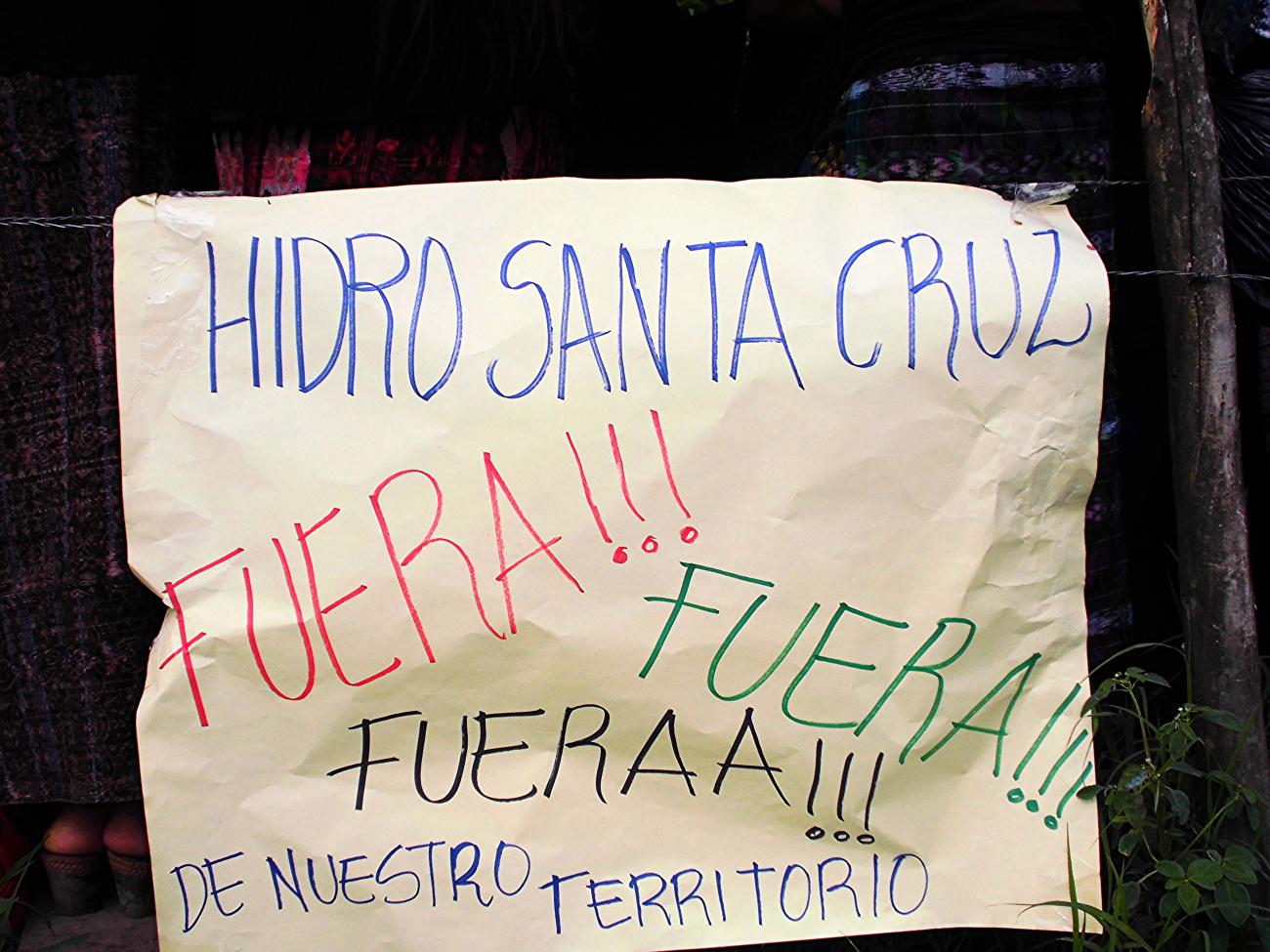 Women of Santa Cruz Barillas holding a sign telling Hidro Santa Cruz to get out of their territory. Photo by Luis Miranda Brugos.
Versión en español

In Santa Cruz Barillas in Huehuetenago, Guatemala, another prominent voice in the fight against Hidralia Energia - Hidra Santa Cruz, was detained as a political prisoner by Guatemalan officials without evidence. Bernardo Ermitaño López Reyes, known as Don Taño, is a valiant advocate for Indigenous rights, willing to confront those who oppose the village’s plights face-to-face. He has been a strong voice and force against the past three years of violence, repression, unconstitutional arrests, military presence, and violations of human rights in the village. Don Taño was arrested while accompanying three previously detained advocates, Arturo Pablo, Adalberto Villatoro and Francisco Juan, to a hearing regarding their arrest. He was taken as a political prisoner while outside of Barillas, and was transferred to the jail at Torre de Tribunales in Guatemala City, where he had to spend the night without food. He was detained in an arbitrary arrest without evidence, where his constitutional and human rights were not respected.

The region has been fraught with conflict over the past few years, marked most notably by a military invasion throughout three weeks in May 2012, after private security guards from the Spanish hydroelectric company Hidro Santa Cruz shot and killed a Q’anjobal community leader outspoken against the dam and protests broke out.  Since then, communities in the surrounding area have renewed their opposition to external projects licensed by the government that violate the right to their ancestral territories. As a member of Nuevo Amanecer, Don Taño has been one of the leaders of the organized peaceful resistance against the hydroelectric company and its plans to continue with the project.

Since 2009, Hidro Santa Cruz has been planning a series of dams on the Q’am B’alam river that surrounds the town of Santa Cruz Barillas. The river and its three waterfalls are considered sacred by the Q’anjob’al community, whose ancestors named the river “yellow tiger” in the Q’anjobal language after the animal that was said to drink from its waters. The project would be installed in an area used by the community for ceremonial, recreational, and agricultural purposes. The project will also have significant impacts on the already fragile natural environment. A study by the International Commission on Tropical Biology and Natural Resources found the area of Barillas to be of the highest priority for conservation efforts within Guatemala. Barillas is home to many amphibian and insect species found nowhere else in the world.

The community has twice held referenda and voted unequivocally to reject the exploitation of its natural resources by transnational companies. Nevertheless, the government approved the Cambalam I dam, without the Free, Prior, Informed Consent of the community. To date, 19 men have been arrested after speaking out against the dam and have been held imprisoned for up to 8 months at a time before eventually being released due to lack of any evidence of having committed crime. Two men have been killed, one, Andres Francisco Miguel, was shot by security guards of the company in 2012, and another, teacher Daniel Pedro Mateo,was kidnapped while on his way to a community meeting training environmental defenders in 2013, and found later with signs of torture.

Don Taño has been detained since June 2, 2015, unable to provide for his family and five sons. He has lived in the village since he was born there in 1960 and has been a very active member and leader in the community. Dedicated to agricultural work, he has brought energy and leadership to the community, especially in the past three years. His arrest came just days after a celebration and ceremony surrounding Poza Verde, a sacred area by the bank of the Kan B’alam river. This ceremony signified the effort to preserve natural land and resources and reinforce the village spiritually. The community’s continued effort to peacefully resist the dam project has been admirable, organized, and consistent despite the violence and human rights violations rampant in the village. Don Taño joins the 18 others arrested in the cause of defending life and the rights of the people of Santa Cruz Barillas in opposition of Hidro Santa Cruz.

Daniel Pedro Mateo with his wife before he was kidnapped and murdered.

Cultural Survival stands with the Q’anjobal community in demanding the release of Don Taño, along with the other three men recently detained. The continued arbitrary arrests of community leaders is deplorable and a grave violation of the UN Declaration on the Rights of Indigenous Peoples, the UN Declaration on Human Rights Defenders, Convention 169 of the International Labor Organization, and numerous other documents that establish Indigenous Peoples' rights to their lands, the right to defend their land, right to self-determination, and the right to peacefully assemble.

The community has made the following demands: