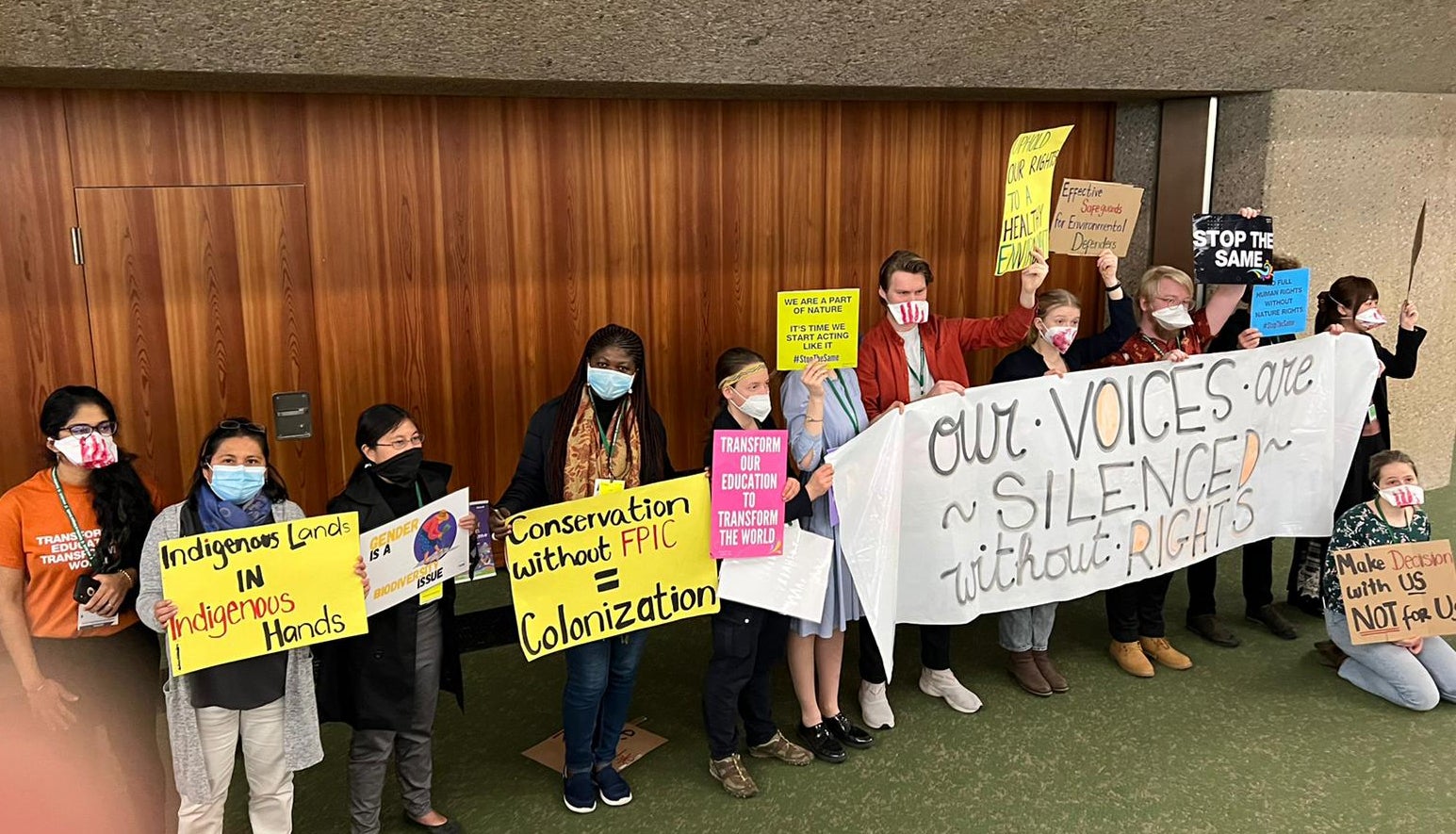 
The Convention on Biological Diversity is an international, multilateral treaty that was initially signed by 150 government leaders at the 1992 Rio Earth Summit and later became active on December 29, 1993. This 30-year-old agreement to date has been ratified by 196 countries to respect natural and biological resources with “goals: to protect biodiversity; to use biodiversity without destroying it; and, to share any benefits from genetic diversity equally.” The CBD recognizes that “biological diversity is about more than plants, animals and microorganisms and their ecosystems – it is about people and our need for food security, medicines, fresh air and water, shelter, and a clean and healthy environment in which to live.”

The Post-2020 Global Biodiversity Framework aims to guide actions worldwide through 2030, “to preserve and protect nature and its essential services to people and builds on the Strategic Plan for Biodiversity 2011-2020. It sets out an ambitious plan to implement broad-based action to bring about a transformation in society’s relationship with biodiversity, ensuring that by 2050 the shared vision of ‘living in harmony with nature’ is fulfilled.”

Article 25 of the Convention on Biological Diversity established “an open-ended intergovernmental scientific advisory body known as the Subsidiary Body on Scientific, Technical and Technological Advice (SBSTTA) to provide the Conference of the Parties (COP) and, as appropriate, its other subsidiary bodies, with timely advice relating to the implementation of the Convention. As a subsidiary body of the COP, SBSTTA is to report regularly to the COP on all aspects of its work. Multidisciplinary and open to participation by all Parties, SBSTTA comprises government representatives competent in the relevant field of expertise. Its functions include: providing assessments of the status of biological diversity; providing assessments of the types of measures taken in accordance with the provisions of the Convention; and responding to questions that the COP may put to the body.” 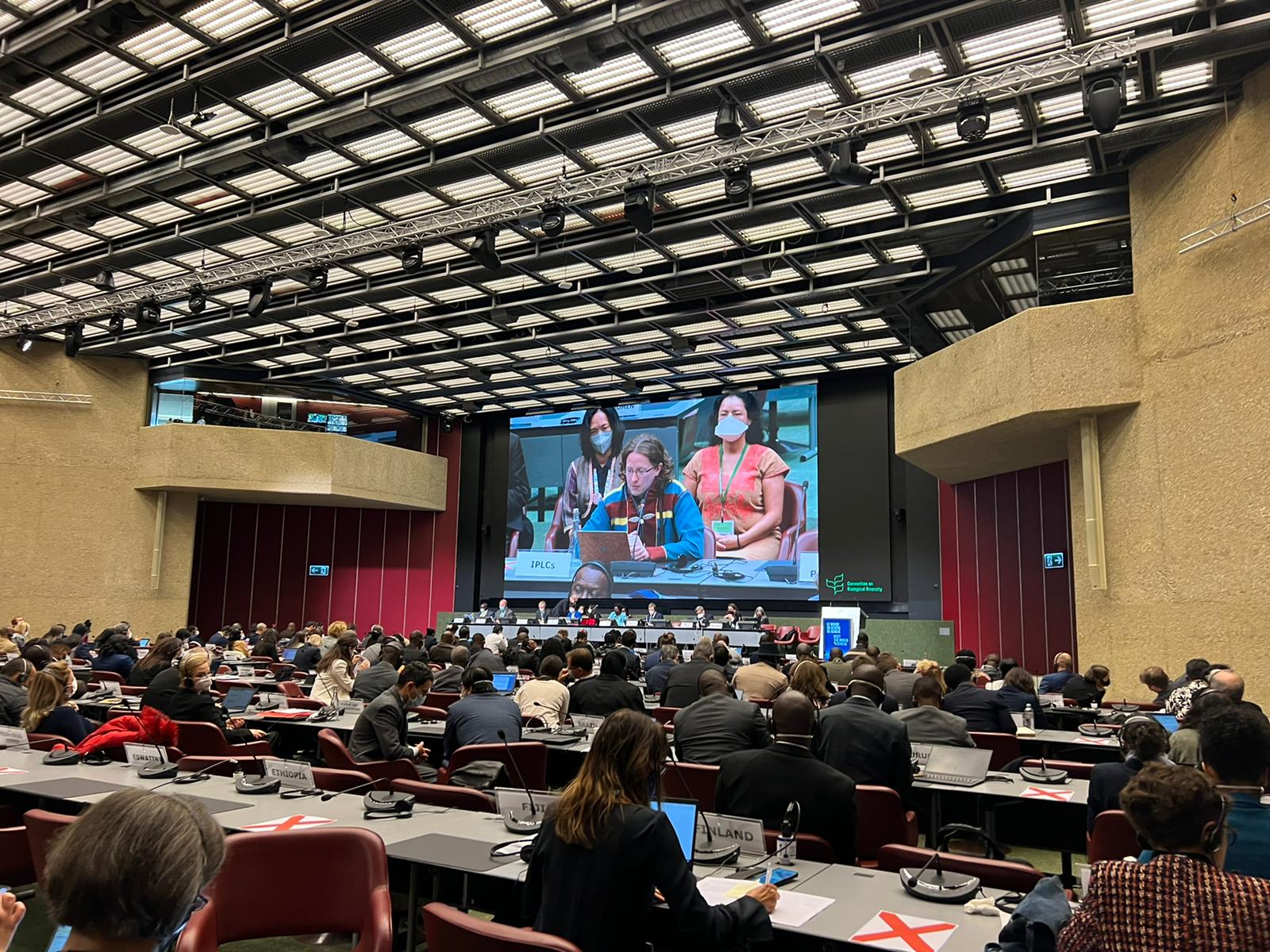 
Yet, Indigenous Peoples are the ones experiencing direct negative impacts of the collapse of ecosystems. The United Nations states, “Climate change poses threats and dangers to the survival of Indigenous communities worldwide, even though they contribute the least to greenhouse emissions. In fact, Indigenous Peoples are vital to the many ecosystems in their lands and territories and help enhance the resilience of these ecosystems. In addition, Indigenous Peoples interpret and react to the impacts of climate change in creative ways, drawing on traditional knowledge and other technologies to find solutions that society at large can replicate to counter pending changes.”

Therefore, any discussions or decisions related to natural and biological resources need to involve Indigenous Peoples, particularly where it has a direct impact on their lands and livelihoods. Indigenous Peoples are concerned that biodiversity conservation initiatives being promoted and implemented on their territories are excluding their meaningful participation and Traditional Knowledge. However, the direct participation of Indigenous Peoples is vital to ensuring successful solutions to address and mitigate the climate change crisis. 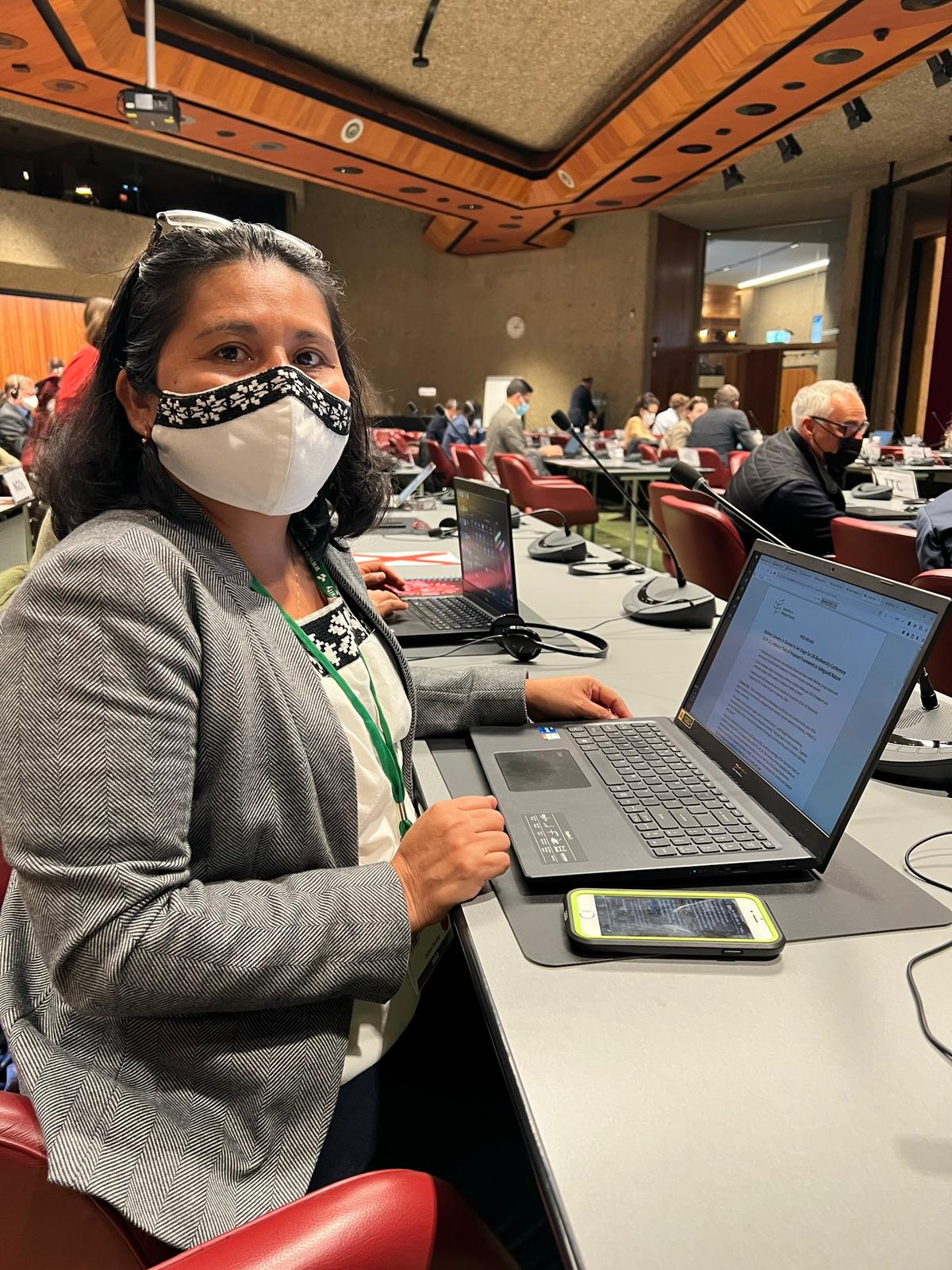 I followed discussions and decisions related to the Post-2020 Global Biodiversity Framework (WG2020-3), particularly Target 3. Target 3 is commonly referred to as the 30x30 Initiative and is a plan to increase conservation of land and sea areas up to 30 percent by 2030, and to do so using area-based conservation measures such as protected areas or parks. The draft language of Target 3, which was being negotiated at the recent meetings, holds, “[e]nsure that at least 30 percent globally of land areas and of sea areas, especially areas of particular importance for biodiversity and its contributions to people, are conserved through effectively and equitably managed, ecologically representative and well-connected systems of protected areas and other effective area-based conservation measures, and integrated into the wider landscapes and seascapes.” Indigenous Peoples for good reason are wary of this initiative as some of the last remaining areas of biodiversity are found on their territories. We are concerned that we may be deprived of our lands and kept from accessing our traditional hunting, gathering, and spiritual spaces, particularly if conservation initiatives are poorly implemented.  Indigenous Peoples feel that the 30x30 initiative and other conservation models being used could likely continue to result in grave human rights violations, including the removal and eviction of Indigenous Peoples from their ancestral lands. The protected areas model has infringed on the rights of Indigenous communities as it keeps people out of the conservation equation. It does not acknowledge the contributions of Indigenous Peoples in protecting and conserving biodiversity, instead criminalizes them. Aslat Holmberg (Sami), a participant from Norway, says “our traditional fishing practices have been criminalized in the name of conserving the fish stocks.” 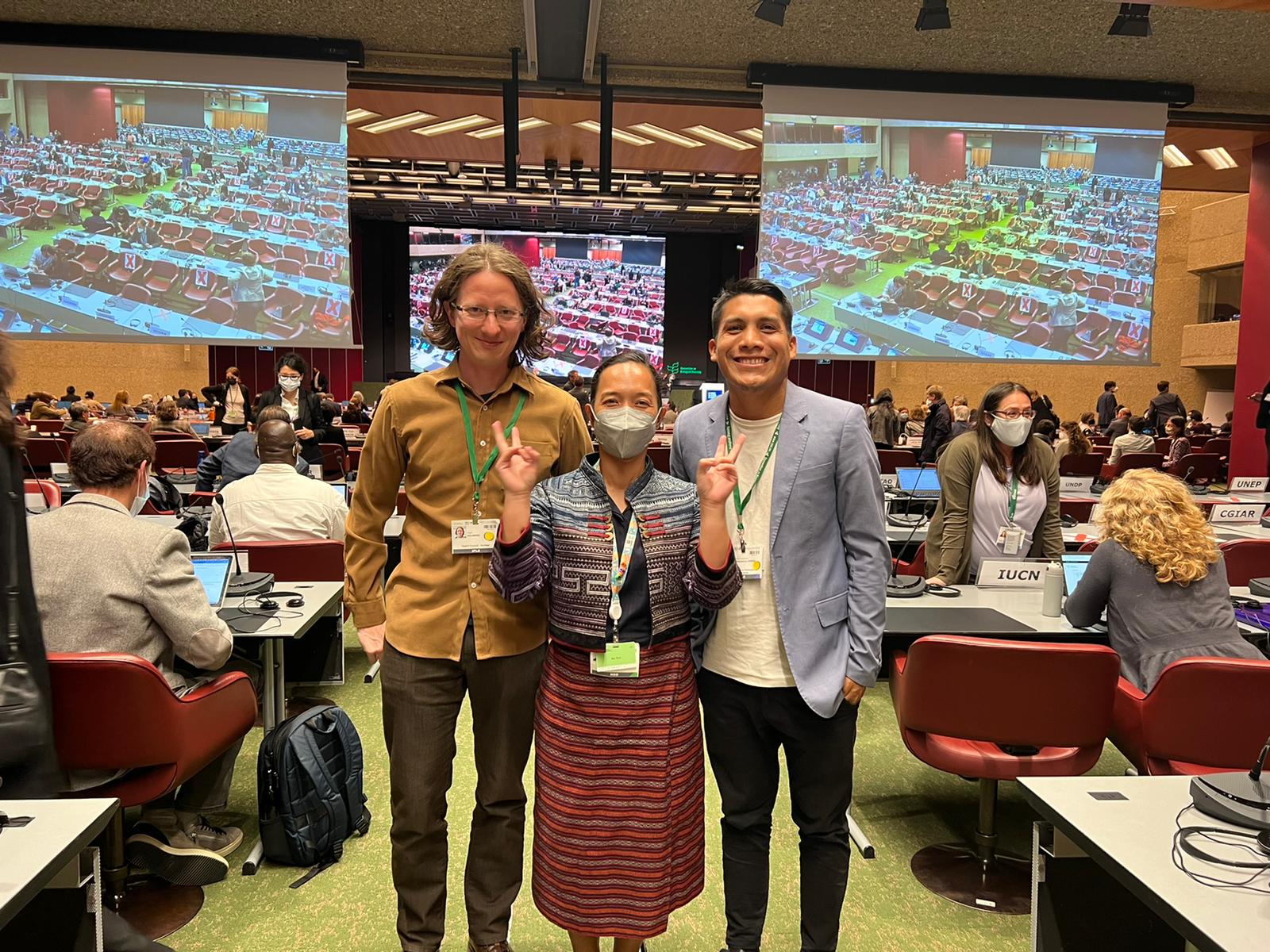 Members of IIFB Caucus remain hopeful on the concluding day of CBD meetings.

While Indigenous Peoples recognize that it is important to protect biodiversity, conservation and climate change mitigation efforts should not violate the rights of Indigenous Peoples to lands and territories. Therefore, Indigenous Peoples participating in the meetings were particularly concerned with Target 3, as, without our input, it could have catastrophic impacts on our communities. Negotiations on the part of Indigenous Peoples with governments, intergovernmental agencies, and others focused on applying a rights-based approach. A high priority for Indigenous Peoples at the forum was to ensure that recognition and respect for human rights are considered fundamental to the success of the Global Biodiversity Framework. Commenting on the Target 3 test as referenced above, Jennifer Tauli Corpuz (Kankana-ey Igorot) from the Philippines and Global Policy and Advocacy Lead for Nia Tero, says,“[o]ne of our demands is for Indigenous territories and Indigenous rights, including Free, Prior and Informed Consent to be reflected in the text.”

For many years, one of the criticisms against the Framework, such as in the goals, targets, reporting, and monitoring, is that it is in many respects silent on the issue of human rights. However, Indigenous Peoples are cognizant that applying a rights-based approach would mean including women, youth, and Indigenous Peoples. This would help to avoid or reduce the potential for biodiversity policies to violate human rights and would allow for a successful implementation of the overall Framework goals.

Interventions and negotiations made by Indigenous leaders at these meetings highlighted the need for the inclusion and respect for human rights including the right to self-determination and Free, Prior and Informed Consent, with the overall goal to include a rights-based approach in the Post-2020 Global Biodiversity Framework as well as other frameworks. The general results of these meetings were positive. There was support for issues of high importance to Indigenous Peoples such as the inclusion of rights language in many of the targets, among others. The High Ambition Coalition for Nature and People (HAC) is an intergovernmental group of countries, including governments from Africa, Asia, Europe, Oceania and the Americas, with the goal of securing a global deal for nature and people that can halt the accelerating loss of species and protect the vital ecosystems that safeguard human health and economic security. The HAC appears to support the inclusion of Indigenous rights in Target 3. However, Indigenous Peoples are still concerned that this progress is slow and discussions were delayed for future CBD COP 15 meetings and other intersessional processes such as follow up meetings planned for June 2022 in Nairobi, Kenya. For Indigenous Peoples on the forefront, it feels as if governments are not moving fast enough to solve the biodiversity crisis. 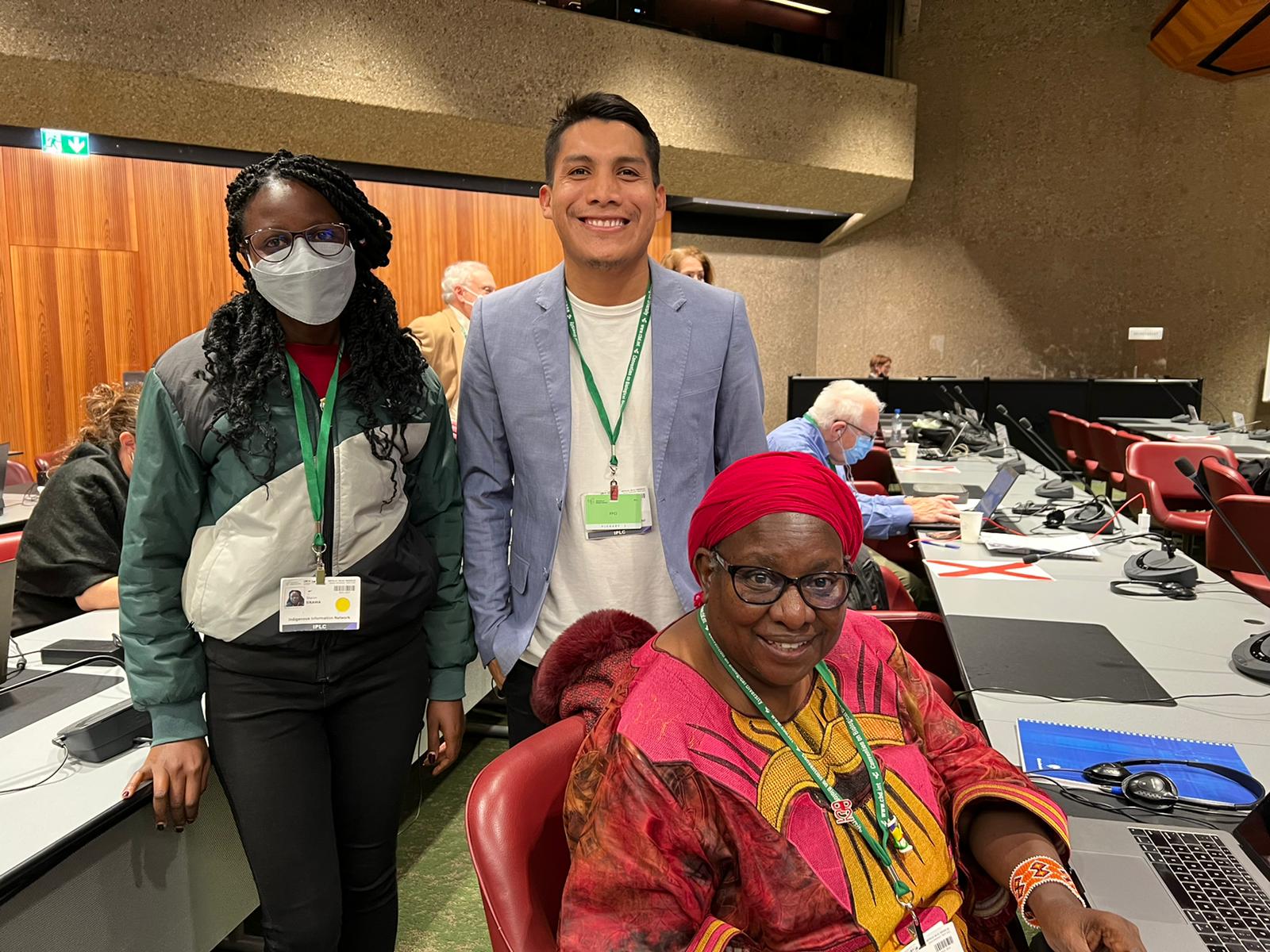 Additionally, there is concern about the allocation of funding and that funding is not reaching Indigenous communities directly. The IIFB states, “currently, hardly one percent of the funds that are available for the climate and the environment goes to IPLCs [Indigenous Peoples and Local Communities] despite growing evidence that supporting IPLCs directly is one of the most cost-effective measures for conservation. Therefore, it is necessary to increase funds to support our strategies. We require flexibility and specific guarantees to access resources directly, that the allocation of funds prioritizes the recognition and respect for indigenous land, territories, and the strengthening of governance. It is time that greater resources are directed to IPLC's self-determined priorities for the implementation of the GBF.”

While the general feel of the resumed CBD meetings was successful, much work is still needed to achieve goals. For the CBD to have continued success, it will require the full and effective participation of women, youth, and Indigenous Peoples, as well as it must incorporate a rights-based approach in its implementation. The CBD must also recognize the immense contributions of Indigenous Peoples in protecting Mother Nature as carriers of Traditional Knowledge in protecting biodiversity and must recognize that Indigenous Peoples are already implementing solutions to climate change through traditional forest management, resilient and thriving food systems, and innovative approaches related to the well being and health of Indigenous communities and ecosystems. 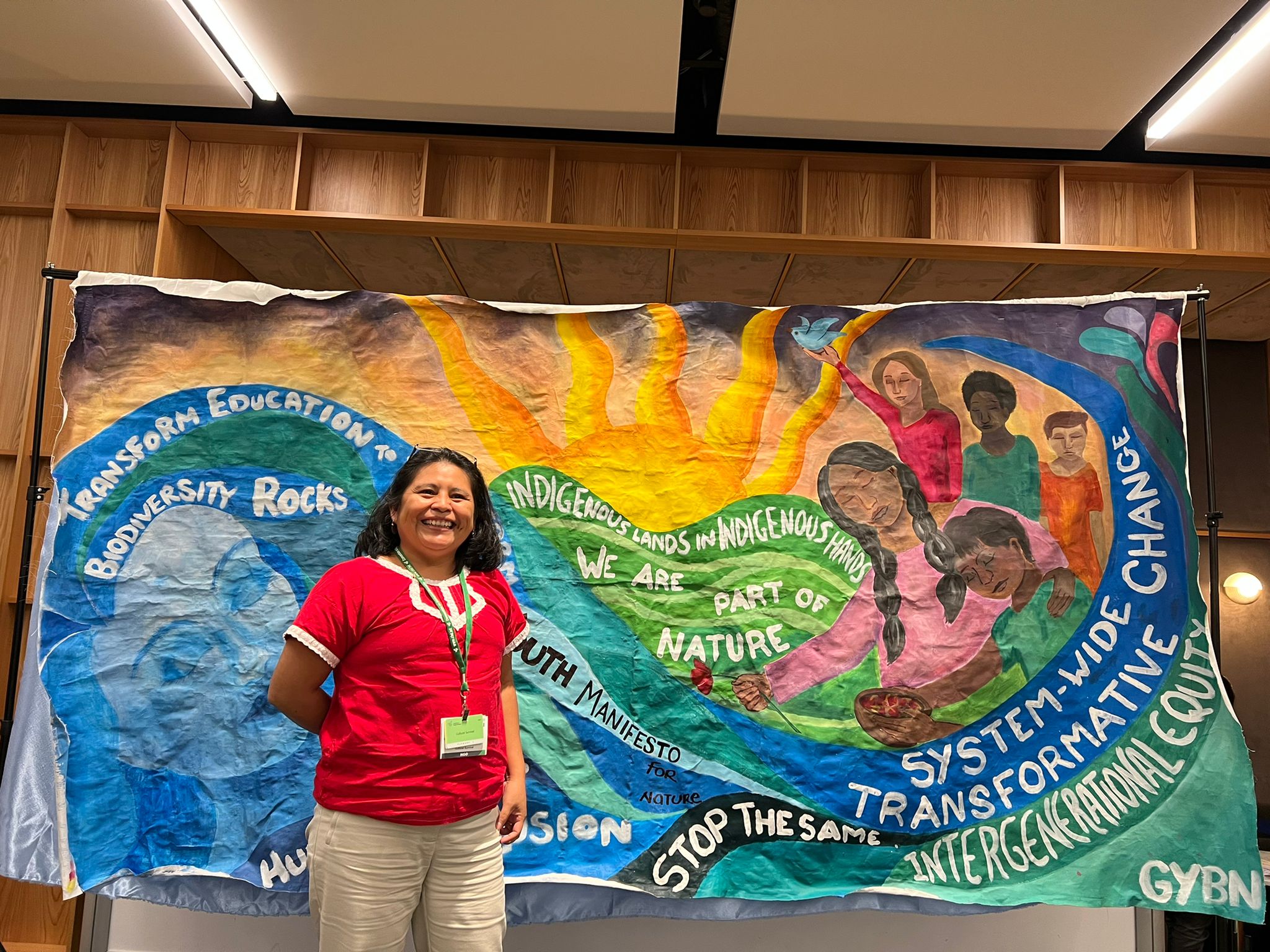 Learn more about the Convention on Biological Diversity and Indigenous Peoples.