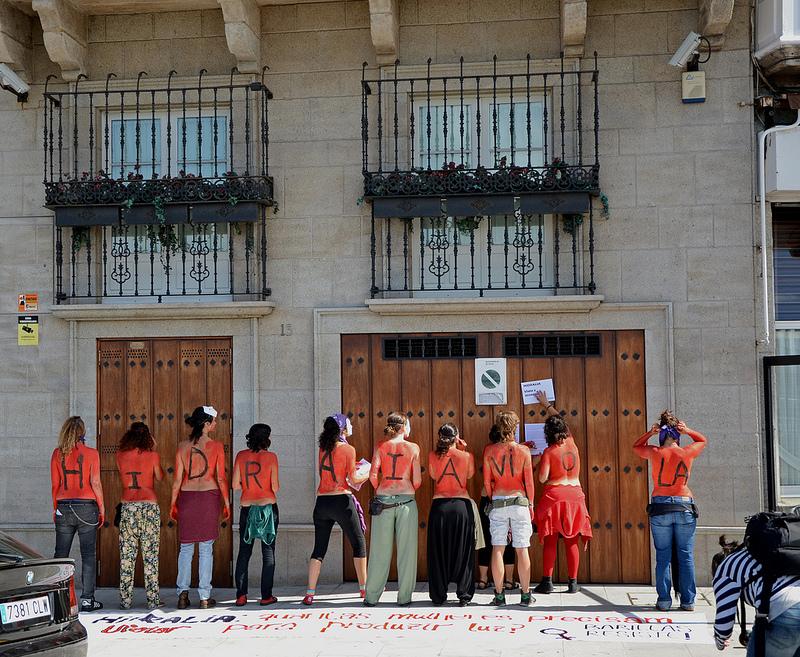 Hidralia Energia’s actions in Guatemala have drawn attention to the company back in its hometown of Galicia, Spain, where a protest was held on August 30th.

A feminist group in Galicia, Spain demonstrated in solidarity with the women of Barillas at the headquarters of another company owned by the Valdivia brothers, owners of Hidralia Energia, the parent company of Hydro Santa Cruz, responsible for the Cambalam dam project in Huehuetenango, Guatemala. Painted in red, the group of women held signs outside the building that mirrored posters held by women in Barillas– “Hidralia: How many women do you need to rape to produce energy?”

Protest in Spain reads, "Hidralia: how many women do you need to rape to produce energy?" (translated from Galician)

Women of Barillas, Guatemala held up this sign during a protest against Hydro Santa Cruz, Hidralia's local subsidiary.

Since the company arrived to Barillas after running from court cases in Galicia, they have brought fear, conflict, and violence to the Q’anjob’al Mayan town. After a community leader was shot and killed by the company’s private security forces, the president of Guatemala, a former general during Guatemala’s armed conflict, declared martial law and sent in military forces and riot police to quell local reactions against the company.

“For the women of Barillas, militarization is a weapon that uses their bodies,” declared the feminist group. “The uniform presence in their community becomes a constant threat of sexual abuse, harassment, and rape. There is a powerful link between the expropriation of natural resources and sexual violence, the systematic expropriation of women’s bodies. As a group of feminists from Galicia, we position ourselves in solidarity with the struggle of the Mayan communities of Barillas, in particular to the struggle of women, besieged by threats, harassment, intimidation, and sexual violence,” they manifested.

Learn more about the Q'anjob'al Mayan people's fight to stop a dam on their sacred river in Guatemala.  Visit our campaign and take action, here.