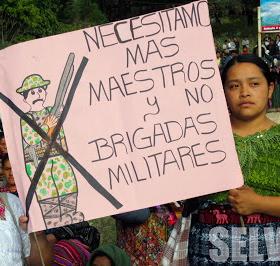 Over the last two weeks of May, residents of Santa Cruz Barillas, Guatemala have been surprised on three separate occasions by military presence in their communities. The area has been under high surveillance ever since a state of martial law was declared in the month of May 2012 and community members active against a hydro-electric dam were named “terrorists and drug traffickers” by the Perez Molina administration.

On May 20th, a military unit comprised of eight uniformed combat soldiers marched into the community of B’ontaq, in Santa Cruz Barillas.  Elders of the community, who were reminded of the military invasions of the 1980s Guatemalan armed conflict, made calls to the local Q’anjobal Indigenous government to accompany them.  The Q’anjobal authorities questioned the soldiers on their purpose in the village and asked to see their badges, but the soldiers refused to provide any military or personal IDs.

Almost at the same hour, a unit of 100 police and military arrived in a near by town of San Mateo Ixtatán.  They were escorting personnel of the company, who were traveling in a private vehicle. The local Q’anjobal government stopped the group asking the objective of the incursion, but were denied information and threatened by two members of the unit who pointed their firearms at a community leader.

“Thankfully, the peaceful and responsible community government leaders make sure that our people do not fall victim to the provocation to violence that we experience regularly,” wrote a collective of Indigenous Nations of the area.

The Q’anjobal authorities have informed the Guatemalan Human Rights office but have not yet received an explanation of these most recent military invasions.

In the village of Yichk’isis, a permanent military base has been established to facilitate corporate personnel visits to the area.  “The community feels it’s being held hostage by the military,” explained  the Assembly of Peoples of Huehuetenango, or ADH.

“The presence of the military and the national police force in the Q’anjobal territory has been established not to guarantee the safety of the population, but to protect the interests of big business and their personnel.”  The collective has demanded that the military be removed from these villages: “The people of Huehuetenango are not terrorists, and we are not instigating conflict.”

Read more about our campaign: Guatemala: We Are All Barillas- Stop a Dam on Our Sacred River!