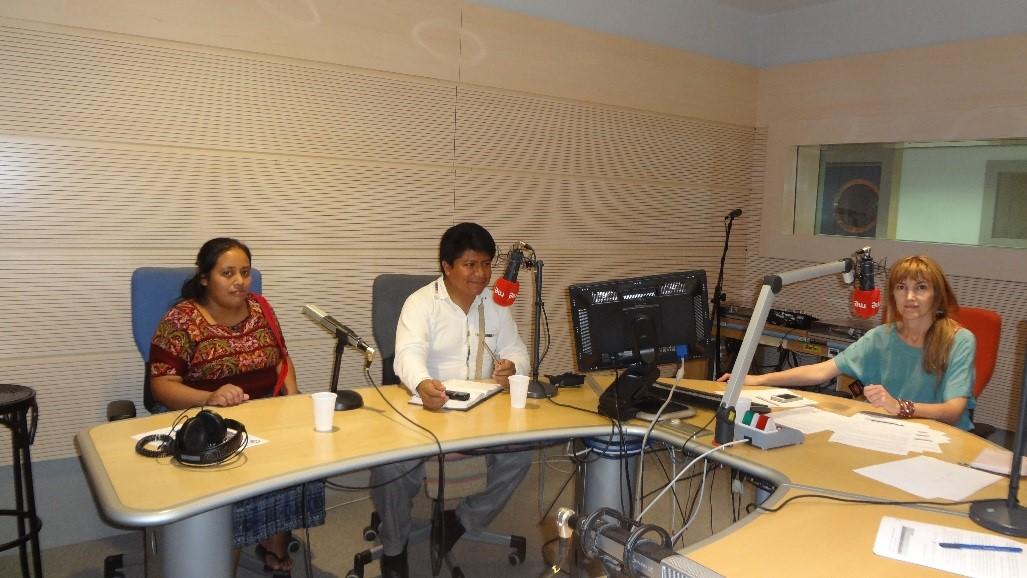 Traditional Mayan authorities from Huehuetenango, Guatemala traveled to Spain in early July on a tour to raise awareness about the systematic human rights abuses experienced by their peoples at the hands of Spanish companies including Hydro Santa Cruz, a hydroelectric company operating in Santa Cruz Barillas, Guatemala. The Plurinational Government of the Q’anjob’al, Chuj, Akateka, and Popti’ and Mestizo peoples of Huehuetenango, including a representative of the community of Santa Cruz Barillas, and Santa Eulalia, visited Madrid and Barcelona on their tour.

They met with international organization Friends of the Earth, Spanish lawyers, were interviewed on public radio in Madrid, and met with Dr. Elizabeth Odio Benito, Vice-President of the International Criminal Court to consult on the issue of criminalization of human rights defenders.  Once identified as leaders of social movements and human rights defenders, the public prosecutor’s office has ordered the capture and arrest of dozens of people in Huehuetenango, on trumped-up charges like drug-trafficking and terrorism.  “In reality, peaceful resistance and community consultations have not been taken into account by the government of Guatemala. Instead, they government uses these statements to target us and criminalize our protests, repeatedly violating our rights,” explained Alfredo Baltazar, Q’anjobal leader and delegate of the plurinational government.

Q’anjobal leader Micaela Antonio explained her community’s resistance against the threats of Hydro Santa Cruz. “What we want is to live in peace. We don’t want to be fighting with anyone, we are women who want better lives for our children. If Hydro Santa Cruz offers us development, we need to ask ourselves, when will this benefit us? Our people are not partners in these projects.  As women, we have suffered. We are devoting time to the resistance while we could be working, earning money for our families. Until Hydro Santa Cruz leaves, we will continue suffering.”

They reinforced the message to the Spanish audience: “Our people want to continue to contribute to development of our country, but a model that imposes development on us is not possible.”

Read more about the Q’anjobal people’s fight to defend their environment at our campaign, Guatemala: We Are All Barillas- Stop a Dam on Our Sacred River!