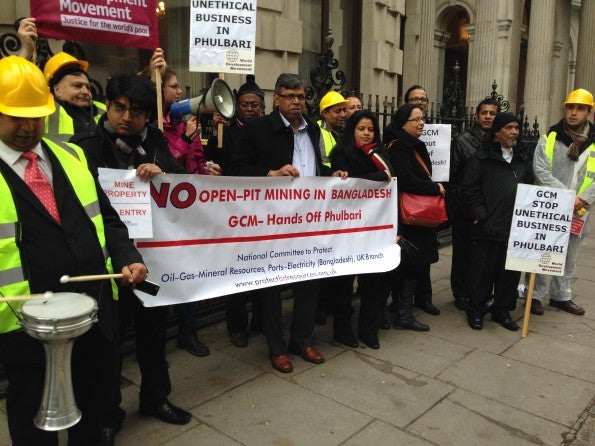 Global Coal Management Resources (GCM) wants to bulldoze 12,000 acres of Bangladesh’s most productive agricultural land and replace it with one of the world’s largest open-pit coal mines. By their own account, they would forcibly displace 40,000 people in the Phulbari region, including at least 2,200 Indigenous people whose history in the area dates back 5,000 years. Seven UN human rights experts have called for an immediate halt to the project.

The Phulbari coal project has been on hold since 2006 due to intense local opposition. Three people were killed and many more injured when paramilitary officers opened fire on a protest against the mine in 2006.

The General Assembly was marked by the absense of two of the company's directors, Guy Elliott and Dato’ Md Wira Dani Bin Abdul Daim, who were recently appointed in June and October respectively.  None of the board of directors on the board last year remain this year, and in February GCM Resources’ executive Grahram Taggart resigned.  The instability of the company was pointed out by a shareholder, who facetiously offered Michael Tang, the only director present for the meeting, a job painting his fence for the weekend, noting he might soon be out of a job.

The London Mining Network owns shares of GCM and was able to lobby the company from the insde through proxies.  Visit their website to read Richard Solly's blog on the meeting.