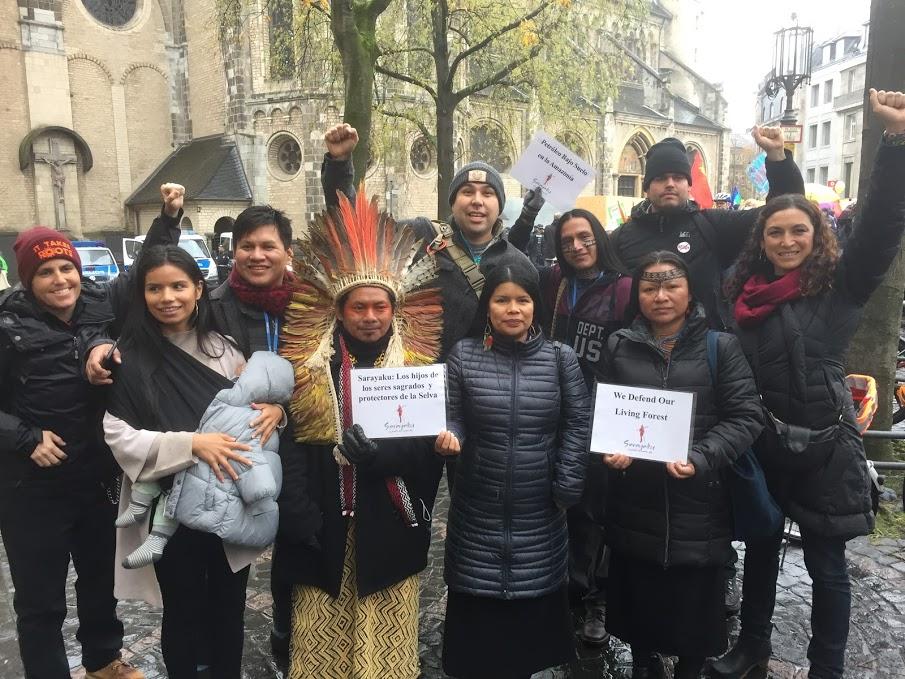 On November 6-17, 2017, a delegation of Indigenous Kichwa leaders from the community of Sarayaku, deep in Ecuadorian Amazon, accompanied by Amazon Watch, traveled to the 23rd Conference of the Parties (COP23) to the United Nations Framework Convention on Climate Change in Bonn, Germany, to promote their Kawsak Sacha ("Living Forest") proposal -- a comprehensive vision for living in harmony with the natural world based upon their ancestral practices.

The Kawsak Sacha “Living Forests" vision is vital for many reasons, most fundamentally that maintaining the ecological balance of the Amazon is essential to Earth's health and capacity to mitigate climate change. The Amazon has long played the critical role of sequestering carbon but rapidly on its way to losing this sink function and become a carbon source due to deforestation. Consequently, protecting the Amazon rainforest, the largest of the world's tropical forests, must be central to climate change discussions and policies. 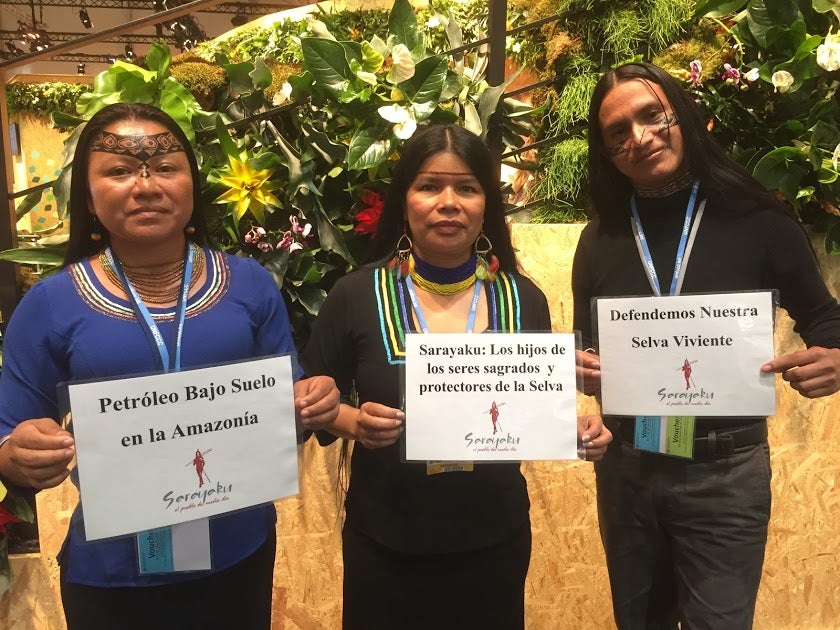 “My message here at COP 23 for the people, for allies of the world, is that we need to fight together, unite forces, because the states that are here speaking in our name are at a negotiating table where supposedly they are looking for solutions, but these solutions are for them, not for Indigenous peoples. Our people are in our communities, while they are here making decisions for us. They are putting prices on our natural resources, they are putting prices on us, without fully comprehending that within our territories we exist as communities with huge wisdom, knowledge, science, technology. So we are asking allied peoples to keep resisting, because this fight is how we must maintain life, and to have the freedom to express ourselves, " said Mirian Cisneros, president of Sarayaku.

The Kichwa from Sarayaku are gaining ground in alliance with Indigenous and frontline communities around the world working to defend the sacred and keep oil in the ground, including a strong bond with indigenous peoples of the Standing Rock community. As Franco Viteri, a historic Kichwa leader remarked during his visit to Standing Rock in September 2016, “My people are very conscious, because of our history and our tradition, just like the tribes here, of our connection with nature, with Mother Earth; we know that this is what gives balance to life here on earth. The transnational corporations, like those trying to build this oil pipeline, are blind because they don’t understand the language of nature.” 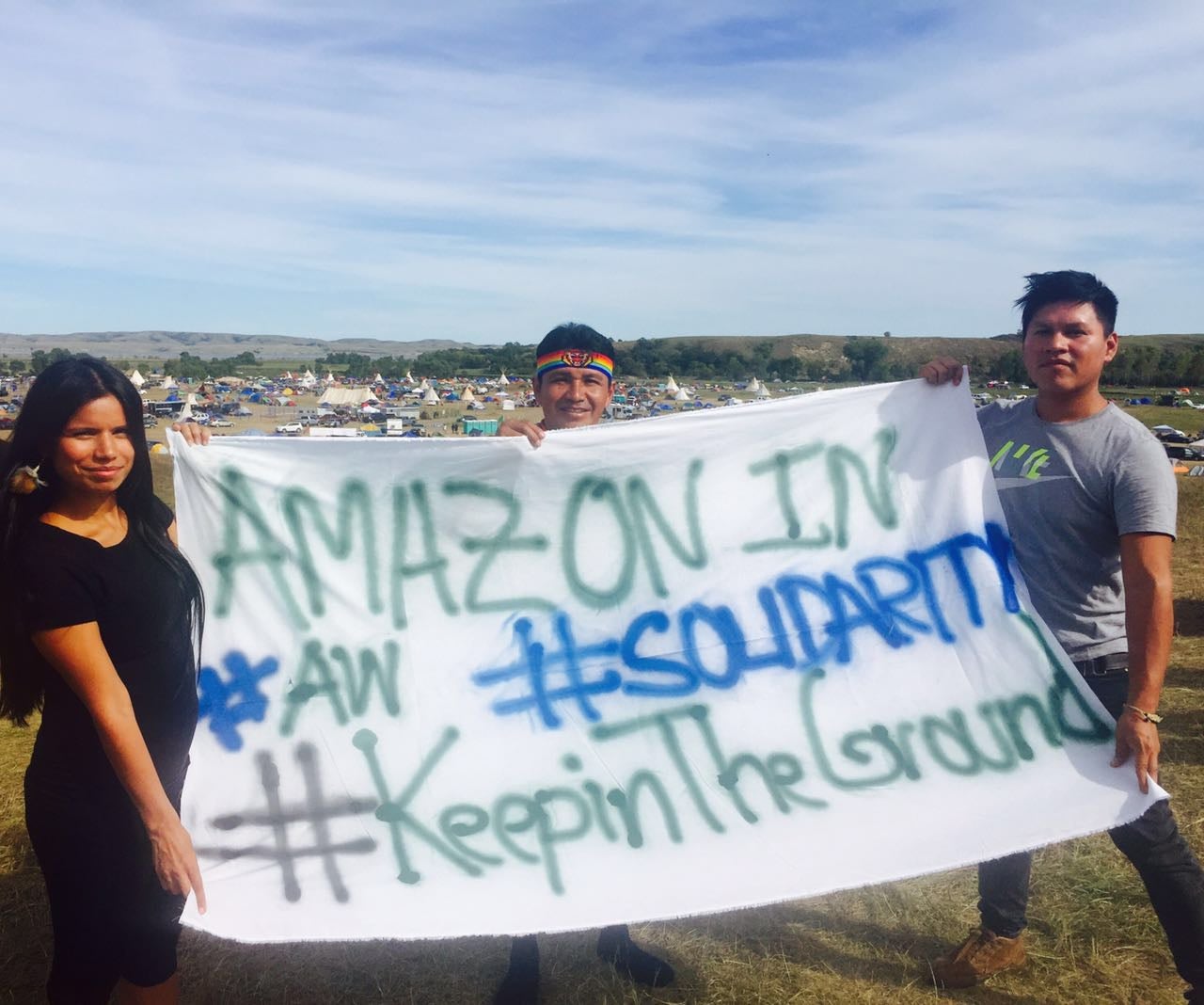 Two years after COP 21 in Paris, elected leaders around the globe have proven their unwillingness to take the bold, urgent action needed to respond to the climate chaos beginning to wreak havoc on the planet. At COP23 Indigenous peoples continue to actively advocate their positions largely outside of the formal meetings they have limited access to. The Kichwa delegation took part in a range of actions to deliver their message – the Climate March, the Rights of Nature Tribunal – and multiple press opportunities, highlighting their truly sustainable solutions for advancing climate justice.

Inside the negotiations, the Indigenous Peoples Forum on Climate Change (IIPFCC) – the Indigenous representative body focused directly on impacting the COP – realized what they consider a small victory in regards to the operalization of the Local Communities and Indigenous Peoples Platform created at COP21 in Paris. This Platform was designed to create a space where they can exchange lessons learned and share their unique perspectives on reducing emissions, adapting, and building resilience. During the course of the two weeks the Parties at COP23 debated how much decision-making power they could concede to these nonparty “stakeholders.” In the final decision, a shared chairmanship by state and local communities and Indigenous Peoples’ representatives was agreed to. While Indigenous Peoples clearly consider themselves rights holders (not stakeholders) in the UNFCCC negotiations the hope of the IIPFCC is that they - on the frontlines climate change - can increase their role in these intergovernmental talks and contribute to deciding their own future via mechanisms such as the Platform.

When Patricia Gualinga, a former Kichwa leader represented the global climate justice movement at the High-Level Segment at COP23 her impassioned speech contrasted sharply to those by heads of governments, reminding everyone that “Climate change is not a business.... We, the grassroots communities and Indigenous Peoples of the world, we have the real solutions. From the people of Sarayaku to Standing Rock, from the Ogoniland to Lancashire to the Ende Gelände movement here in Germany - we are all fighting against destruction and for a decent life. We are fighting for Climate Justice! ...Our struggle is for life, for justice, for Mother Earth. For women, youth, our children and their children. For our future!”

For the world to stay within the rise in temperatures per the Paris Climate Agreement, new fossil fuel production must be halted. Potential carbon emissions from the oil, gas, and coal present in the worlds currently operating fields and mines would take us beyond 1.5 or 2 degrees Celsius of warming as per that agreement.

"Considering that global climate chaos is here and global experts are warning that three-quarters of the world's fossil fuels must be kept in the ground to avoid catastrophic climate change, protecting the Amazon is a greater priority than ever. We stand with Indigenous peoples and allies to stop Amazon destruction, advance Indigenous solutions, and support climate justice," said Leila Salazar-López, Executive Director of Amazon Watch.

---Miriam Anne Frank as an independent consultant has worked on Indigenous issues for IPOs, NGOs, international organizations and foundations and teaches on these topics as a Lecturer at the Department of Cultural and Social Anthropology, University of Vienna. She has recently joined Amazon Watch as its Foundations Relations Manager.

Sarayaku Statement from COP23: Sarayaku Children of the People of Zenith Making Our Voices Heard at the United Nations Climate Summit COP23

We are from the sacred land where dreams and hopes never die.

We are carrying out a profound mission in favor of life. In every moment through our voices and actions, the voices of our people are also present inspired by the spirits of all the beings that inhabit our life space, our Living Forest territory.

We have come to this part of the world to share two fundamental principles of our people: One, the struggle launched by our elders and leaders in defense of our territory, and two, a proposal for life that comes from our philosophical worldview about the unique ways that life is reproduced. For us, to conserve the Living Forest (Kawsak Sacha) is to speak of the existence of all the beings, it is to guarantee the rights of nature and the rights of indigenous peoples. Our proposal is a contribution toward stopping climate change. As such, jointly with other indigenous peoples and world leaders we declare ourselves in defense of mother nature and all life. At the same time, we propose a new paradigm and vision for life, in response to a system that threatens life, that intends in different ways to perpetuate colonial law. We are referring to capitalism represented by the world’s governments which does little to look for solutions for the world and humanity and does much to destroy it. The desire is to become rich while impoverishing others. In the name of wealth they destroy human lives and the planet.

Confronting these facts we say that the earth is the origin of humanity, there is the seeds of life and liberty, as such we defend it so that it might grow. We cannot allow for the deceptions, the crimes and the injustices to be globalized. In the name of all the spirits of mother earth we would want our thoughts, our struggles for life, our hopes for existence be globalized through solidarity. The path for achieving common goals in defense of life is to bring together experiences, wisdoms, and good will, to return to the principles of life in which all beings are interconnected spiritually. We call these ways of being “nature”, she represents life and to her we are indebted. Therein one sees our conception of life, how we understand life and continuity thereof, it is the simple reason we defend it.

We are participating in various events during the COP, carrying out advocacy within the decisions that the governments take without direct participation of indigenous peoples. We have offered testimonies before the Rights of Nature Tribunal, expositions with local municipalities of Germany and Belgium, and with indigenous peoples of the north who have suffered similar experiences with oil exploitation and who continue in the struggle against an industry that violates their rights to water, sacred areas, and their life spaces.

As such, we demand that demand that responsible governments leave fossil fuels like oil in the ground and that they look for alternatives and concrete solutions in order to mitigate climate change, that they work with alternative renewable energies that don’t threaten the planet and the life of nature’s beings.

As children of the People of the Zenith, we are and we will be loyal to the principles of our people, wherever we go and until the final circumstances of our lives. We carry the principles of struggle and our love for life in our hearts, in our minds, and in our actions.