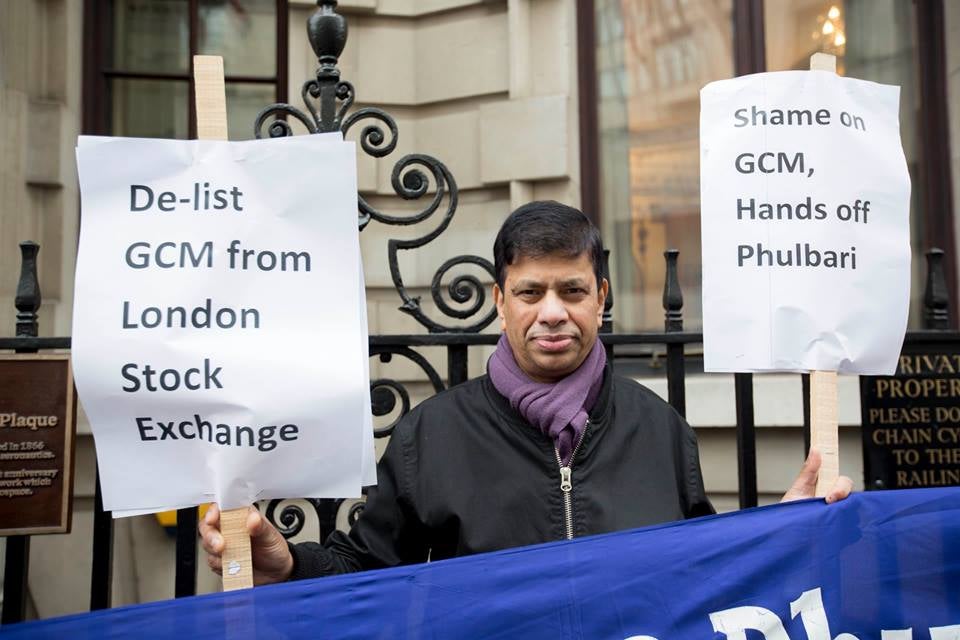 On Thursday, December 15, 2016, Bangladeshi protesters from the Phulbari region were joined by climate activists in London outside of the annual general shareholders meeting of Global Coal Management (GCM) Resources Plc, a British mining company who wants to build a massive open cast coal mine by forcibly displacing 130,000 people in Phulbari, Bangladesh.

Both outside and inside the shareholder’s meeting, anti-coal and human rights activists called to shut down GCM Resources.  The company does not have a valid license for business with Bangladesh, but continue to sell shares in London and committing abuse and human rights violations against Indigenous Peoples, farmers and local businessmen in Phulbari.   Protesters chanted “CGM, out out”, “Gary Lye, blood on your hands”; 2016 marked the tenth anniversary of Phulbari massacre,  in 26 August in 2006, when three people were shot dead and two hundred injured in a demonstration of 80,000 people for opposing plans by the company’s Bangladesh subsidiary, Asia Energy. Gary Lye is the current CEO of GCM Resources.  “The Bangladesh government withdrew the mining licence in the wake of GCM’s atrocity but the company continues its dodgy attempts to raise funds for the operation of a perilous project. CGM is selling shares in the name of the Phulbari project in London,” stated Akhter Sobhan Khan of Committee to Protect Resources of Bangladesh.

Using the strategy of shareholder advocacy, a delegation of dissidents was able to attend the shareholder’s meeting and powerfully interrogated the company directors who failed to show evidence of any valid licence for business.

Read London Mining Network's report from inside the shareholder's meeting.

The meeting was  poorly attended with  only 10 shareholders including the company PR and excluding the six dissident voices.  The meeting was quickly closed by the Chairman, Michael Tang, who was unable to answer any question from the floor.  Investment in GCM reached its lowest point ever in 2016, with stock prices dropping to $3.57 in April.

Seven UN human rights experts have called for an immediate halt to the project, on the grounds that it threatens the fundamental human rights of hundreds of thousands of people, including entire villages of Indigenous people, and poses "an immediate threat to safety and standards of living." Rumana Hashem of Phulbari Solidarity Group and an eye-witness to the killings in 2006 said:

The company’s CEO, Gary Lye, has been systematically abusing local opponents of the project. Earlier [in 2016] Lye has filed multiple arbitrary cases against 26 frontline local opponents, farmers, and small business entrepreneurs against mining in Phulbari and Dinajpur. This is incredible, and human rights abuse facing the innocent people and their families who never had anything to do with violence before this company inflicted violence in Phulbari.

Scientists have determined that extracting and burning the world’s remaining coal reserves would tip the scales towards irreversible climate change.  Coal is the world’s single biggest contributor to global warming. Whereas most of the developed world has abandoned coal, governments in poorer countries like India and Bangladesh are trying to squeeze out what they can out of the natural resources, despite damning effects on air contamination that have already made their cities among the most polluted and unlivable in the world: Delhi’s air is already three times more toxic than Beijing’s; Dhaka city’s air was measured to have the highest density of lead in the world.  Despite this, Bangladesh is also hoping to increase its coal production by 2030.

Read more: AFTER THE COP21: HOW BANGLADESH CAN MOVE PAST COAL AND WHY RICH COUNTRIES MUST HELP

Thursday’s picket event was co-organized by Phulbari Solidarity Group and the Committee to Protect Oil, Gas, Mineral Resources, Power and Ports in Bangladesh. Action outside and inside the AGM was joined by transnational activists from Foil Vedanta, London Mining Network, Coal Action Network, UK, Plane Stupid, Reclaim the Power, Socialist Party of England and Wales, and many Bangladeshi community protesters from Tower Hamlets and East London in the UK. Protesters say that they will not sleep until the company has closed its office in Dhaka and left Bangladesh.