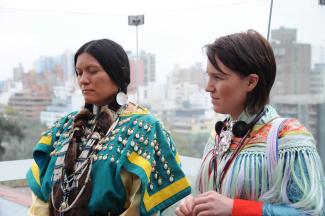 Indigenous youth face many issues when they decide to move to cities. Often they choose to move to urban areas seeking access to education or jobs, but many times it might not even be a choice. Dali Angel (Zapotec) from Mexico explains: “It’s not just the immigration issue that we are facing, or that young people want to move to cities. In Mexico, Indigenous youth are forced into cities because of the industrial activities happening on Indigenous Peoples’ own lands.” Angel spoke in depth about her government’s failure to support local economies, and how the type of labor that Indigenous youth are engaging in in their villages, such as traditional agriculture, is neither officially recognized nor subsidized. She also pointed out that when Indigenous youth arrive in cities they frequently become victims of discrimination and racism, which leads them to reject their own culture, language, and traditional dress. For example, one stereotype that ladino Mexicans hold about Indigenous people involves their use of modern technology. “If a non-Indigenous person sees an Indigenous youth using tablets or new technology, they’ll say that they are stepping out of their culture, that they shouldn’t have access to these new technologies if they want to maintain their culture,” Angel says. Yet, it is often true that Indigenous youth in Mexico might not speak Spanish and have limited access to new technology, making it hard to find jobs. Many times they even don’t have access to drinkable water, she adds.

In Peru, Indigenous groups are urging young people not to forget their heritage. Tania Pariona Tarqui is a Quechua from the region of Ayacucho, Peru. She says that young people have difficulty understanding how to link academic higher education and traditional knowledge; Tarqui, however, believes that she can complement her higher education with traditional knowledge. Andrea Landry, an Anishinaabe from Canada, shares the same kind of difficult experience of living between two worlds. She says she has stayed up nights thinking, “Why am I doing my master thesis in a western university when I even can’t speak my own language?”

Angel, Tarqui, and Landry all find that education is problematic. Some families cannot afford higher education for their kids. But it can also be true that elder people disagree with Indigenous youths’ choice to seek a western education. Tarqui says, “Usually there are two ways of thinking: some families agree that education is important, but with it there is a kind of sadness. They are afraid that children will lose connection to [their] homelands.”

Although the attitudes in local communities toward pursuing a western education can be negative, Landry advises young people to look for guidance at home. “Go talk to your elders and go to ceremonies,” she says, “because there you find people who have been fighting this fight for generations. And they know how to survive it. That’s the way I found my way on [the] right path.”

—Anne Aikio is Sami from Finland and was a participant at the World Conference of Indigneous Women.