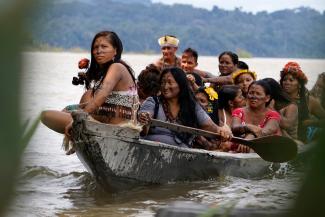 The sound of motors moves through the trees. Eleven heavy machines—all without license plates—cut down part of the Daje Kapap Eipi territory. This is the land of the Munduruku Peoples. They have occupied this land for more than three centuries, establishing a relationship of reciprocity with the forest. Now, illegal loggers stack chestnut trees onto trucks.

Munduruku leaders, working with the Pariri Indigenous Association, have walked over 100 kilometers in the Daje Kapap Eipi territory (also known as the Sawre Muybu Indigenous land) in Pará, Brazil. The territory is located in the southwest of Pará and is 440,280 acres in total. The Tapajós River to the west and the Jamanxim River to the east flow through the land. The territory also holds sacred sites, including where mankind is said to have been created in Munduruku tradition.

The Pariri Association was founded in 1988 to protect Munduruku rights. Created by Munduruku village chiefs, as well as guerreros and guerreras (warriors), the organization represents the Middle Rio Tapajós region. Their mission is to articulate the struggle for Indigenous rights and improve the quality of life in villages. To do this, the Pariri Association facilitates meetings for communities to reaffirm Munduruku values and discuss threats to their wellbeing. They also have developed sustainability projects and native language teaching programs in urban villages near the city of Itaituba for the past 15 years.

In 2014, the Pariri Association embarked on a new project to protect the Daje Kapap Eipi territory that was in danger from illegal loggers and miners. A number of hydroelectric projects and dams were, and continue to be, slated for the Daje Kapap Eipi territory as well. One project would dam the Tapajós River and its tributaries, flooding about seven percent of the territory, including the Itaituba II National Forest and the Boa Fé village.

Munduruku leaders met with the federal government and petitioned the National Indian Organization of Brazil to recognize and protect the ancestral lands of the Daje Kapap Eipi territory. When this did not happen, Munduruku protectors decided to do it themselves. Their project, called self-demarcation, establishes the borders of the territory and maps the land of the Munduruku Peoples. This allows for the land to be acknowledged as Munduruku land. By leading expeditions through the area, the Pariri Association strengthens surveillance and monitors intruders. So far, the Pariri Association has found several groups of illegal miners and loggers. These 11 heavy machines are just one horde of many. 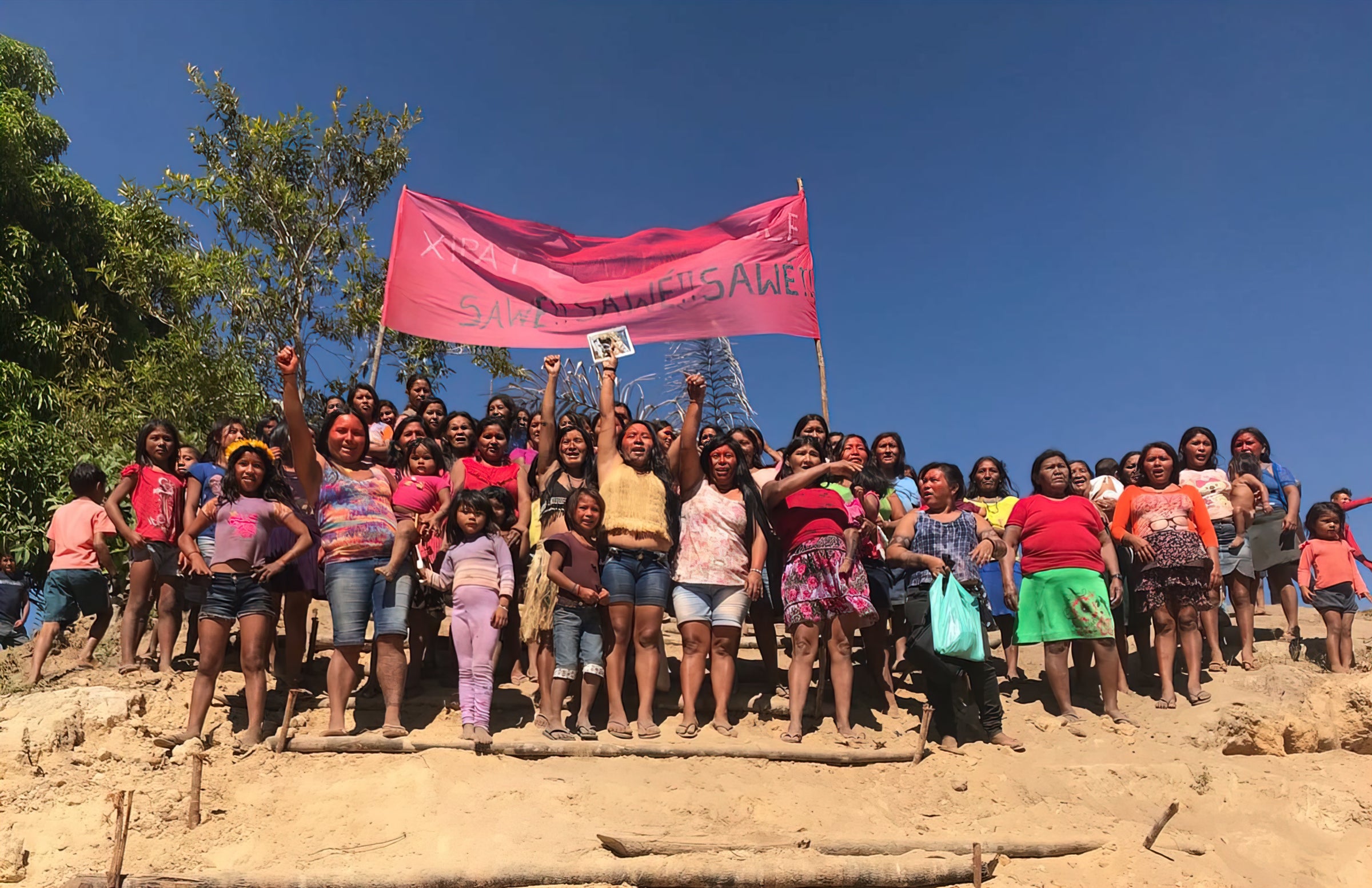 Gathering of Mundurku women in Patauazal village to discuss the threats and discrimination posed by dam, waterway, railway, port, mining, and logging projects on Munduruku lands.

“We were armed with our chants, our painting, our arrows, and the wisdom of our ancestors,” reads a statement from the Pariri Indigenous Association. The Association gives nonlicensed intruders three days to leave. When the expeditioners found these 11 heavy machines and trucks full of logs, they acted.

With such pressure from Munduruku protectors, the illegal loggers spent the whole night removing their equipment. Similar work, with successful results, has been done across the territory. Protectors also clean the land during expeditions. They open new roads and villages, such as Karoebak, located on the Jamanxim River. This village plays an important role in Munduruku stories about the creation of the fields on the black earth.

The management process is autonomous. All expeditions respect Munduruku norms, established from ancestors and recorded in stories. Shamans always accompany actions, asking for protection and advice in decision making. They request permission to enter the forests and open the roads. Protectors never forget to clean the peaks of the Sawre Muybu boundary. They ensure the physical and spiritual wellbeing of the land.

The call for ancestral territory recognition and sovereignty is nothing new to many Indigenous communities. Across the world, Indigenous communities historically and currently defend their land. The self-demarcation process is important because it demonstrates that the Daje Kapap Eipi territory is protected. It further acknowledges that Munduruku leaders have the right to monitor the area and remove illegal loggers and miners who exploit their resources.

The land is essential to the wellbeing of Munduruku communities, and the project recognizes the long history of the Munduruku Peoples in the area. On expeditions, the Pariri Association passes through sacred places, archaeological sites, and important symbols inscribed in physical features. The project protects holy sites like Daja Kapap as well, after which the territory was named.

Because of their work, the Munduruku struggle against the Brazilian government has become more visible in the media. The mainstream press is publishing articles and videos about the Munduruku protection of the land. Currently, the Pariri Association is in their fifth stage of self-demarcation. They have published open letters and statements online calling for recognition and making the lack of federal support for Munduruku communities globally known. Publications stress that this is a movement for all: not only does it protect human and Indigenous rights, but it protects the Brazilian Amazon as well. In a time of climate chaos, this is more necessary than ever.

In schools, leaders teach stories of the wise and old, while students learn how to use technologies such as GPS and cameras. Young people are understanding how to care for the Daje Kapap Eipi territory in days to come. The strength of the Munduruku Peoples has never faded, and future generations continue protecting the land. “That’s how our resistance has always been,” says the Pariri Association in an online statement. “As our ancestors always won battles and were never hit by enemy arrows, we also continued to clear our peaks, inspect, form watch groups, and open new villages.”

Not only does the Pariri Association protect the Daje Kapap Eipi territory, but their work strengthens a sense of belonging for all Indigenous Peoples who fight for the Amazon. Participants are Munduruku people from various villages and Indigenous people of other ethnic groups such as the Tupinambá. Many Munduruku participants had a chance to travel to the Daje Kapap Eipi territory for the first time in their lives. They come to know important parts of their traditional and sacred land. “Every time we do this activity we invite relatives to come and help us as well. This joint work, this union of ours, is very important,” says Sawre Muybu Village Chief, Juarez Saw Munduruku.

The projects of the Pariri Association continue to be essential for decolonization efforts in Brazil and worldwide. As their process of self-demarcation continues, Cultural Survival is honored to contribute to the efforts of the Pariri Association through the Keepers of the Earth Fund. Cultural Survival supports the organization in its mission to protect the Daje Kapap Eipi territory through its surveillance, selfdemarcation, and opening of new villages. We are honored to support them and we thank them for their work, which is a leading example for all Indigenous Peoples in the world facing similar situations.

Keepers of the Earth Fund (KOEF) is an Indigenous Led Fund within Cultural Survival designed to support Indigenous Peoples’ community development and advocacy projects. Since 2017, through small grants and technical assistance, KOEF has supported 175 projects in 35 countries totaling $763,172. KOEF provides, on average, $5,000 grants to grassroots Indigenous-led communities, organizations, and traditional governments to support their self-determined development projects based on their Indigenous values. Predicated on the United Nations Declaration on the Rights of Indigenous Peoples, Cultural Survival uses a rights-based approach in our grantmaking strategies to support grassroots Indigenous solutions through the equitable distribution of resources to Indigenous communities.