"We Put Down Our Weapons and Picked Up a Microphone” 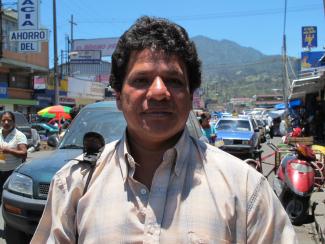 On July 7–8, 2012, members of 15 community radio stations partnering with Cultural Survival’s radio network across Guatemala gathered for a workshop in the Mujb’ab’l Yol training center in San Mateo, Quetzaltenango. The workshop focused on the difficult topic of historical memory of Guatemala’s 36-year armed conflict, which claimed the lives of 200,000 mostly Indigenous people. With the goal of using self-expression as a tool to alleviate trauma, participants wrote and recorded poems about the armed conflict in Spanish and their native Mayan languages.

Leading the workshop was Alberto “Tino” Recinos (Mam), Cultural Survival’s citizen participation coordinator, who ran the guerilla radio station Voz Popular during the armed conflict. Recinos founded a community radio station after the signing of the Peace Accords in 1996. The following excerpt has been adapted from a chapter of Recinos’ memoirs, a work in progress, as told to and translated by Amanda Turner. It describes Recinos’ introduction to radio as a tool for social change.

I was a guerilla in the Guatemalan Civil War for 12 years. I made uniforms. I transported weapons. I fought in the mountains. I taught incoming compañeros about our values and political motivations. Most importantly, I was a radio operator and part of the outreach for Voz Popular, the guerilla radio program.

I was 12 when the Guatemalan army kidnapped and killed my father for being a community organizer. My father had lobbied our community to build a school and a medical center. He had wanted to improve our quality of life and he was killed for it. I joined the guerilla movement when I was 14 because the army had killed my father, but also because I strongly believed in what the guerillas were fighting for. Were we communists? Were we socialists? You can call it whatever you want, but we were fighting for our rights and the rights of the Guatemalan people; we were fighting against inequality and abuses of Indigenous people. I believed in our struggle and I believed that fighting was the only way to make the Guatemalan government listen to us.

I fought in many battles and I saw many people die. But being a guerilla was like being in school. The commander asked me to teach fellow guerillas to read and write so that if they fell into the hands of the enemy, they could write their testimonies. I was a political instructor in the war. I explained to people why their conviction was important and that they should share their knowledge with other people so that everyone was equal. The war taught us how to be more human. The gun was for defending yourself, but the gun didn’t direct you. You had to direct yourself. The gun was just a tool to stay alive. These were beautiful things that we learned in the war.

After two years, I was given the great responsibility of being a radio operator. The first time I was given a radio, I had no idea how to use it. My lieutenant spent five minutes teaching me and told me to figure out the rest in the field. Because I didn’t really know how to use the radio, we were without communication for eight days. Luckily, my superior told the commander that we were without signal because we were in difficult terrain. But I had a good radio. Man, it was a really good radio.

Once I figured out how to use it, I communicated three times a day. We had to talk into the radio and say numbers, and then look up the numbers to understand the words. There were more than three pages of keys and I memorized most of them. I gained a reputation for being able to write really well through the radio. Sometimes there were 5,000 numbers in a conversation and headquarters would send me all those numbers and I would know all of them. I had a great capacity for hearing and memorizing the numbers.

If you missed one number, then you might not be able to understand the message. But I hardly ever had to ask people to repeat. I became second in command for the radios, imaginase (imagine that)! And I did the communications for some very important actions in the war. In 1986, I left the mountains. I was sent to Mexico because my family, who had been separated from me during the war, had finally been found. After reuniting with my family, I was recruited to work for Voz Popular, the guerilla radio station.

Voz Popular’s programs were made in a tiny studio in Mexico. My partner and I smuggled the programs and a radio with a huge antenna across the border into Guatemala so that the programs could cover the largest range. It was a very dangerous route and we could have been caught and killed at any moment. But we strongly believed in the importance of the radio programs. We were willing to risk our lives for this cause.

I worked for nine years transmitting the programs of Voz Popular. Then the war ended. In the Peace Accords, the guerilla leaders made sure to protect the rights of community radio. Indigenous people have a right to community radio and to protect themselves from massacres like those that happened in the past.

After the war, my compatriots and I founded Mujb’ab’l Yol (“Encounter of Expressions” in Mam). It is a coalition of community radio stations. We wanted to continue educating the people about their rights. We produce programs on women’s rights, rights of children, alcohol and drug prevention, the environment, religious freedom, and the importance of political participation. We do not allow any political parties to buy airtime; rather, any politician who wants a voice may use our airtime. The radio also serves as a space for community news. In villages where people can’t read newspapers or don’t have access to television, radio provides critical information.

To learn more about Cultural Survival’s Community Radio Program and to get involved, visit: www.cs.org/grp