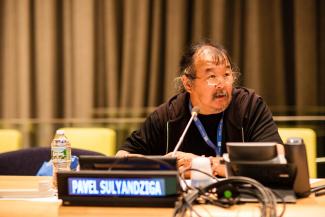 Pavel Sulyandziga (Udege), Member of the UN Working Group on the issue of human rights and transnational corporations and other business enterprises, Russian Federation

It was some kind of victory [adoption of the Declaration], it was the feeling of having achieved something, having finally conquered the mountain. But although it felt like a victory, we still feel like we are stagnating in a lot of issues.

My people used to be represented by eight groups; nowadays there are only four left, simply because they were taking away their lands. Within 30 years, four groups have simply disappeared. The Declaration is highly important, it is valuable. The Declaration is not our goal, it is simply an instrument to achieve our goal. The main goal is to protect the rights of Indigenous Peoples and their lands. Because everything else, the ways of life, the language, the culture, is bound to the land issue and land rights. This is why the Declaration on the Rights of Indigenous Peoples represents a very important instrument to achieve that. It is the main issue to regain access to our land and resources, then based on that, protect our language, our culture, and our right to self-determination.

In order to resolve the issues of Indigenous Peoples, we need two keys. One key is in the possession of Indigenous Peoples, and the second key is owned by the government. But of course in order to achieve our goals, both parties involved have to be using their keys, otherwise it will not be possible to make progress. This is why we all have to go the way towards each other, we cannot go halfway. Indigenous Peoples already in the middle of the process have to understand that by having rights you also have to assume responsibilities.

I think this is something that we understand; however, we are still expecting the government to fulfill their responsibilities today, and unfortunately today they are simply lying to us. A lot of measures have been taken like PR work and festivals, dancing... This does not really help us, it does not resolve the issue at all.

Although I am not a member of government, I still think that both sides of government have to be prepared to start a dialogue. You should also be ready to help yourself; even if you need help to have the issue resolved by somebody else, you as an individual or as a society have to be prepared to assume responsibility and help yourself as well. This is how we can achieve fruitful goals together.