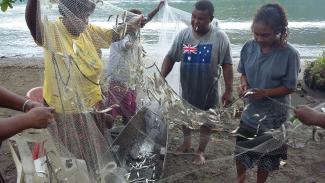 PRESERVING NATURAL RESOURCES OF THE AHETAHA PEOPLES IN THE SOLOMON ISLANDS

Honu e hinaania apa’apana ka ano ano nao kau,’ which roughly translates to, ‘The turtle trusts its flippers to crawl on sharp, dead corals,’ is an expression in our Are’Are language to describe despite how slowly one moves or how long the journey takes, one can reach their destination. Honu is the local name for turtle, hina’ania means believing and trusting, apa’apana means flippers, ano ano means creeping or crawling, nao means on or inside, and kau means dead coral on the beach. This expression is normally used when it comes to money, especially if someone is buying a live pig for a cultural obligation like the wedding of a relative with the highest price tag that no other relative can afford. The turtle is central to our culture and is often used in our language.

Since time immemorial, my Ahetaha people of Ahetaha,  in Manawai Harbor, Solomon Islands have identified footprints of family members and wildlife along the beach and in the bush along the bushtrack. We can easily tell who is who by the footprints. We live by the river, and we live by the sea. We are connected to these two environments in our daily activities. We use the fantail bird as our weather indicator. Whenever we see it building its nest along the river a meter above, we know that all our gardens along that river will not be under threat of flooding for the next six months. The fantail does the same along the coastlines where it builds its nest just a meter above the waves; then we know the sea will be fine for long period of time, and men will go fishing and diving and women will find seashells on the reefs.

In 2017, the Ahetaha peoples formed the Ahetaha Water Conservation Association (AWCA) in East Are’Are Constituency, Ward 19, Malaita Province, Solomon Islands to protect our ancestral homelands. Since government support is scarce, we have created sustainable practices for local flora, fauna, and water resources using traditional practices and methods that have sustained the ecosystems for generations. Currently, we are conserving the local dugong (a marine mammal similar to the manatee) and sea turtle populations, as well as managing seagrass. Sealife is often hunted for feasts or killed by accident by fisherman, and the Ahetaha are looking to save these creatures from extinction.

In East Are’Are, Ahetaha tribal members have seen their rich rainforest resources and terrestrial and freshwater species diminish over the last 20 years. We also face the challenge of an ever-increasing population, which has put significant pressure on the Tribe’s limited water, tropical rainforest, land, and mangrove forest resources. This has resulted in an unsustainable level of harvesting that sometimes causes family and tribal disputes. One of our chiefs was very vocal about establishing an organization to unify the whole Tribe for one common purpose. He first convinced a few relatives to protect the mangroves and reefs along the seafront of the small village of Ahetaha. Upon seeing that when they work together they can achieve more than they could have realized alone, the Conservation Association was born.

Ahetaha is a small hamlet situated on tribal land, consisting of eight households with eight kitchens made of sago palm thatch roofs, open walls, a fire area for cooking, and traditional ovens using black stones from the river. These households were scattered along the seafront and along the riverbank inland. Out of the eight households, fifty percent are permanently built houses, while the other fifty percent are made of semi-permanent and traditional materials. Today, about 500 people, including children, youth, men, and women are related to this land. Land is part of our DNA; we link to land through genealogy and lineage. Our relatives who are currently residing in the bigger villages nearby are optimistic in coming back to resettle their families in the land that we all connected to. We live on subsistence cultivation where we continue to plant our own native crops for family consumption, with a small cash economy to buy basic items like soap, clothes, sugar, salt, rice, and canned food.

There is a generation gap between us and our children in terms of learning. We learned through interaction with the natural environment, whereas our children now fail to connect to our natural world and instead are listening to music or absorbed with their phones. AWCA, a Keepers of the Earth Fund grant partner, is an agent of change for our community with an ambition to connect our people to our natural resources. In East Are’Are, Ahetaha tribal members had seen their rich potential in terms of rainforest resources and terrestrial and freshwater species. However, an unsustainable level of harvesting by an increasing population has caused family and tribal disputes.

Although the Ahetaha community has been going through a lot of changes in adopting a more Western lifestyle, our traditions remain part of us, like our traditions of governance, shifting cultivation, bridal dowry, mourning rituals, and the conservation method known in our dialect as Asiia. Today, many of our young generation working on this conservation program are qualified personnel such as marine scientists, environmentalists, environmental lawyers, electrical engineers, accountants, economists, agronomists, educators, architects, and business managers. We encourage our children to attain education and become specialists in areas of conservation already in place. Let us develop our own resources for a green economy; that is what we are working towards. We are of the view that we have the resources and wealth. All we need is to set our house in order.

There are limitations to the application of a marine protected area in East Are’Are in the context of customary ownership of land and resources and limited government capacity. There are a few formal protected areas, mostly established on customary land under tribal ownership, but with little management capacity. AWCA is working towards the conservation of dugong and green turtle recovery and seagrass management in East Are’Are because of uncontrolled killing for food, especially during cultural feasting. The current threats and challenges to the survival of the dugong are injury, and often death, when they are accidentally hit by boats, when fishermen are hunting them, or getting caught in fishing nets at night. There has been no past intervention or regulation prior to the start of AWCA.

AWCA has undertaken this marine protection project in addition to its prior standing effort to affect conservation on land. In their communities, Ahetaha people have taken a cultural approach to conservation by restricting use of certain areas like reefs and fishing grounds for periods of time to preserve them for a specific purpose, like feasting. The community is involved in identifying and mapping community resources and capacities for the conservation of species and natural resources. As a means to mitigate sea level rise in the area, AWCA is encouraging people related to the Ahetaha Tribe to plant mangrove trees at the river mouth and seafront. In 2016, the community chiefs established rules to safeguard designated areas from being exploited.

The project to preserve terrestrial and marine natural resources of the Ahetaha peoples, partially funded by the Keepers of the Earth Fund, will be realized through participatory approaches, including participatory learning and action tools appropriate for children, youth, women, and men, by motivating them to contribute to community-led conservation action plans. Conservation is nothing new in our culture. As an agent of change, Ahetaha wants to ensure that these resources are used by resource owners in a sustainable manner. With slow and steady progress, like the turtle, we will reach our goal.

Women preparing food for the closing of a 10-day mourning ceremony. Photo by Eddie Haikau Huitarau