We Have Gained More in Latin America 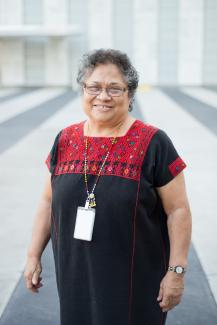 After 10 years, we have to recognize that in the cases where we have gained recognition as Indigenous Peoples with the right to self-determination, it has been much easier to advance the recognition of other rights. I think we have advanced, but at the same time we have to recognize that the adoption of the Declaration was in a very conflicted context at the international level; a context where neoliberal measures were taken in many countries where there is a model of economical development against Indigenous rights.

In Latin America, a majority of the countries have recognized Indigenous Peoples, and there are favorable legislations that recognize the rights of Indigenous Peoples. In Nicaragua, we have gained self-determination through the establishment of two autonomous regions in almost 50 percent of the Nicaraguan territory, where we exercise self-government through a multi-ethnic region. We have also gained land rights; over 30 percent of Nicaraguan territory has been recognized as Indigenous territories. In the case of Bolivia, the constitution recognizes the rights of the Indigenous Peoples as a nation.The coalition, or the composition, of different nations is the pattern of the Bolivian state. They have also established autonomy for different communities; they have established their first autonomous community through elections that are supervised by the national election body.

In the case of Colombia, Indigenous communities have also gained rights to self-govern health and education in their territories. We can find in Latin America some cases in which Indigenous Peoples have been able to gain self-governance recognition. In some cases there is an advance of pluralistic legal systems where Indigenous administrations are recognized.

We have gained more in Latin America compared to other regions, but things are not ensured because you may find in Latin America different tensions or conflicts between Indigenous Peoples and enterprises that have received concession from the governments to do mining and extraction in Indigenous territories.

If we look at it internationally, in the last decade it has been very important to see the political wins of Canada and Australia to adopt the Declaration. Initially, these two countries did not support the Declaration. So just the fact that they have recognized and adopted it has been an important step. In the case of Canada, we have seen a switch in the government’s position in the last year. They are beginning to discuss with Indigenous organizations to address problems they are facing. In the case of Australia, there has been political discourse to supporting Indigenous Peoples’ rights. Recently, there was a visit by the UN Special Rapporteur to Australia, and she was able to identify a lot of problems; for example, the high rate of incarceration of Indigenous Peoples in Australia.

In the case of Africa, we have seen very little movement in relation to Indigenous Peoples. However, I would like to highlight that in Congo there is a forestry act that recognizes Indigenous communities; the constitution of Kenya also recognizes marginalized communities including pastoralists and nomads; and there was also the adoption of ILO Convention 169 by Central African Republic in 2010. The African Commission on Human Rights have been very open to discuss the fact that in Africa there are Indigenous people, and they also support them. In the case of Asia, we are also seeing in some countries there having negotiations regarding Indigenous rights. In Nepal, in the Philippines, there has been some movement. There are more possibilities to open avenues for discussions between governments and Indigenous Peoples in different countries.