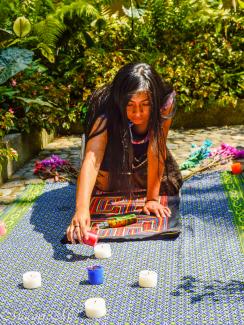 We, Guna, are binational Peoples with one community in Panama and two in Colombia, one in the countryside and the city. I live in the Guna Abya Yala region. I have lived in Medellín since I was 7 years old and I am now 26. I’m finishing my last semester studying audiovisual communication, and I am an audiovisual producer and cultural manager. My company, sentARTE, works to promote ethnic and gender diversity.

I had the opportunity to travel to Guatemala and there the LGBTQIA+ community calls itself queer, but in Colombia, queer is not used. Gay and lesbian is used here. There is a lot of racism, a lot of discrimination in Colombia. Gaytradi is used for gay; macheri is used for a lesbian. We do not have a specific word to address a transgender person. In our Guna spiritual tradition the gods sent a man and a woman, but then they sent a third person, who is a being without gender.

From the age of 12, I knew that my sexual preference was directed towards women. It was very difficult for me because in many Indigenous communities a lot of machismo is seen and women have to fulfill a specific role. It was hard at first because my preferences were not accepted. I had a partner when I turned 15 who helped me a lot, and that was when I decided to tell my parents about her. It was a very liberating day, but it was hard. My parents accepted me but it was also difficult for them. After discussing the matter with my family, I no longer cared what people thought. However, I am in the process of accepting myself discreetly to support my family.

Defining myself is a political act, and with it comes the desire to become an activist. This is not easy for a woman because cultural identity texts are imposed on us that contain so many gender oppressions. It will be a very long struggle, but I feel I have a mission to help other women, especially Indigenous women, whose roles are doubly oppressive. I have no problems identifying with the term LGBTQIA+. Above all things, I am a human being wanting to love another human being.

I have faced several obstacles. The first is belonging to an Indigenous culture where women occupy a specific place. Secondly, [I live in a] society that is closed to the idea of diversity. Colombia is a very closed country for these issues. We cannot yet adopt children.Transgender people are very visible and discriminated against in our villages. Many times they banish them, they throw them out of the villages. I know of positive experiences in Panama of trans being beloved and respected women in their towns. Here in Colombia I don’t know of these cases.

We need to educate society to be informed, because we are not “weird” people. We are equal. Myths that we are carriers of AIDS must be banished. Such education should start in school, with children. You have to instill this education to raise awareness in society. Gay men in Colombia are badly portrayed; less so the lesbian who has a false aura of being bisexual, typical of sexist fantasies. All this is very complicated in the street where we become more invisible. There are a couple of female artists, like Tatto, who, with their art, address these stereotypes.

My profession fits perfectly with the struggles of Indigenous Peoples. The fact that I live in the city, separated from the community, is looked down on, but I still go to community meetings led by caciques (chiefs). As an urban Indigenous person, I have encountered ignorance about Indigenous Peoples. My audiovisual company was created to safeguard and make Indigeous Peoples visible. I made a documentary for television that will be released in January, which talks about the feminine power in the community. My work contributes to the construction of a more equitable society. We contribute to the visibility of our Indigenous cultures and diversity in general.