We Are The Caretakers: The Next Chapter of Standing Rock 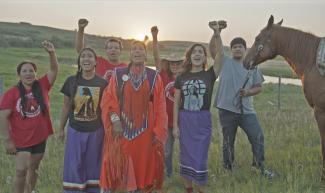 As the sun rose over the Missouri and CannonBall River, shining healing rays of light across the cold Northern Plains at Standing Rock, news that the United States Army Corps of Engineers had denied a permit for the construction of a key section of the Dakota Access Pipeline began to spread throughout Oceti Sakowin Camp. It was December 4, 2016. Tears of euphoria filled the air with prayers from the four directions as victory songs echoed across our camp. Mní Wičóni (Water Is Life) resonated symbolically and politically all over the world.

With great purpose and resilience, for more than eight months, Water Protectors, elders, and youth successfully stood on 1851 Treaty land in peaceful and spiritual resistance to the Dakota Access Pipeline. All the while, Energy Transfer Partners, TigerSwan, and the North Dakota Sheriff Department’s militarized campaign were escalating further environmental injustice and violence, trying unsuccessfully to provoke us into an armed confrontation.

Just five days into the Trump presidency, with the stroke of a pen, executive orders cleared the way for the $3.8 billion dollar Dakota Access and Keystone XL pipelines; a reversal of the Obama administration’s decision to halt construction of the Dakota Access Pipeline pending an Environmental Impact Assessment. Up to this point, our peaceful and spiritual resistance at Standing Rock, ignited by a small group of Lakota Youth, had grown into a historic gathering of over 500 Native Nations, along with thousands of friends, allies, and Water Protectors. Together we successfully challenged the encroachment of the Dakota Access Pipeline with prayer, grassroots organizing, and nonviolent direct action, backed with widespread support from all over the world.

Lawsuits filed by the Standing Rock, Cheyenne River, and Yankton Sioux Nations have also successfully challenged the legality of Energy Transfer Partners’ Dakota Access Pipeline proximity through 1851 Treaty land and its threat to health, livelihoods, and the environment, as well as the company’s failure to obtain Free, Prior and Informed Consent. After 11 months of peaceful and prayerful resistance to protect Indigenous rights and the life-giving waters of the CannonBall and Missouri Rivers, we were ordered to leave the camp.

Since the pipeline construction began in the summer of 2016, TigerSwan and North Dakota officials orchestrated efforts with police departments across 10 states to assist North Dakota’s Morton County Sheriff ’s department in an operation trying to crush our movement through the use of military-grade weapons and tactics. Their misinformation campaigns intended to brand Indigenous Peoples and our allies as violent eco-terrorists, and their extensive surveillance of our camps, individual Water Protectors and leaders, as well as numerous environmental organizations and social media platforms, violated their own laws and our rights.

On February 22, 2017, as we stood on sacred ground, a blanket of snow began to cover our camp like a prayer of protection. The night before we had gathered around the sacred fires of our camp. Elders and youth offered prayers and songs as we danced with our children in the spirit of our ancestors to the heartbeat of Mother Earth. Throughout that day and into the night I worked closely with the late Dennis Banks (Anishinaabe) and my fellow Water Protectors, transporting children and elders to safety as numerous militarized police forces closed in on our stronghold at Standing Rock.

Raids on Indigenous lands, territories, and camps and forced relocation comes with its own historic trauma. I heard police forces making comments such as, “After we raid your camp, we will make half-breed babies with your women.” A young Ojibwa sister and fellow Water Protector replied, “Not this time…not on our watch.” By the next night our teepees, sacred objects, and personal property were seized or destroyed. But they could never destroy our spirit. It is our spirit that has kept us alive for more than 500 years, and it is that same spirit that will keep us alive for the generations to come.

Many people believe that our resistance to the Dakota Access Pipeline died with the raid on our camps at Standing Rock. However, it’s important to understand that we are spiritual people following a prayer. We have survived genocide, colonization, and oppression. Standing Rock is a continuation of a long historic struggle for human rights, treaty rights, environmental justice, self-determination, and recognition; Standing Rock lives on in dozens of court cases, legal fronts, and in global divestment and Native rock music campaigns.

Among the many roads to decolonization and freedom that emerged from our camp is the #DefundDAPL campaign, which takes direct action against the pipeline’s financial backers and the banks and cities who held investments in the Dakota Access and other pipeline projects. Standing Rock Water Protectors have led the largest divestment movement in history and have succeeded in engaging with city councils across the United States to divest over $4 billion in pipeline investments, with Seattle and the California cities of Davis and Santa Monica leading the way. The #DefundDAPL movement has also persuaded thousands of individuals who have divested from Wells Fargo, Citibank, and other institutions who remain tied to pipeline projects. In Europe, the campaign has persuaded some of the largest banks, such as the Dutch giant ING, Norway’s pension fund (who were lobbied by the Sami), and the French Bank BNP Paribas SA to divest.

In June 2017, a federal judge ruled in favor of the Standing Rock Sioux Tribe in a 91-page decision that determined the Unites States Army Corps’ prior study of the Dakota Access Pipeline was deficient because it failed to fully study or consider the potential impacts of oil spills at Lake Oahe and the Missouri River, or how spills could harm fish and game, which tribal members depend on for subsistence. The ruling is a major victory because it recognizes Standing Rock Sioux’s fishing and hunting rights and upholds U.S. federal law, which mandates that large projects that impact Native Peoples and other marginalized groups must be evaluated on environmental justice grounds. This decision, and the many more that will soon follow, will help us broaden grounds for legal claims beyond the basis of sufficient consultation.

In October 2017, federal judges ruled against lawsuits initiated by Energy Transfer Partners by the Kasowitz firm, attorneys closely tied to President Trump and his corporate enterprises. The lawsuits targeted Greenpeace USA, Greenpeace International, and other environmental groups in an effort to silence free speech and advocacy. Energy Transfer Partners and other mining and logging companies are using Strategic Lawsuits against Public Participation in a clear pattern of corporate intimidation and harassment, targeting Water Protectors and environmental activist groups in an effort to shut us down through expensive litigation proceedings. According to EarthJustice, key decisions about the Standing Rock lawsuits are still unsettled, specifically questions about the ability to shut down the pipeline on the Standing Rock Sioux’s case, and whether the Standing Rock Sioux can demand better oil spill planning and other pipeline compliance issues. The Army Corps will complete their Environmental Impact Assessment in April 2018.

In support of the continuation of my work with Banks, the United Nations, and Standing Rock, I’m continuing to organize personal projects, including the “Born on the Rez” Native rock music movement, a poetic journey through history about how we as a people got to Standing Rock and our fight for cultural survival in the 21st Century. “Born on the Rez” supports two primary objectives born out of our stand at Standing Rock: #Honor1851Treaty Campaign, and the Mní Wičóni Legal Defense/Offense Committee.

#Honor1851Treaty is designed to generate support and educate the public with Native fashion and style through social media and other online platforms, public rallies, events, and concerts about various violations of United States laws, beginning with The Fort Laramie Treaty of 1851 and numerous national and international human rights, civil rights, and environmental laws broken at Standing Rock. Mní Wičóni Legal Defense/Offense Committee is an organization formerly co-led by Banks, and under the continued leadership of Madonna Thunder Hawk (Cheyenne River Sioux), Phyllis Young (Standing Rock Sioux), and myself. Its mission is to support and defend Water Protectors on the frontlines of the movement who have been arrested, violated, disenfranchised, marginalized, and displaced.

With a global petition to generate over a million signatures, the campaign challenges the United States Congress to #RightTheWrong of at least one of the more than 500 treaties made with Native Nations. In loving memory of Banks and his wishes, on the 50th Anniversary of the Trail of Broken Treaties (September 2022), the campaign will commence a cross-country caravan from the west coast of Turtle Island (North America) to Washington, D.C. with #PeoplesPower.

We must remain vigilant as the Trump administration continues its assault on Indigenous Peoples and the environment through deregulation and other measures that defend corporate interests for bottomline profits for the less than 1%. However, my sisters and brothers, we shall not despair or grow weary. Our movement is indomitable. Our voice is global. Eventually world leaders and their representatives will see the wisdom in honoring the rights of Indigenous Peoples and the rights of Mother Earth. They will come to join us in safeguarding and protecting our Treaty lands and territories and the world’s last remaining wild places from environmental genocide. For we are the caretakers, we are the wisdomkeepers, we are of Mother Earth. We are Indigenous.