A Way of Life More Precious Than Oil: THE WAORANI OF ECUADOR Win A HISTORIC LAWSUIT IN DEFENSE OF THE AMAZON 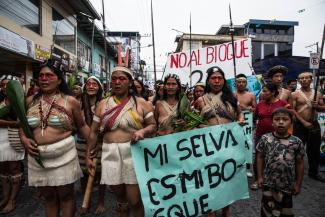 The Waorani people are legendary hunter-harvesters of the southcentral Ecuadorian Amazon. As of this summer, they must also be described as pioneers in the Indigenous struggle to protect and preserve the Amazon and the global climate. In response to the State’s plan to auction 500,000 acres of their ancestral forests to foreign oil companies, the Waraoni developed a multi-front campaign that culminated in taking the government to court—and winning. The judicial system sided with Waorani claims that their constitutional rights to informed consent had been violated. The decision effectively blocked the despoilment of a key biological corridor in the wider region, and kept an enormous amount of carbon out of the atmosphere.

The Waorani legal victory was no bolt from the blue; it was the culmination of several years of innovative and tireless organizing and outreach. The Waorani developed a multipronged model that combined community mapping, legal efforts, and alliance-building. At its core was a creative approach to “winning the narrative” through the deployment of storytelling and other tactics that illustrated their way of life to be more precious than oil and greed. One of the ways they did this was through a territorial mapping project that combined the use of traditional knowledge and modern technology to map out 180,000 hectares (approximately 700 square miles) of their ancestral territory in a way that showed the world what would otherwise go unseen. In telling their story, they brought together and involved 16 Waorani communities along the Curaray River, as well as other Indigenous Peoples from across Ecuador. 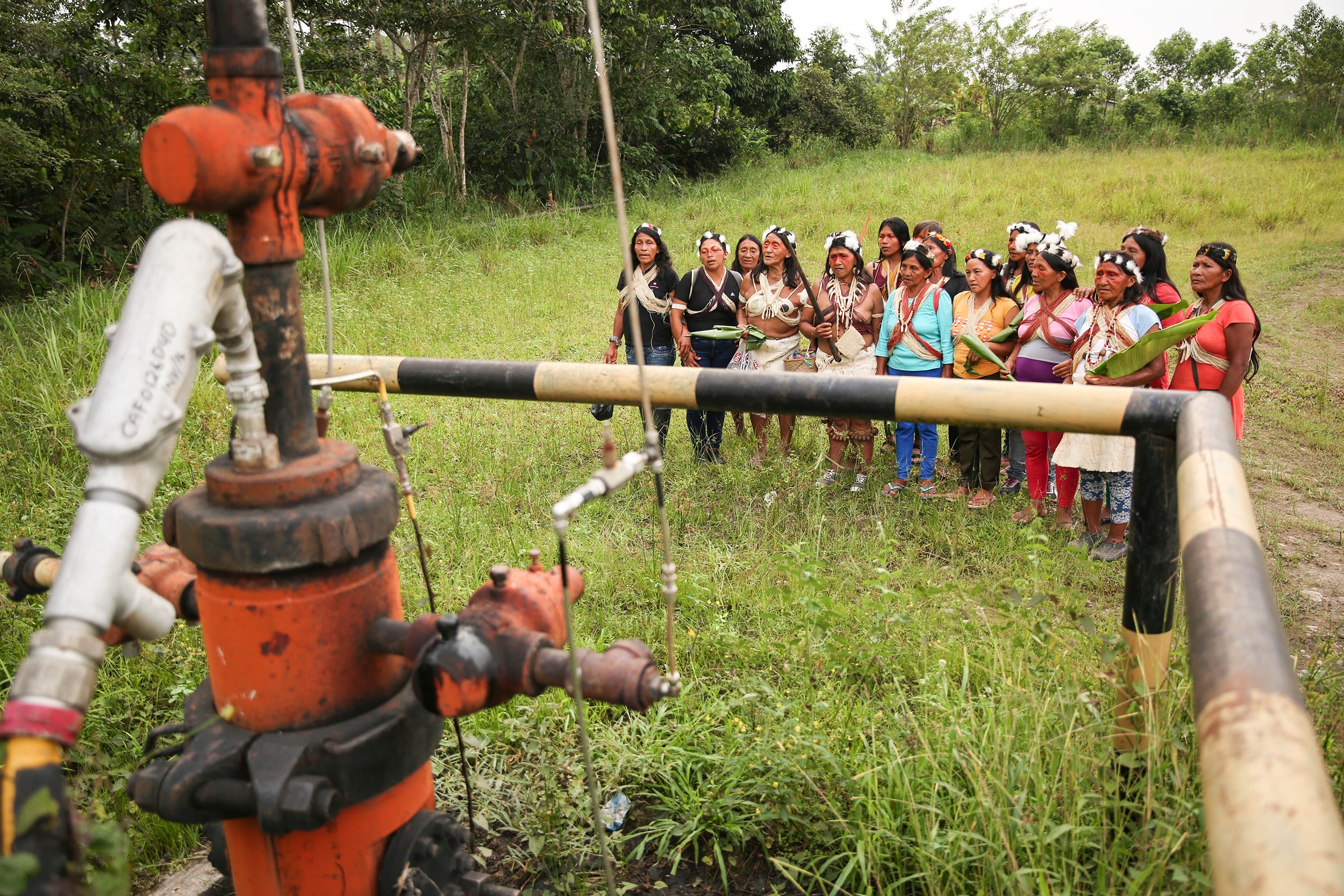 Waorani women sing a song of resistance at an oil well in Ecuador’s northern Amazon: “We will not let
you into our lands.”

“The government’s map only shows oil blocks, it looks empty. This is the government’s view of the Amazon. But our forest homeland is not an oil block. We have created our map to show that our territory is full of life,” said Oswando Nenquimo, a Waorani leader. “Our maps are an extremely important tool and catalyzed a great unity amongst our communities,” affirmed Nemonte Nenquimo, Waorani leader and lead plaintiff for the case. “The maps show what we have in our communities and our land; they are important for the future generations. But they also show the world what our forest means to us and everything we are fighting to protect.”

Notably, the Waoranis’ struggle involved three generations of women at the forefront, fighting to protect their culture, territories, and sources of food and fresh water. Dozens of Waorani women participated in the court proceedings, arriving with traditional palm-woven baskets, clay pots, and food grown in Waorani gardens. When the women felt they were being disrespected by court and government officials, they broke out into spontaneous song, further capturing the imagination of the world with their spirit, conviction, and courage.

“We sing the songs of our ancestors. They defended our territory for thousands of years, and today we continue this fight,” said Omanca Enquiri, Waorani elder. “This victory is a dream come true. It means that our future generations can continue to live freely in a healthy and pristine forest, with clean water and pure air. It is the legacy for my grandchildren.This belongs to them!” 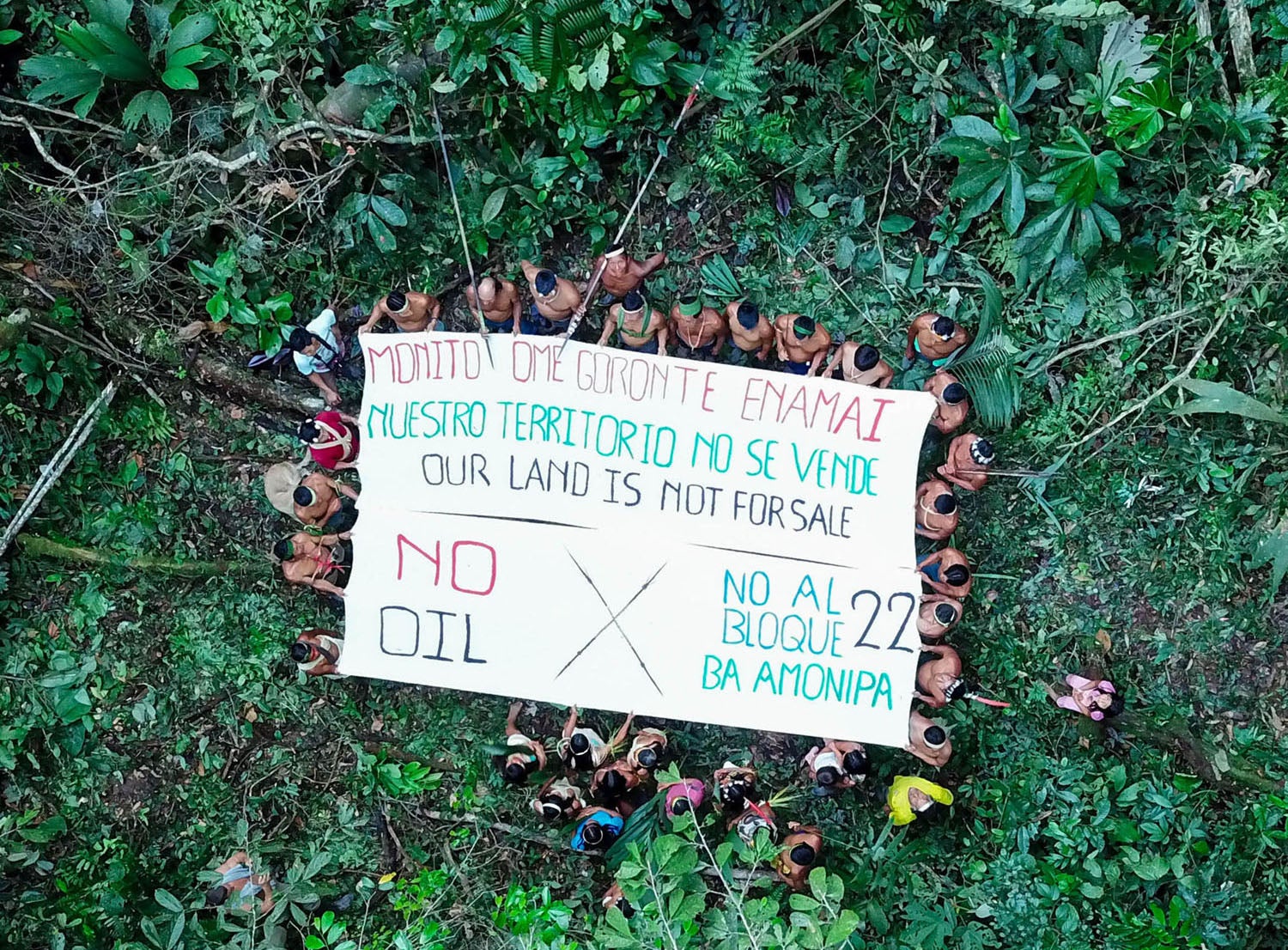 The Waorani send a message to the world that their land is not for sale.

The recent victory is bittersweet, following decades of tragedy. When the Waorani were contacted and forcibly settled by the State and American evangelical missionaries in the 1960s, they had been living for centuries in harmony with their rainforest home. They had developed a rich culture marked by high craftsmanship and artistry, profound spirituality, and a sophisticated understanding of the natural world’s complex, interconnected systems of plant and animal life. But since first contact, the Waorani way of life has come under enormous strain. Decades of reckless oil production has left a tragic legacy in and around Waorani land for the natural environment and human health. It has also caused severe cultural disruption.

When Indigenous people fight to defend and enforce their rights, they are protecting their future and ours. The fate of the global climate hinges on saving the Amazon rainforests, which, after the oceans, are the world’s most important carbon sinks. As its traditional inhabitants and historical defenders, Indigenous communities are essential to any effective climate mitigation strategy, and represent a powerful buffer against the destruction of an ecosystem that regulates our planet’s cycles of oxygen, carbon, and freshwater. 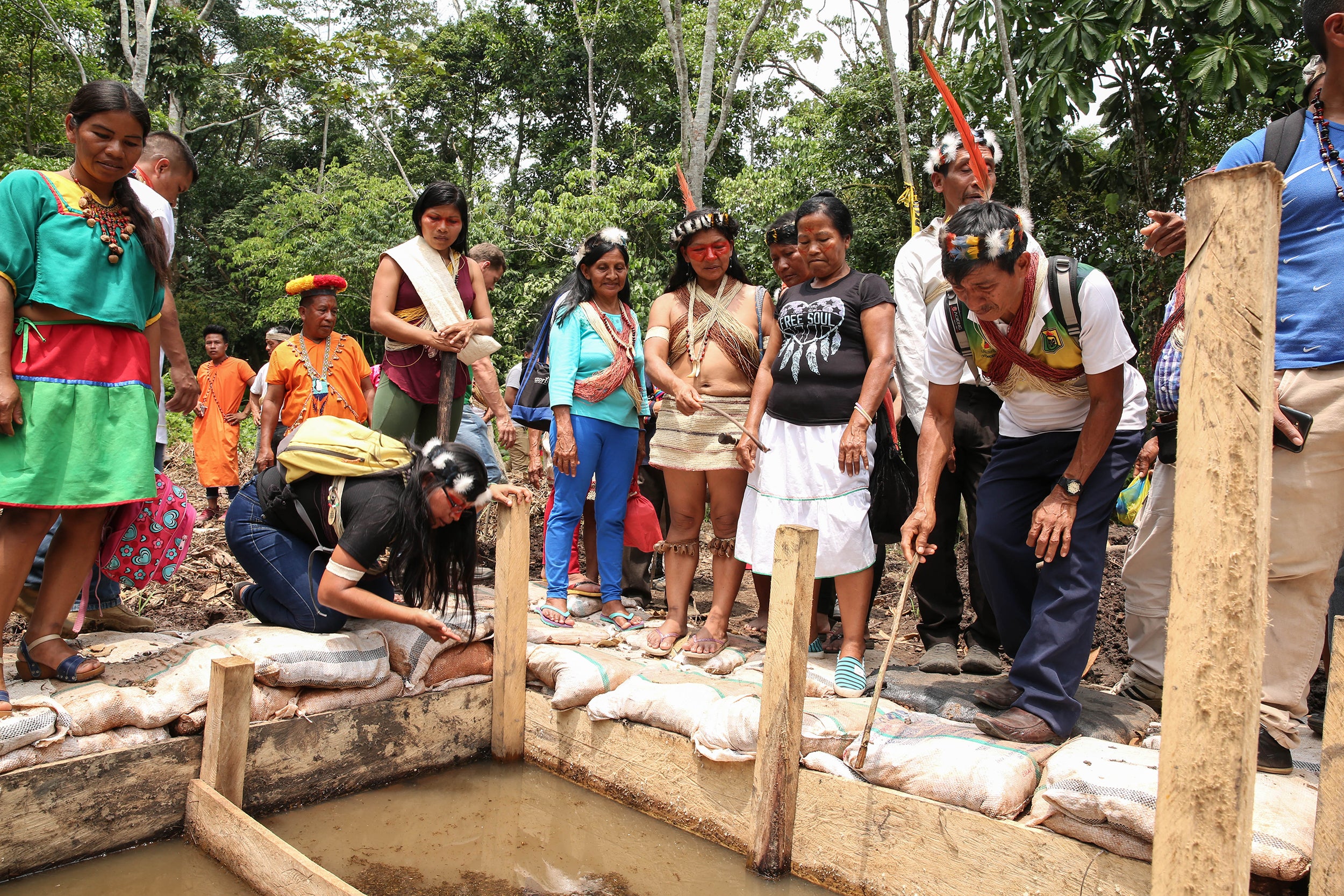 Members of the Siona, Secoya, and Kofan Peoples of Ecuador’s northern Amazon show members of the Waorani Nation the impacts of an oil spill in their ancestral territory.

Although the Waorani have won an important first battle, the struggle is ongoing. The Ecuadorian government still seeks to auction 7,000,000 acres in the country’s central rainforest to oil companies. The battles to come will involve the other nine major Indigenous nations of the Ecuador’s Amazon. Many of these joined the Waorani in solidarity outside the courtroom last month, traveling from distant villages in the country’s north and south. They marched with the Waorani in the streets; they submitted amicus briefs; and they returned to their communities to share what they had learned and to organize for the future. Scaling up this model of alliance-building and mobilization will be crucial to defeating the development agenda that threatens Ecuador and the entire Amazonian region. The Waorani victory is a powerful and hopeful demonstration of what is possible.

— Mitch Anderson is the executive director of Amazon Frontlines, an NGO in Lago Agrio, Ecuador.