Skip to main content
41-1 Keep It in the Ground

Water is Life: The Rise of the Mní Wičóni Movement 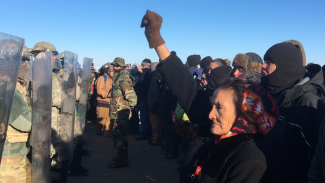 One year ago in February, our families on Standing Rock started organizing with urgency and a new community action collective, Chante Tin’sa Kinanzi Po (People, Stand with a Strong Heart), emerged. The Dakota Access Pipeline was coming, despite more than two years of objections raised directly to the company, Energy Transfer Partners, and years of successive Standing Rock Sioux Tribal Council resolutions passed in opposition to pipeline construction within the boundaries of our treaty lands. For millennia, innumerable generations of our ancestors have been born along our rivers and the delicate network of watersheds veining the vast prairie expanses of our homelands. Standing Rock spans the North and South Dakota border, and is bounded by rivers—the Cannonball on the north, the Missouri on the east, and is bisected by the Grand River, the birth and resting place of Sitting Bull.

In the midst of last winter’s subzero temperatures, young people throughout Standing Rock’s eight districts arrived at the realization that the federal and Tribal bureaucracies and court systems would likely do nothing to stop pipeline construction from occurring directly underneath Standing Rock’s primary drinking water source, Mni Sose, the Missouri River. This once swirling and unpredictable presence, is now swollen into a sprawling reservoir called Lake Oahe, spanning hundreds of miles between the capital cities of Pierre and Bismarck. A movement grounded in direct action, prayer, and ceremony was born.

The young people of Standing Rock, Cheyenne River, and our sister Tribes among the Oceti Sakowin (Seven Council Fires), or Great Sioux Nation, began raising awareness in March 2016 about the imminent threat to so many communities’ drinking water. They were mentored by a group of young parents and community leaders like Honorata Defender, Jonathan Edwards, Waniya Locke, and others, resulting in “Run for Your Life,” Standing Rock’s first public anti-pipeline prayer event. Later, the Four Directions Walk, Run, March, and Ride was organized when the Army Corps of Engineers scheduled listening sessions on Standing Rock and a Tribal radio station volunteer showed up with his new drone to capture footage as the participants converged on the Grand River Casino at the confluence of the Grand and Missouri Rivers. “Never again,” they vowed. “Water is life. Mní Wičóni. This is all we have left—our river, and the lands you didn’t take last time.”

Certain that the Army Corps would continue to ignore their pleas to protect the drinking water needed for all the Sioux reservations’ communities (and agricultural production by Native and non-Native farmers and ranchers alike), Tribal youth, grassroots, and elected leaders launched a community horseback ride from the Standing Rock Tribal headquarters in Fort Yates, ND, on April 1, to the tiny community of Cannon Ball, ND, which overlooks a beautiful meandering floodplain.

Following the long ride, a few Cheyenne River citizens fresh out of the Keystone XL pipeline prayer camp pitched their tipis and never left. The encampment was named Sacred Stone, after the original Dakota name of the Cannonball River, where its whirling confluence with the Missouri tumbled boulders into perfect spheres revered in ceremonies for millennia by a half dozen Tribes of the northern plains who utilized portions of the area for village encampments, ceremonial spaces, and burial grounds.

Driven to do still more to bring the region’s attention to the prospective pipeline’s potential for destruction, a handful of youth found allies in some of Standing Rock’s local district governments and were soon successful in lobbying the Tribal Council to earmark funds to help them share their story online through video diaries and a new website, RezpectOurWater.com, to house their Change.org petition to the Army Corps. The young people got to work recording their love letters to the river, sharing them via social media, and decided a few weeks later to set out on foot to deliver their petition signatures directly to the Army Corps Region 8 Headquarters in Omaha, NE.

Though every community event to that point had begun in prayer and had been led by family eagle staffs belonging to traditional headsmen and spiritual leaders, not all in the Sacred Stone Camp and the local districts were uniformly in support of such an ambitious youth effort that would take attention and resources away from the new prayer encampment. But the 22-year-old mother, Bobbi Jean Three Legs from Wakpala, who organized the “Run for Your Life” in March, found unqualified support from Defender, Edwards, and Locke. An uncle from the Taken Alive family held a blanket dance at a small local powwow, yielding a couple hundred dollars for the 700-mile journey south. “Just go. Let the people know what’s happening, and they’ll join you. They’ll come to support us,” she recalls Edwards reassuring her.

Just before they reached McLaughlin in Standing Rock’s Bear Soldier District, Three Legs recalls three horses galloping across a field to the fence line to jog along side them. She heard the sudden deafening crash of thunder, and “I knew the ancestors were with us. I knew we could do it.”

In late July, the youth set off for Washington, D.C. armed with tens of thousands more signatures to rally at the national Army Corps Headquarters and the White House. When they returned home to Standing Rock in late August, they joined a movement transformed: a standoff along ND Highway 1806 as dozens of armed state and county law enforcement officers protected Dakota Access pipeline survey crews who had begun their destructive work. But the runners and citizens of Standing Rock were supported by hundreds, then thousands, of campers who had overfilled the space available in Sacred Stone and taken up residence north of the Cannonball River on treaty land claimed by the Army Corps of Engineers. The seemingly impossible odds of teens and families on foot and horseback facing down a billion dollar industry with nothing more than prayer flags and sacred pipes also caught the attention of young Hollywood, and stars like Shailene Woodley and the cast of The Avengers amplified daily #rezpectourwater, #nodapl, and #mniwiconi #waterislife posts across social media platforms. Suddenly #standingrock was trending.

Indigenous Peoples and Tribal delegations from across North and South America flocked to the encampments, which swelled into three main areas along the Cannonball and Missouri Rivers: Sacred Stone, Oceti Sakowin, and Rosebud. Everyone had a story to share of struggles to protect precious homelands and waters from aggressive extractive industries. Songs and stories in dozens of languages hummed late into the summer, then fall, nights. Winter loomed, and the camps were abuzz in cold-weather preparations, all while the movement evolved into dramatic daily direct actions with unarmed prayer marchers facing down an increasingly militarized police presence alongside armed pipeline security forces.

Mass arrest events mounted, drawing hundreds into a thicket of legal charges that quickly escalated from misdemeanors to felonies. More than 700 now face criminal penalties and jail time in North Dakota’s well-funded petro-state justice system, awash in oil and fracking industry lobbying contributions and tax revenues. The Standing Rock youth’s RezpectOurWater Change.org petition has since garnered 730,000 signatures. Not a single arrestee has yet been charged with possession of a weapon.

As the Dakota Access pipeline has returned to drilling, the prayer camps are on the move uphill out of the Cannonball and Missouri River spring flood zones. Spirits are unbroken, but tempered with grief and rage at the ongoing injustice of $33 million in state law enforcement costs arrayed against families and teens who only want to ensure clean water for present and future generations. Spring is coming soon, but unusually, the Wakinyan (Thunder Beings) have kept watch all winter, appearing during the throes of the worst of the December blizzards. Along the frozen rivers, under the ever-brighter lights of construction crews, military veterans are arriving. Together with the youth and allies of Standing Rock and Cheyenne River, they keep vigil and remind one another: Chante Tin’sa Kinanzi Po!

Photo: During the winter months it has been intense and emotional, as the militarized police force aggressively moved into encampments at Standing Rock. Photo by Robby Romero.