A Voyage Around the World—In a Canoe 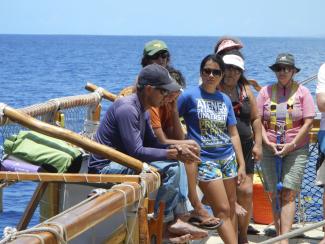 Would you believe that the Hawaiian voyaging movement began as a scientific and social experiment? In 1973, an anthropologist named Ben Finney, Hawaiian artist Herb Kawainui Kāne, and sailor/surfer/waterman Tommy Holmes formed the Polynesian Voyaging Society. Their first task was to build a replica of a Hawaiian deep-sea voyaging canoe, as one had not sailed the Hawaiian waters in over 600 years.

The canoe was built to prove that the Hawaiian people of old could purposefully navigate the open ocean between Hawai’i and the islands of the south as documented in our traditions of storytelling and chants, and also to prove that our ancestors did not populate these Polynesian islands by accident as asserted by Western researchers. However, for the Native Hawaiians that dove headfirst into building this canoe and preparing for this voyage, this was no mere experiment: this was bringing back a tradition; this was a source of pride for all of Hawai’i.

On the 8th of March 1975, the double hull voyaging canoe Hōkūle’a was born. She was launched and dedicated at Hakipu’u on the island of O’ahu. She is 62 feet long and 20 feet wide, and can hold a crew of 12–14 voyagers. Hōkūle’a was built for just one round trip voyage to Tahiti and back; the return to Hawai’i was to mark the end of the experiment and the end of her voyaging. However, on March 8, 1975 a canoe was not merely launched—a living force was born. The return to Hawai’i from Tahiti would prove not to be the end of her voyaging, but just the beginning.

Indeed, Hōkūle’a continued to voyage, becoming a symbol of hope and pride for the Hawaiian people. From that first voyage until today, Hōkūle’a has sailed over 130,000 nautical miles. She has reopened the voyaging pathways of the Polynesian triangle of Hawai’i in the north; Aotearoa in the southwest; and Rapa Nui in the southeast, as well as the routes to the islands in between. Northern corners of the Pacific have also been sailed, from North America through Alaska in the east to Japan in the west. Hōkūle’a has also sailed to honor our ancestors in the islands to our northwest, to Nihoa, Mokumanamana, and the rest of the northwest Hawaiian Islands. She has paid homage to our master teacher and father, Pius “Papa Mau” Piailug, on his home island of Satawal in Micronesia.

The Pacific has been sailed, and is once again familiar. In 2007, after Hōkūle’a returned from her voyage to Japan, the leaders of the ’Ohana Wa’a, a leadership consortium of the Hawaiian voyaging families established in 2006, met to start the planning of an epic voyage, one longer and more dangerous, like none other yet undertaken: a World Wide Voyage.
This voyage would cover 47,000 miles and visit 85 ports in 26 countries, requiring 300 crewmembers for the various legs, representing Hawai’i and 16 other nations.

For such a long voyage, much preparation is needed. Hōkūle’a was drydocked and rebuilt from bare hulls to give her more strength and room to be well equipped for entering foreign seas. This is a voyage long in time as well as in distance, scheduled to take a total of three years to complete, as sailing will only be done during the hurricane-free windows of the various oceans. As such, it requires well-trained and experienced crewmembers. In order to ready so many crew members, the crew training has been intensified and many training sails have been undertaken into the deep ocean for the crew members to become familiar with Hōkūle’a’s improvements.

This epic voyage is not being undertaken simply to prove that it can be done, but rather to engage in some critical dialogue with those around the world. As a people of the ocean, we Hawaiians understand our direct connection as humans to the health of the land and the sea. As voyagers, we consider our canoe to be our island, and the islands our canoes. And for our canoe to live and thrive, we need to take care of each other, take care of our canoe, and take care of our ocean. It behooves us all to take care of this island that we all share, this island we call Earth. So in this voyage around our island Earth, we will share the lessons we have learned of sustainability and accountability, and learn from others who steward their land and sea, especially those of the First Nations peoples who have an intimate knowledge of their environment spanning centuries. Together, as inhabitants of island Earth, we can build the path to a sustainable future.

The year 2013 marked the first leg of the World Wide Voyage, consisting of a voyage around our island chain entitled Mālama Hawai’i, or “To Care for Hawai’i.” It is our tradition to visit our family before embarking on a long journey; we do so to gather up the love, strength, and support of our families, our foundation. And upon our return, our voyage will not be complete until we again sail throughout our islands, this time to share the knowledge and aloha that we gained from the rest of the world.

This short article is meant to entice you, reader, to follow our voyage in future issues of the Cultural Survival Quarterly over the next three years. We will continue to bring updates of the voyage, the people we meet, and the things we have learned. We will give you deeper insight into our voyaging and navigation traditions, and will profile the voyaging ’Ohana in Hawai’i
and throughout the Pacific. So come, lift the sails, and let us take this journey together.