Violence Against Women Must End, In Profile: Andrea Landry, Anishinaabe from Canada 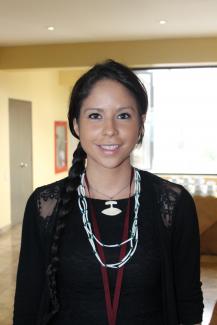 Andrea Landry, who is also known by her Indigenous name, Migizi Odey Kwe (meaning Eagle Heart Woman) comes from Pays Plat First Nation in Ontario, Canada part of the Anishinaabe (Ojibway) people. She is part of the Global Indigenous Youth Caucus for UN Permanent Forum on Indigenous Issues and has been involved in the preparatory process for the World Conference for Indigenous Peoples, as well as various other UN systems. Landry is young in years, but her age belies her experience.

At the World Conference of Indigenous Women in Lima, Peru, Landry spoke about colonial versus Indigenous ideologies regarding sovereignty and nationhood. “We are defining ourselves based on the federal government and colonial thought. We’ve reached a bridge, and its time to go back to our old ways in a sense, but also build up those old ways and make sure they work today,” she said.

Landry’s number one issue is violence against native women. She engaged United Nations Special Rapporteur James Anaya on this topic during his recent official visit to Canada. “In Canada there are 600–1000 missing and murdered Indigenous women. These women are left nameless and voiceless, and it’s a frustrating thing to see,” she told him. Landry notes that this violence against women comes in partnership with violence on First Nations territories, and is reflective of a legacy of colonialism. “Traditionally we had clan mothers and systems that prioritized women in our communities. Today this violence is tied to low socio-economic status, high incarceration rates, and related to how women in cities are living in between two worlds,” she says. The issue is personal for Landry, who was in a violent relationship for four years. She hopes that her story may be inspiring to other Native women: “In order to get out of that, I turned back to ceremony. That’s what really made me re-focus and re-evaluate my life.”

Landry grew up in an urban setting and straddles both urban and Native worlds—a complicated position that is the source of some inner conflict. “It’s a very difficult process,” she says. “I’m completing my masters right now. I almost quit so many times because the same thought was going through my head; why am I getting my masters degree at a western institution when I can’t even speak my own language fluently? There were many nights when I was crying and asking Creator, why can’t I speak my language, and why am I following this colonial path of success? In order to overcome these colonial systems you kind of have to pretend to be one of them, but never ever turn your back on who you are as an Indigenous youth. It’s a very difficult thing to deal with as an Indigenous person.”

Because of her own struggles, Landry is able to give advice to other Indigenous youth facing similar questions. “If you ever have hopelessness . . . speak to your elders and go to ceremony. There were many times over the last six months that I felt complete hopelessness. I said, I’m going to give up, I’m done with this fight, I’m done with this struggle, I’m just going to live in everyday modern life. And I went to ceremony and got this message: keep up the fight. It’s worth it.”