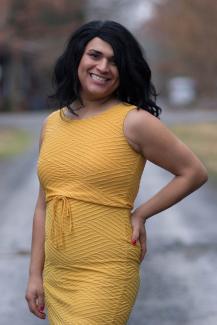 Naja Siwayul ipal Kuskatan.Ninemi ka Tal ipal Tajtakatijwani TalSital. I am a Two Spirit Trans Womxn from Kuskatan (El Salvador). I live at EarthStar Two-Spirit Nation, a safe homestead for Two-Spirit Nation and our QueerTrans/Interex Black and Indigenous siblings, located on a 65-acre territory in Appalachia on ancestral Shawnee and Cherokee lands. Historically, Two-Spirit people have been excommunicated by their communities, murdered by families, or ignored by society. There were some clans, Tribes, and nations who uplifted their Two-Spirits, but because of colonialism, Two-Spirit sovereignty has been stolen. My goal is always to uplift Two-Spirit people, especially in spaces where Two-Spirit voices are silenced (such as Latinx/ Latin American and artistic spaces), and so Creator has led me to these wonderful community groups that are proud to uplift Two-Spirits. As my ancestors before, I always had difficulty finding a community as a TransQueer Central American Indigenous Two-Spirit, so when I met the people in these groups, I was able to locate my sovereignty.

I left Kuskatan with my mother and brothers in the mid-1990s to reunite with my father, who also was seeking refuge ka kwipka (“towards North”) to the lands known internationally as United States during the Salvadoran Civil War. I grew up in ancestral Piscataway Territory in Northern Virginia and Washington, D.C. I later married a non-Indigenous man and moved to Lenapahoking (ancestral Lunaape territory known as New York City and Jersey City), where I realized that was not the move for me. I am now in a relationship with another Two-Spirit, a Kainai non-binary persxn named Ahanu. I am the director of Art & Culture at Trans Latin@ Coalition DMV, a branch of the national Trans Latin@ Coalition. I plan art events, fundraising for arts causes, and work with the vulnerable Trans Latinx community of colonized territory of several Tribes (including various Powhatan Tribes including the Pamunkey; Anacostins, Powhatan Tribes, Tauxenent Peoples, and many more), known as Washington, D.C., Maryland, and Virginia, which includes Two-Spirit and Black Trans folx to ensure our ancestral stories are alive and well, and use my access to the English language, state and federal documents, and public education to represent and advocate for the Coalition. I am also the artistic director of Nelwat Ishkamewe (“Indigenous Root”), a Two-Spirit arts collective centering around healing justice through writing, performance, crafting, artistic advocacy, and education. Since 2015, we have been working to uplift Two-Spirit ancestors, youth, and narratives in Washington, D.C. We have had the pleasure of collaborating with various Indigenous communities, including youth and elders, and have presented over a  dozen non-funded, community-centric, decolonial theater productions.

Many non-Indigenous folks do not seem to want to comprehend diverse Indigenous cultures, and instead choose to homogenize or erase Indigenous Peoples. For Two-Spirits, this means completely ignoring the diversity in gender found amongst Indigenous Peoples. When colonial governments say there are two genders, that means that legally, Indigenous traditions are not valid or protected. This anti-Indigenous system of power prevents Two-Spirits from engaging fully with the colonized world as our true selves, and forces us into binaries that we must seek for protection. It is important to remember also that binarism is not a product of colonialism, but has been infesting Indigenous communities across the continent for generations. Not all nations, tribes, or clans recognized the solemnity of Two-Spirit people, and instead chose to turn their back on them, creating Two-Spirit Nation —a symbol of resistance, of a people left behind, rejected by their own. There are countless homeless Two-Spirits because our communities give up on them. The belief that only the non-Two-Spirit Man and the non-Two-Spirit Womxn are valid is called binarism, which will continue to harm Two-Spirits until there is healing for Two-Spirit Nation.

Two-Spirit youth in particular face an additional threat because of ageism; many older folx do not value the contributions of the youth because they have not lived as long, and that prevents Two-Spirit youth from being able to advocate for themselves and their communities’ needs.

However, anti-Indigeneity, binarism, and ageism do not need to bring Two-Spirit Nation down. Our non-Two-Spirit families can uplift our bodies, protect our solemnity, defend our rights, and celebrate our lives every single day. Do not gender fetuses and newborn babies simply because of their genitals, and don’t register them under a colonial binary system. We protect Two-Spirit Nation by protecting babies. Allow babies to grow into youth, and youth to grow into adults. They will tell you what pronouns to use. They will tell you if they are Two-Spirit, Trans, Queer, Asexual. Let babies live, without imposing anti-Indigeneity or binarism on them. After I graduated high school, I got into a musical theater program in Santa Fe, New Mexico, but I was unable to attend because I wasn’t able to secure my full tuition. Instead, I went to community college and studied a theater arts career track.

After graduating, I went to an acting school in colonial Washington, D.C., where I graduated from a three-year acting program that focused on classical European theater, film production, and the business of the acting industry. I worked in the so-called D.C. “theater community” for a couple of years, and eventually became traumatized by its anti-Native and transphobic nature. Very few non-Indigenous artists in D.C. advocate for Indigenous artists, and nearly zero non-Trans artists in D.C. advocate for Trans artists. Two-Spirit artists become invisible, despite the fact that Two-Spirit people have been doing art on ancestral Native land for much longer that Washington, D.C. has even existed. It was not the place for me to thrive as an artist, or survive as a humxn. The main challenge I face as a Two-Spirit artist is that of invisibility. In order for me to have work, I have to erase an aspect of my Truth. I either have to identify with a binary, erasing my non binary identity; or I have to identify with a colonial culture, erasing my Indigenous identity; or I have to identify with a race, erasing my truth as a Nawat Siwayul. It is really unfortunate that the only time a theater will call me in for an audition is when they need an Indigenous or Trans persxn. The simple exclusion of Two Spirit folx from the arts is a challenge. Having so-called theater professionals tell me that I’m not right for a part because I don’t look like the rest of the actors, or that I need to alter a sacred part of my appearance to fit their mold of what an actor is supposed to look like, prevents Two-Spirits from engaging fully as artists. I have worked as a camp counselor, band coach, director, and instructor for various art programs and groups, including Nelwat Ishkawewe, GirlsRockDC!, Latin American Youth Center, and various colonial theater companies. Nelwat Ishkamewe has been developing plays for youth, including my plays, “The Cosmic Twns/Lxs Gemelxs Cosmicxs” and “Yultaketzalis,” and working with youth from Grupo Maya Cultural de Centreville and Latin American Youth Center to inspire the uplifting and reclamation of ancestral arts and traditions. We produced an annual theater festival for Two-Spirit artists and worked with a Two Spirit artists surviving on ancestral Piscataway territory and Appalachia. Right now, Nelwat Ishakamewe is raising funds to publish the Anthology of Two-Spirit Healing, a collection of works by over 20 Two-Spirit artists, edited by Tsaitami Duchicela, Dane Figueroa Edidi, Ahanu Tapepechul, and myself. We need everyone’s help to be able to accomplish this historic collection of plays, poems, stories, drawings, photography, and graphics, but we especially need the help of our non-Two-Spirit allies.

My advice to Two-Spirit and non-Two-Spirit Indigenous youth is to believe in your ancestors. Our ancestors protect us every day of our lives. We are the proof that they resisted. You are your ancestor’s dream. Please know that you are not your body, and that your body is not you. You are a Spirit, and your body is your vessel to communicate with this world. Creator did not make a mistake with your Spirit. Creator gave you this vessel because they wanted you to experience the beauty of the world they made for us. Creator has put you here to thrive.

My experience is different than those

Call me Femme, Stud, Boi, Gurl, I can adjust

“Nan” — call me Mom; whatever you propose

My gender is f*cked. I am genderf*cked

I am Indigenous, I must be lucked.

Creator has control, I must obey.

I honor Sylvia — the transgender Saint.

And We’wha, and Marsha, and all the fam.

My gender in balance with our nation

To uplift the Seventh Generation

Sonnet from upcoming Womxn Card: A Chapbook of Sonnets about Irreversible Medical and Social Assimilation into White Womxnhood