Universal Periodic Review: A Potent Process for the Realization of Human Rights in Indigenous Homelands 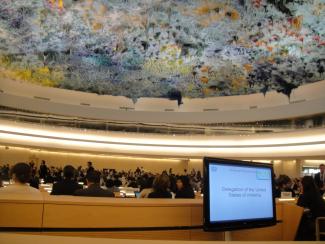 The Universal Periodic Review was established to create a consistent commitment of each UN member state to meet its human rights duties through interactive dialogue. In the first cycle (2008–2011), each of the 48 member states participated in its national review, appearing before their colleagues to present their human rights record. In the second cycle now underway (2012–2015), every state will again participate, with a total of 30 countries appearing before their colleagues to share developments regarding recommendation implementation and emerging rights challenges. The second cycle offers opportunity for more best practices to be created by civil society coalitions rooted in creativity and courage.

Preparation, Interaction, Consideration, Adoption, and Implementation are the five phases of participation in the Universal Periodic Review. In total, these five phases amount to a 24-month campaign that educates, engages, and empowers Indigenous Peoples to connect issues at the grassroots level with global governmental responsibility based on  recommendations drafted in their own communities and countries.

Phases 1-2: Preparation and Interaction
The spirit of the first two phases is to identify the issues preventing the implementation of the articles of the UN Declaration on the Rights of Indigenous Peoples; to draft questions Indigenous Peoples want to ask or do ask but never receive adequate responses; and to draft recommendations that prescribe steps to secure the realization of rights for a life of equality and dignity for Indigenous Peoples.

The Preparation phase begins 18 months before a state’s review and is an opportunity to involve whole communities in creating documents based on both individual and systematic violations of dignity and equality. At the grassroots level, it is vital to share the purpose of the Review and to host consultations for writing the stakeholder reports. At the national level, similar actions should link Indigenous peoples and nations. All forms of communication should be utilized, from community radio to social media. For The Testify! Campaign, for example, coordinated with WITNESS and the US Human Rights Network, Indigenous Peoples made their own videos highlighting human rights abuses. The Preparation phase is crucial for allowing Indigenous values to shape a state’s review. It allows communities to review their enshrined rights, as well as recommendations from the first Review cycle— and to note whether there were increased violations or improvements.

The Interaction phase signals a shift from organizing in one’s own homeland and gathering testimonies from people on the ground to coordinating at the national level and beginning conversation based on specific questions and recommendations raised in previous Review sessions. The first activity is to transform the stakeholder reports and information gathered into succinct 1-to 2-page advocacy sheets, which will be basis for conversation with countries’ diplomatic missions participating directly in the review.

Indigenous Peoples’ rights have been mentioned over 250 times since the creation of the Review. Certain states have raised important issues regarding basic rights and fundamental freedoms of Indigenous Peoples; it is important to identify and arrange meetings with them in Geneva. Mexico, Ecuador, Bolivia, Peru, New Zealand, Norway, Denmark, Austria, France, and Germany have all raised the issue of Indigenous rights during most reviews. It is also possible to meet with specific states on common issues covered in the community reports, such as women’s rights, environmental concerns, multinational corporation actions, education, and cultural rights. One can also coordinate a side event with a panel or feature films to provide an overview of the human rights situation of Indigenous Peoples.

Another important initiative can be a meeting with the embassies of identified ally member states. Such a meeting depends on whether there is a culture of violence within a country’s  government; if there is no repression or aggression staged against human rights advocates, it can be an affordable way to get a message from the community to a nation’s embassy and shared with the UN. Another important avenue for advocacy depends on the state’s participation in the national consultations called for by the Review, which present a chance to influence the national 20-page report.

Phase 3: Consideration
The Consideration phase is the most compelling, as rights advocacy can be openly witnessed with diplomats grilling national policymakers and governments defending their policies. At the community level, one can gather urgent updates to illustrate compelling issues. At the national level, one can demand a Town Hall meeting in Geneva and a nation’s capital to promote national discussion and an action plan to implement Review recommendations. At the global level, one can continue the conversation with diplomats and secure commitments to raise Indigenous rights. One can also organize another side event to allow impacted individuals to share stories with member states that can transform into real recommendations for change. The actual Consideration phase is only 3.5 hours, yet live webcasting allows Indigenous Peoples around the world to view it together. Community viewing events can also be hosted in homes and cultural centers. In Geneva, a Town Hall meeting brings together the government delegation with Indigenous representatives to discuss the results immediately following the Review. At minimum, there should be a press conference or meeting to set a schedule to discuss adoption of recommendations.

Phase 4: Adoption
The Adoption phase is set for four months after the conclusion of the Review and will end with the actual adoption at the UN Human Rights Council session. The most important aspect of this phase is to maintain momentum as Review results are widely distributed and discussed at the local and national level. It is essential for those involved in earlier phases to rally around specific recommendations and demand their governments begin coordination of campaigns to realize the recommendations. Art and culture can be vital tools to transmit the contents of the report to a community, and this phase offers opportunity for creative campaigns involving new social media and youth.

The week before the Human Rights Council session, Indigenous Peoples must register online to obtain one of 10 speaking slots to present a 2-minute intervention in Geneva at the conclusion of the adoption. It is also possible to coordinate another side event to share progress regarding implementation of a specific recommendation. Alternatively, Indigenous Peoples can record a 2-minute video to be shown at the Human Rights Council in lieu of traveling to Geneva. The final “speak truth to power moment” will be webcast, so screening sessions can also be coordinated.

Phase 5: Implementation
Once the state under review accepts a recommendation, the real work begins to build a culture of human rights by changing conditions through the realization of rights reflected in the recommendations. The mobilization of those involved in all previous phases is vital to engage people in the decisionmaking process. This important initiative, based on ideas generated and accepted in the previous phases, creates opportunities for states to fulfill their obligations to guarantee fundamental freedoms. Beyond usual “blame and shame,” Indigenous communities can build and shape new policies and practices relating to their human rights. New partnerships with national representatives can be established to realize the recommendations.

There can also be initiatives with member states based on relationships built in prior phases to link aid programs with Review recommendations; in the past, states have provided assistance without ever meeting those intended to benefit, but now Indigenous Peoples can continue the conversation started in the Review process to advocate for realization of their rights. Whether focusing on eliminating racist laws or engaging Indigenous Peoples to create new practices and policies rooted in human rights, there can be followup community, city, and national meetings to develop new standards and laws that reflect input from the Review. There are also opportunities for influence through international pressure at subsequent UN Human Rights Council sessions.

The ultimate aspiration of the Universal Periodic Review is the improvement of human rights in every country with significant consequences for people around the globe. If Indigenous Peoples participate in each phase, there will be a rigorous review and the results will be substantive. It can become a regular measure of how states are implementing the rights enshrined in the Declaration, and it can be the catalyst for the conversation with a country’s leadership to ensure the Declaration is beyond paper, but building better lives for Indigenous Peoples.

Cultural Survival is currently working on coordinating stakeholder reports for the second cycle of the UPR. If you would like to get involved, contact agnes@cs.org.