United in Tradition as Peoples of the Corn 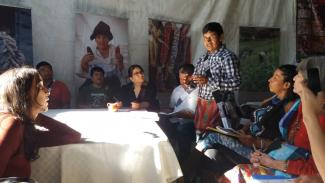 “For life, there must be corn and Mother Earth, but Mother Earth must be healthy.” — Carmen Lozano (Kichwa), Ecuador

Corn has been considered a sacred plant and important food to many Indigenous Peoples for more than 3,000 years, from the north to the southlands of Abya Yala. Communities with diverse climates continue to utilize corn as a main staple of their diet and an important part of Indigenous philosophical and spiritual practices and identities. “We are like a corn husked and watered on all sides; we are all a variety of corn,” said conference participant Carmen Lozano (Kichwa). Elder Duane ‘Chili’ Yazzie (Diné) commented, “We come from four worlds. This is the fourth world, and we are four peoples. The blacks take care of the water, the blue ones the air, the white ones the fire, and we, the dark ones, take care of the earth. Corn is a must to live. The first woman was given corn, a symbol of fertility. As the first people, we feel the pain of Mother Earth.” 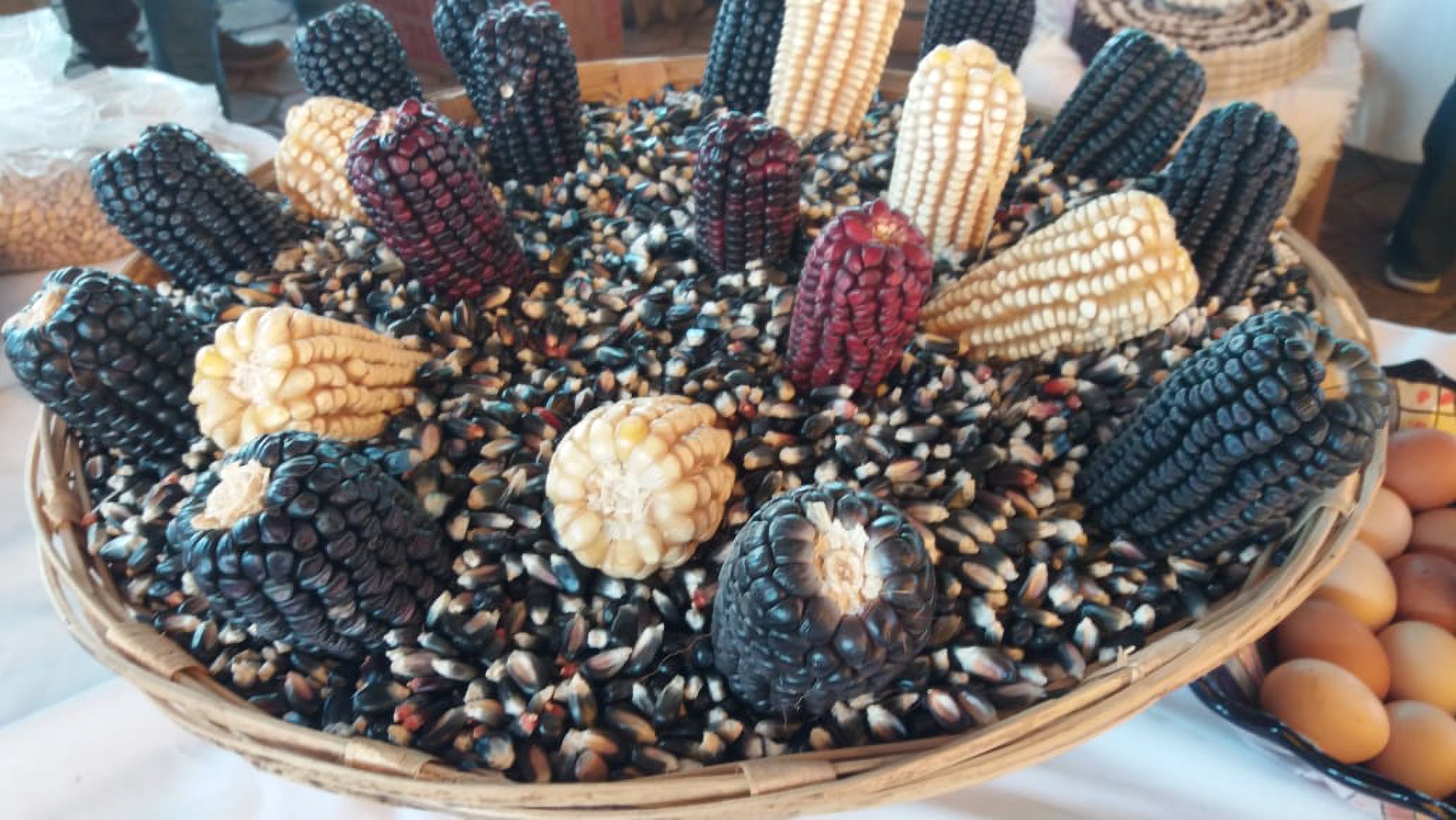 Corn is not planted as an isolated crop. Rather, it is planted with other sister plants such as beans and quash to thrive. This agricultural practice, known as “the milpa” in Indigenous cultures, is also referred to as the three sisters. Lozano, a Kichwa woman and representative of Confederation of Indigenous Nationalities of Ecuador, explains that the planting of corn is also a collective process. “Our grandparents learned to work as a community, and the milpa reflects this collective work when it shares its nutrients with beans and squash and they protect each other from weeds.”

Maize represents traditional knowledge, identities, songs, and the protection of Mother Earth, and needs to be protected against many threats that have intensified in the last decades. Corn is part of Indigenous creation stories, passage rituals to adolescence, the mingas (community gatherings), and deities in the spirit world. Oral tradition has been fundamental for the transmission of knowledge about corn from generation to generation. “In the house after dinner, the father begins to tell how the corn is planted, so the information is transmitted to the children,” explains Aquian Guamán of the Karos Nation of Peru. In the same way, Maya elders and adults retell their creation story about why human beings were created from corn after three failed attempts to create human beings to younger generations. 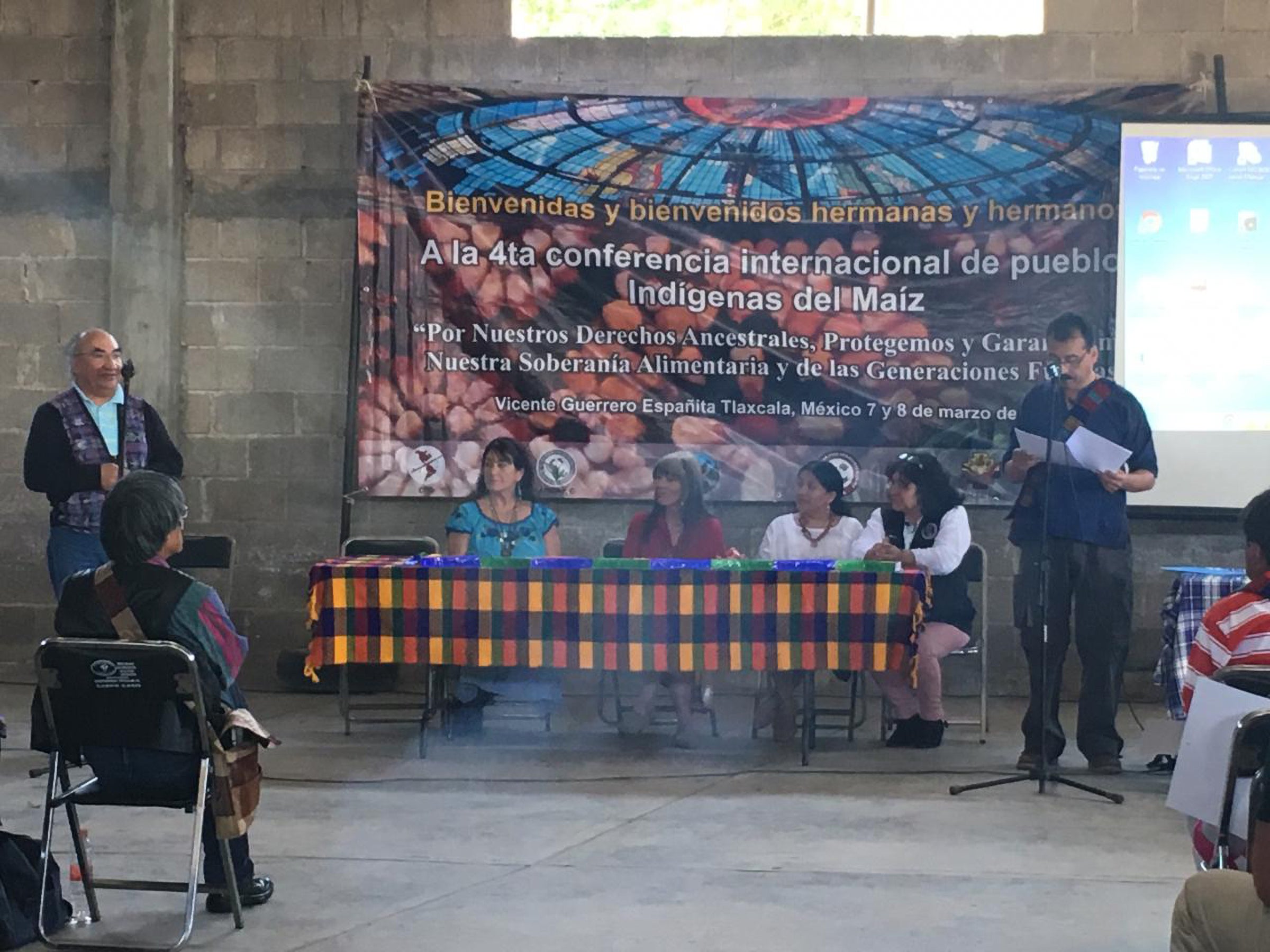 This strong bond with corn and other plants, animals, and waters, make Indigenous Peoples stewards of all forms of life in their territories. Corn and Indigenous communities have had a special and mutually dependent relationship, evolving together since the domestication of a grass called Teocintle to corn 3,000 years ago. However, Indigenous territories are under threat by megaprojects and government policies benefiting corporations. Many governments have neglected their responsibility to protect natural resources with unsustainable or illegal agriculture, fishing, logging, and mining practices, to name a few. Climate change is also affecting food systems, making crops more vulnerable and leading to the abandonment of the  countryside. Genetically modified corn and the laws that promote its cultivation are one of the main threats undermining Indigenous knowledge about corn. The multinational corporation Monsanto, producer of genetically modified seeds, has bought government support to pass laws that would allow them to sell their products in many countries around the world, further threatening corn diversity.

The dispossession of land and water from communities to supply extractive megaprojects puts communities at risk of violence, persecution, and further poverty. The expropriation of Indigenous lands and displacement of people from their original territories where they can plant and live from the land is being experienced in Guatemala, where the government, under the auspices of development, is giving concessions to international corporations for mining, hydroelectric, and highway activities without Free, Prior and Informed Consent of local communities. According to María Josefa Macs, representative of the Committee for Campesino Unity, the Maya Q’eqchi’ community from Cumbre Sacuxha Tatic were victims of a police-led displacement against 25 families in November 2017. The displacement was forced by burning of their homes and destructing their crops. 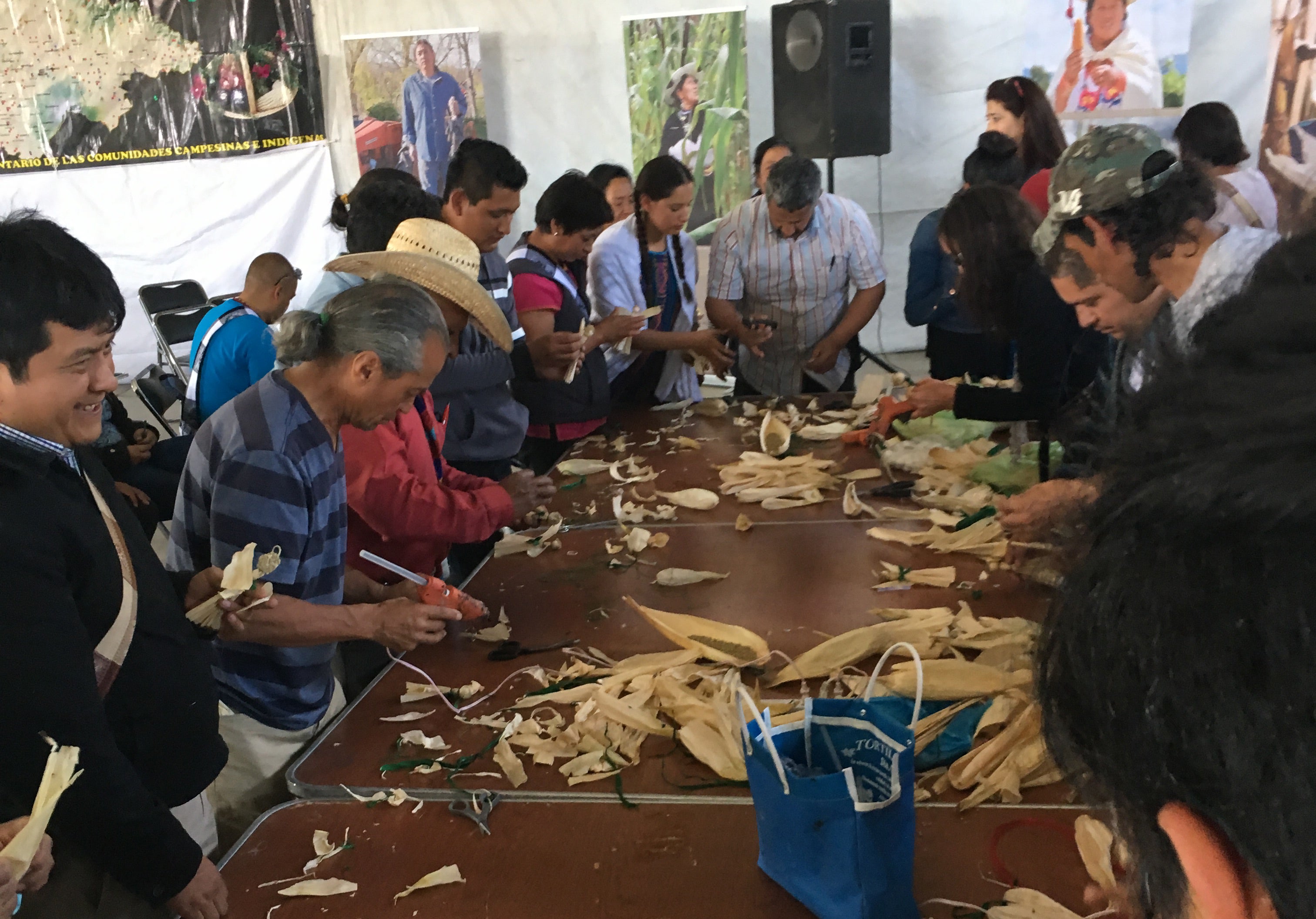 Sebastian Roque (P’urépecha) from Michoacán, Mexico, relates these national and global problems with the loss of connection with Mother Earth, the Cosmos, and time. “The evil spirit should not exist, but we have it in mind; the good spirit is absent, that is why there are many problems and diseases,” he says. It is coming to a time where Indigenous knowledge and practices must be recovered to reestablish balance on Earth, to minimize and re-establish natural resources. Various Indigenous strategies are being carried out at local and international levels to regain food sovereignty, traditional knowledge and practices, and the protection of seeds and other natural resources.

In many countries, there is a movement to recover traditional and collective lands, such as the Indigenous resguardos (reservations) in Colombia, common lands in Guatemala, ejidos and community lands in Mexico, and land claims and non-ceded territories in Canada where Indigenous Peoples want to map, manage, and protect their resources. At the local level, communities are asserting and maintaining their traditional knowledge, eating healthy products, and keeping the forms of production for food sustainability and for higher independence from industrial agriculture involving the family and community in the process. Indigenous Peoples are also recovering lost knowledge and applying new productive strategies to fertilize land and use natural pest control. Seed bank initiatives are popping up in different communities in the north and the south to protect seeds and are also part of networks with other communities and organizations, such as the Native Seed Bank Network in the United States.

In 2006, a movement of Indigenous Peoples in Tesuque Pueblo, New Mexico, declared their territory free from genetic engineering and genetically modified organisms through a community walk to Washington, D.C. Last year, the United Nations Human Rights Council adopted the Declaration for Farmers and other Rural Workers, which is another international tool in addition to the United Nations Declaration on the Rights of Indigenous Peoples to support the right to food sovereignty, protection of traditional knowledge, conservation of biodiversity, and strategies against climate change.

There are also international gatherings on corn where Indigenous communities from the Americas share their experiences, challenges, and solutions about living with and cultivating corn, and corn fairs where  Indigenous communities travel to exchange heritage seeds, both of which present opportunities for the revitalization of traditional knowledge.

In parallel to the 4th Conference held in March, the 22nd Fair of Corn and Other Native Seeds took place at the same location. Gatherings such as this one are essential to unify efforts from different Indigenous agricultural communities to protect natural resources and ancestral agricultural practices. 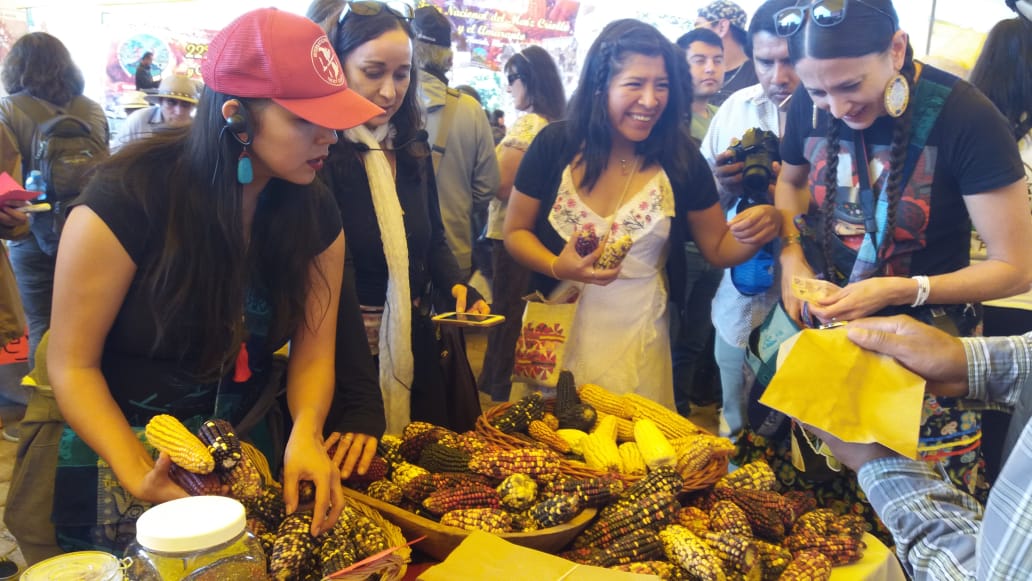 During the Conference, several presenters highlighted how important the participation of young people is in continuing with the traditional practicing agriculture. As youth are following secondary and higher education, there is the risk of disconnecting from the land. Adults motivate youth to harmonize the priorities of education and careers with practicing traditional knowledge. In many communities, youth are actively participating in their communities, using their institutional education while reconnecting to traditional knowledge in agriculture and other fields in search of solutions to today’s problems. As Jesús, a Maya youth  from Campeche stated, “young people are not choosing to leave their communities, they are being forced out for various reasons. Young people are the future, but they need the elders to teach them how to do it.”

Indigenous communities and leaders from the North and South of the continent, speaking different languages and living different ways of life, are uniting and sharing their experiences in the protection of Indigenous corn and other natural resources. As one of the participants of the conference stated, “the most revolutionary thing to do is to plant your own corn and consume locally produced food.” Daily work in the field is the most arduous; to conserve the corn you have to sow it, care for it, and harvest it. Indigenous and campesino communities carry out this work every day, despite low prices of corn and the loss of harvests due to climate change. To ensure the continued viability of this sacred crop, organizations and individuals from the grassroots to international levels must continue to advocate for international policies to protect not only the maize, but also local production of food, Indigenous rights, water, and lands, and to learn from the existing good practices in food sustainability.