On Thin Ice: Subsistence Walrus Hunting and the Adaptation to a Changing Climate in Alaska 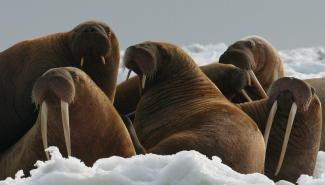 Alaska Native communities along the coast of the Bering, Chukchi, and Beaufort Seas have lived in close connection with the ocean for thousands of years. The bounty of this rich environment, which includes marine mammals, fish, birds, and plant life, has sustained Alaska’s St. Lawrence Island Yupik, Iñupiaq, Central Yup’ik, and Aleut communities since time immemorial. These Alaska Native communities are an integral part of the ocean ecosystem, maintaining their ties to the ocean through the continuation of the marine subsistence lifestyle. This lifestyle represents a reciprocal relationship with the environment and the animals in which traditions of respect are maintained through sustainable stewardship practices and spiritual expressions of song and dance. It has always been characterized by balance, which has allowed for successful coexistence with the ocean environment.

But this balance is now threatened by climate change, which is resulting in a rapidly and dramatically changing ocean environment. One of the species most impacted by these changes is the Pacific walrus, an important subsistence resource for many Alaska Native communities. In a 2004 interview for a traditional knowledge project, Alexander Akeya, an elder from the community of Savoonga, said, “This walrus has been our food for centuries . . . our food has an overseer. Although I wanted to harvest more, our elders would say, ‘Quit hunting, that is enough. Take care of your food, do not be wasteful. If you waste, you yourself will cause the Creator to cut you off . . . take home enough of what you need, with a limit. This animal, your food, is very important. We want it to live just as we strive to live.’”

Pacific walrus depend on sea ice as a platform for resting, calving, and nursing, and this sea ice habitat is rapidly deteriorating due to climate change. This has opened the door for other impacts to the environment of the Pacific walrus, such as increased shipping and resource exploration activities in the area. Global carbon dioxide emissions are resulting in the rapid acidification of the Bering, Chukchi, and Beaufort Seas, whose waters are particularly vulnerable to ocean acidification due to their cold temperatures. This in turn has implications for the viability of walrus prey resources, mainly clams, whose shell formation is impacted by the acidity of the water.

These cumulative pressures, largely caused by excessive global carbon dioxide emissions, are of great concern to Alaska Native subsistence communities that depend on healthy and sustainable marine ecosystems. Climate change impacts are already being felt by the subsistence communities in many ways. Thinner sea ice makes for more dangerous hunting conditions and hunters must now travel farther to access marine mammals. Changing weather patterns, partially caused by decreased sea ice presence, are resulting in more severe storms that affect both hunting opportunity and the integrity of shorelines through increased erosion.

In an interview for another traditional knowledge project in April 2015, Vince Pikonganna, an elder from the King Island Native community, offered his perspective on the impacts of climate change: “Everything is changing. One thing affects another. Mother Nature can take care of herself, it’s just that we the humans are the culprit of what she’s suffering through. She’s reacting to what we’ve been doing to her for a couple hundred years now—all this pollution, destroying the land, and destroying the oceans. We have been told by our ancestors about the future. We’ve been told that [we] will need to watch out for the four winds. The four winds will be getting stronger in the future and unexpected weather patterns will start to be happening. And now it’s happening, right before our eyes. I was practicing how to tell the weather in our Iñupiaq way 30 years ago. But some 20 years ago, everything got chaotic. This weather got chaotic.”

One stark example of climate change impacts on marine subsistence is the walrus harvest disaster that occurred in the communities of Gambell and Savoonga on St. Lawrence Island in 2013. That year, unusual weather conditions and sea ice patterns prevented hunters from accessing the walrus as they migrated past the island, resulting in a record low harvest and food shortages for the communities. The state of Alaska declared a disaster, which leveraged support for food aid from many organizations, but the question remains as to how the communities will adapt if these conditions continue. Since 2013 harvest numbers for Gambell and Savoonga have not returned to normal levels, and the communities of Diomede and Wales, located in the Bering Straits region, have also declared harvest disasters due to similar ice and weather conditions.

Not only does the walrus provide large amounts of nutrition for the communities, but the continued consumption of this subsistence resource is culturally and spiritually important to the people of the communities. Furthermore, raw materials provided by walrus also help meet the material and financial needs of the communities. Alaska Native ivory carvers are renowned for their skill, and the sale of walrus ivory artwork and jewelry are an important source of income in the extremely limited cash economy of rural Alaska. Other material and cultural needs of the communities are also dependent on walrus subsistence, including the making of walrus skin boats for hunting and walrus stomach drums for Native dancing.

In a 2004 interview, Leonard Apangalook of Gambell explained how changing weather has impacted his community: “The ice recedes, goes so fast that our walrus season is very short. And of course we get a lot of wind, too. It’s affecting us now. The animals that we hunt are affected by it and that is how it affects us. I have seen so much change with our climate over the years . . . the enormity of the problem is so big it involves many countries and the whole world.”

The ability of Alaska Natives to continue to sustainably subsist on walrus and other marine mammal resources is an inherent Indigenous right, and climate change is threatening this right. The Pacific walrus is currently under review by the US Fish and Wildlife Service for listing under the Endangered Species Act, not because of current population decline, but because of anticipated impacts to the population over the next 100 years caused by climate change and ocean acidification. As a mitigation measure the Service has suggested future restrictions to subsistence walrus hunting, an approach that the Eskimo Walrus Commission takes issue with. The Eskimo Walrus Commission is an Alaska Native co-management entity representing 19 walrus hunting communities from Barrow to the Bristol Bay region, which advocates on behalf of Alaska Native walrus hunters in the management process. Its mission is to protect the Pacific walrus population. The Commission has expressed the view that because subsistence walrus hunting is not the root cause of the issue with the walrus population, solely focusing on hunting restrictions cannot be a viable management solution.

The gravest threat to the Pacific walrus population, and thus to the Alaska Native subsistence communities that depend on them, is carbon emissions. In December 2014, the Commission passed a resolution urging the US Fish and Wildlife Service to make clear recommendations to the federal government to significantly reduce US carbon emissions and invest in clean energy. Through this resolution, the Commission identified the fact that the current management approach would not only be ineffective in the long term, but would threaten the continued survival of subsistence communities. As an Indigenous organization, the Eskimo Walrus Commission recognizes that threats to the Pacific walrus cannot be addressed on its own. A truly effective management approach must seek to protect not only the walrus, but the whole ecosystem in which it exists, recognizing that the rights of human subsistence communities that interact with and depend on this ecosystem must be protected also.

—Katya Wassillie (Yup’ik/Iñupiaq) is the Eskimo Walrus Commission specialist at Kawerak, Inc., the tribal consortium for the Bering Straits region of Alaska. She is from the communities of Pilot Station and White Mountain, Alaska, and is an active participant in the subsistence lifestyle.

Photo: Hunting for walrus is a way of life for Alaska Native communities. Photo by Tom Gray.