There Should Be No Borders for Indigenous Peoples: Victoria Tauli-Corpuz 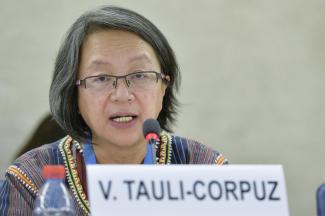 
Victoria Tauli-Corpuz (Kankanaey Igorot from the Philippines), UN Special Rapporteur on the Rights of Indigenous Peoples

I am from the Cordillera region in the Philippines. There is a lot of out-migration of Indigenous Peoples, whether from their own communities to the urban centers, or out of the country. In the Philippines we have a big number of Indigenous women and men who are outside of the country, mainly because they cannot find jobs in the Philippines. That’s a big issue that has to be addressed. There are multiple factors pushing Indigenous Peoples out of their communities, and these have very serious implications in terms of the strength of the community to be able to continue practicing their cultures and transmit them to the next generation.

In Asia, there are many Indigenous Peoples across national borders. Theoretically we should be able to continue to be mobile and to visit relatives across the border. But that’s where a lot of problems come, because now there are all these so-called antiterror laws where Indigenous Peoples are always suspected of being insurgents or terrorists, and therefore their mobility and their capacity to walk across borders is very much undermined. There should really be no borders as far as Indigenous Peoples are concerned because they existed in those territories before these nation states came into the picture. It is the obligation of nation states to allow for that.