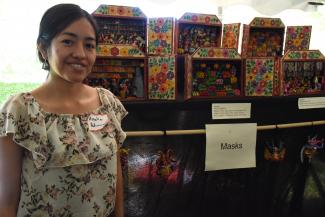 The Jimenez family of Ayacucho, Peru, has made a living making retablos, ornate wooden boxes that contain brightly colored figurines arranged in religious, historical, and everyday scenes, for generations. Retablos are an important part of traditional Andean folk art that serve as a means to tell stories. “We make ornaments featuring traditional festivals, Andean cosmovision, and the daily activities of the people of the Andes,” says Amalia Palomino Jimenez, a member of the family who has been vending at the Cultural Survival Bazaars for the past two years.

Palomino learned the art from her grandfather, who repaired retablos in churches in his community. “My grandfather was recognized as a great master of the retablo ayacuchano. He made retablos and crosses. My mother learned this art in the workshop, helping to model and paint. In 1988, my whole family, including my grandfather and my parents, moved to Lima because of terrorism and civil unrest led by the communist militant group Shining Path in Ayacucho,” Palomino recalls. In Lima, Palomino continued making retablos in her grandfather’s shop where her whole family participated in making the folk art by mixing colors and modeling the figures, along with providing ideas and designs. For many families facing political violence in rural areas, selling retablos commercially in cities has become an important means of earning a living. 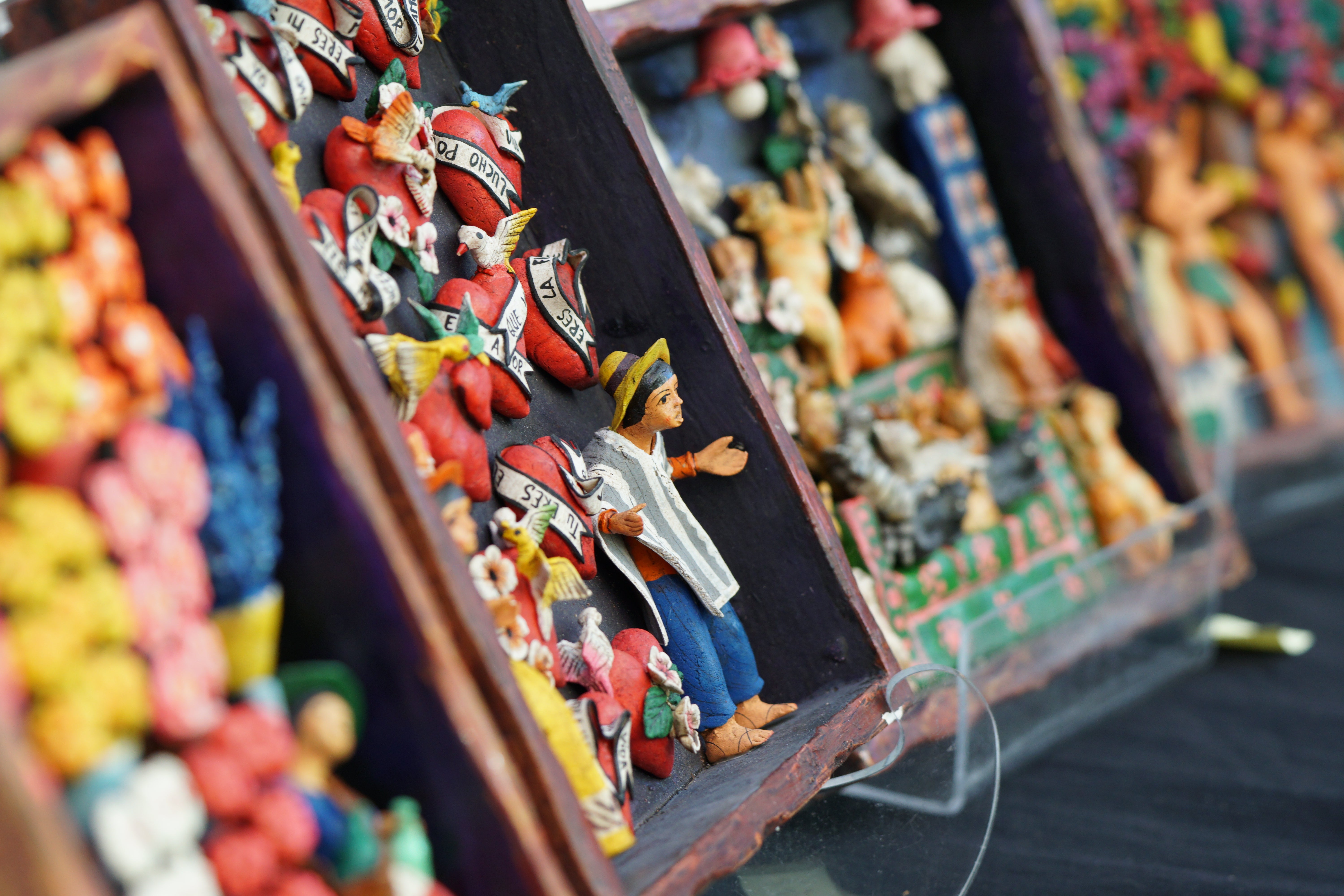 Each retablo is made by hand using techniques passed down in the family. Palomino explains the process of making a retablo with its detailed figurines and bright colors: “We sculpt and polish the wooden boxes, then we paint the background and frames. Each piece of the retablo is made with dough that we prepare in the workshop, combined with plaster. We check the texture of the dough to see if it’s ready or not, then proceed to make each figure. Later we paint each figure, and once they have dried, we place them in the box with glue.” The decorations that surround the figurines within the retablo are made from natural and recycled materials. The whole box is then painted with aging liquid that is prepared in their shop.

Historically, retablos have been used in Catholic churches in Spain and Latin America where they were placed behind the altar depicting religious scenes. Today, retablos are still used in the Catholic tradition, but are also used to depict traditional Andean life. In Ayacucho, where the Palomino family lives, retablos preside over livestock branding ceremonies. “These retablos include figures of saints, which families place in their houses to pray for protection of their livestock, for abundant grass, or for defense against damage caused by nature,” she says. There are several different types of retablos that can be made, including marco retablos, which are a wide square or rectangular frame in which the scenes are built in the frame with a space in the middle; cuadro retablos, which have scenes that take place in the main part of the wooden box, and the more ornate retablos clasicos, which contain a scene and have decorated doors that open and close with a decorated panel above.

In Peru, where illegal mining and coca production affect the ability of Indigenous Peoples to continue their traditional ways of living, the craft of retablos are an important facet of achieving economic self-sufficiency. It is not just business, however. For Palomino, sharing these beautifully detailed retablos is a crucial way to share traditional art and typical life of Ayacucho with the rest of the world.