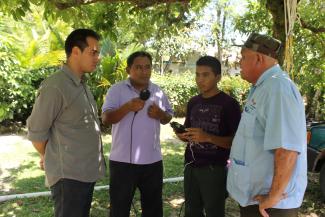 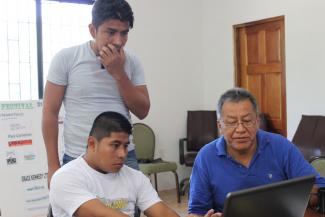 In the district of Toledo in Belize, Maya people represent more than half of the population, living in approximately 39 villages. The Maya have their own ancestral government system and a history of relation to the land for thousands of years, with their own language and distinct culture. Maya leaders are currently strengthening their right to collective land title of their homeland and the protection and conservation of their resources while finding innovative ways to strengthen their identity as a people through the revitalization of their culture, language, and spirituality.

Within this framework of revitalization of culture and maintaining the peoples‘ connection to the land is the Maya community radio Ak‘ Kutan. It is the only state-authorized community radio station able to reach the 39 Maya communities in southern Belize. Two grassroots organizations, Julian Cho Society and the Maya Leaders Alliance, identified the need to strengthen community radio as the voice of the Maya; a voice that is able to transmit to different generations in their own villages; a voice that is in their own Maya languages with content that strengthens Indigenous self-determination, protection and conservation of the land and resources, community organization, and culture. Cultural Survival is supporting this goal with a three-year training program in community journalism and radio production to Q‘eqchi‘ and Mopan Maya in Punta Gorda, Belize and Guatemala.

TRAINING
The first of five trainings in community radio journalism took place in Punta Gorda from June 11–16. On the first day, the training focused on what Indigenous community radio means; the role of radio within a context of Indigenous resistance, self-determination, connection to the land, and community engagement. Participants suggested terminology to identify community radio in their own language: “ab‘ib‘al atin” (radio tool), “Puktesib‘aal aj Ralch‘och” (radio as a system), and “mansa t‘an ich ik‘” (another variation of radio tool) were some of the suggestions. They also learned about listeners’ preferences and how to combine music with content. Community journalists have a code of ethics that applies to their investigations and interviews, which students also had a chance to practice during the training.

During the next two days, participants learned how to select an issue or a piece of news and conduct a survey, obtaining Strengthening Maya Community Radio In Belize practical experience on how to record ambient sounds and conduct interviews in the process. Initially the students were nervous about approaching people for interviews, but ultimately found that people were willing to open their hearts and have a conversation. The last two days focused on practical training, as participants were sent to do community interviews in pairs. Trainee Rigoberto Pop stated, “When I went to do the interview, I felt like a professional. People took me seriously, I think because they saw I had the equipment and gave me the information I needed.” On the last day of the training participants visited Radio Ak’ Kutan in Blue Creek to introduce themselves to listeners. Every participant had the opportunity to try the microphone on air and share their experience in the training along with their expectation for community radio. Community and project leaders, Cristina Coc and Pablo Mis, accompanied participants to the radio station.

WOMEN’S PARTICIPATION
Some women have participated in certain aspects of Ak' Kutan radio operation, but Julian Cho Society saw the need to include more women to address the needs and interests of this important sector of Indigenous communities. One of the purposes of this project is to increase women’s participation at all levels of radio; thus, recruitment focused on encouraging women to join. Julian Cho Society and the Maya Leaders Alliance will continue to recruit women to community radio even after the training is complete, as their lack of participation has been a long-term gap for community radio and other political, social, and economic spheres.

LOOKING FORWARD
Cultural Survival supports initiatives that empower Indigenous community radio around the world, as it is an important means for peoples to be informed and educated about their own history and original forms of government, justice, health, and community organization systems. The Maya of Belize envision community radio as a means to strengthen their identity, their language, and their inherent rights as a people to have self-determination in all aspects of their lives, including their right to collective land title and the protection of their local resources. By training Indigenous community journalists, Cultural Survival supports the vision of the Maya of Belize to thrive in the near future.

THE PARTICIPANTS
Frani Ba
Ba, 19, is from from Jalacte and speaks Q‘eqchi‘. He graduated from Toledo Community College. Elodio Rash Rash, 25, is from Indian Creek village.He served as a board member for the Toledo Cacao Growers Association and worked with Humana People to People supporting community development. In 2014 he completed his associate’s degree in business and was elected as the alcaldes’ secretary in Indian Creek.

Juan Mes
Mes, 32, is from San Jose Village. He graduated from the University of Belize in 2015 with a degree in elementary education. Since 2003 he has been an elementary school teacher and community volunteer in preschool education, also volunteering for the Toledo Maya Cultural Council adult literacy program.

Rigoberto Pop
Pop, 22, is a Q’eqchi Maya from the Village of Santa Cruz. He is trilingual in Q’eqchi‘, Mopan, and English. He is a recent graduate of Tumul K‘in Center of Learning, focusing on the area of agriculture, and has volunteered at Ak‘ Kutan Radio for three years.

Ana Cal García
Cal García, 33, is a Q‘eqchi‘ Maya from the Village of San José. She is multilingual in Mopan, English, Creole, and Spanish. She is currently completing a master‘s degree in English from the University of the West Indies, Jamaica.

Victor Cal
Cal is a Q‘eqchi‘ Maya originally from Guatemala. He is an elementary teacher at Blue Creek Village school and the founder of Ak‘ Kutan radio. He is also co-founder of the Alcaldes Asociation of Toledo and a teacher at Maya School Tumulk‘in. Ana Cal Garcia Rigoberto Pop