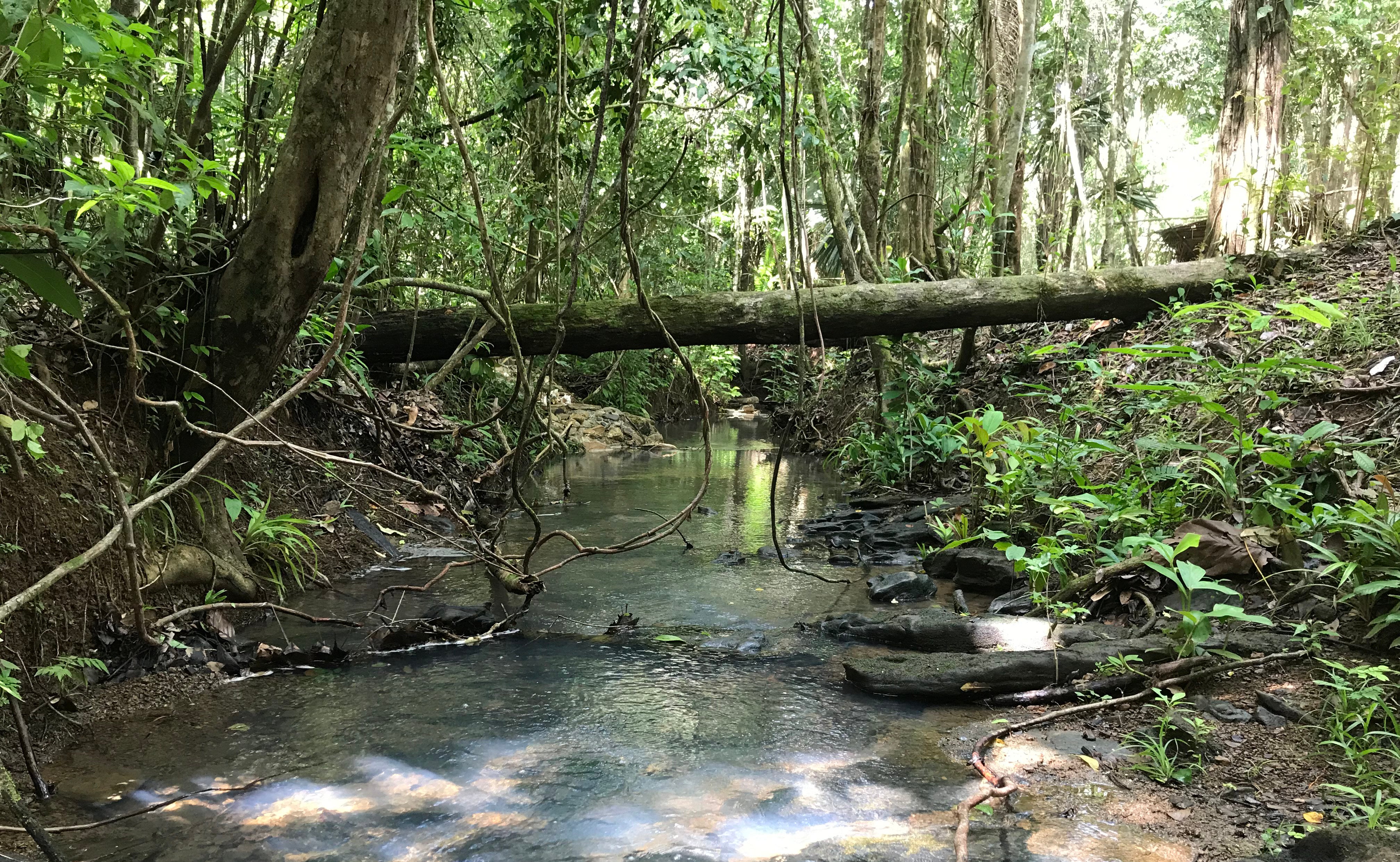 As world leaders head to Glasgow, Scotland, for the United Nations Framework Convention on Climate Change (UNFCCC) Conference of Parties 26 (COP26), the global community turns its attention to climate change, potential solutions, and how to financially resource these efforts. However, for efforts to be meaningful and effective, a true and authentic analysis of actions taken in the last decade or more, what works, what doesn’t, is imperative. Governments and citizens alike must do a self-analysis – we must ask the difficult questions such as - have we truly changed our reckless ways towards Mother Nature, and are we listening and taking into consideration the input of those communities that are most affected by climate change?

Indigenous Peoples make up 6.2 percent of the global population and Indigenous managed lands are home to about 80 percent of the world’s biodiversity. Indigenous Peoples manage or hold tenure over 25 percent of the world’s land surface and manage at least 24 percent (54,546 MtC) of the total carbon stored above ground in the world’s tropical forests, a sum greater than 250 times the amount of carbon dioxide emitted by global air travel in 2015. Areas titled to Indigenous communities have been shown to store 36 percent more carbon per hectare than public conservation land. According to an analysis by the World Resources Institute, by securing Indigenous land rights in Bolivia, Brazil, and Colombia alone, we could avoid the release of up to 59 megatons of carbon emissions every year — the equivalent of taking 9 to 12 million passenger vehicles off the road. The 2019 IPBES report found that between 65 to 75 percent of the Earth’s surface has been significantly altered by human actions. However, on average, these trends have been less severe or are avoided entirely in areas held or managed by Indigenous Peoples and local communities. Leading climate researchers have concluded that “[there is] an urgent need to make collective tenure security a critical part of emission reduction strategies. Empowering forest peoples to continue their historical role as stewards of the environment is essential for stabilizing Earth’s climate.” When Indigenous Peoples have rights to their lands, they are able to steward these lands in ways that prevent fossil fuel extraction, maintain carbon-capturing forests, ensure soil regeneration and carbon capture through traditional agriculture and agroecology, and protect biodiversity. The gap between recognized and unrecognized land rights points to significant opportunities to scale-up the protection of Indigenous lands.

The science is clear—Indigenous communities are critical in reversing the climate crisis. Indigenous Peoples have long been viewed as victims of the effects of climate change, but in reality, they are agents of climate solutions and environmental conservation. The consequences of climate change in Latin America may differ from those in Africa or Asia, but one thing remains true: local resilience requires local traditional knowledge. We cannot address a global crisis without focusing on local, place-based solutions. Supporting Indigenous communities at the local level supports and enriches the ecosystem in that region, and the health of that regional ecosystem impacts that of surrounding ecosystems. This strengthens the interconnected and interdependent web of ecosystems (or web of life), and Indigenous Peoples’ traditional knowledge is the catalyst for the climate change mitigation our world desperately needs. From traditional Indigenous home design to traditional fire management, from agro-pastoralists to agroecology and agroforestry methods, Indigenous Peoples have lived in reciprocal balance with their environments for millennia and continue to do so up to this day. Therefore, we must do everything that we can to support, encourage, and safeguard Indigenous People’s stewardship of their territories.

“As a young person, land tenure security is important for the survival of future generations because we are just borrowing from them, it ensures that we continue our traditions - ancestral connections,” says Florenio Xuc, a young Q'eqchi farmer and university student from Indian Creek, Toledo Belize.

In Belize, Indigenous Peoples make up about 11.3 percent of the population, the majority of whom are in southern Belize, particularly the Mopan and Q'eqchi Mayas. Belize is a small Central American country that politically aligns itself with Caribbean countries. Belize, like small island countries in the Caribbean, has been hit hard by the climate crisis,  as described in its recent Nationally Determined Contribution (NDC) submission ahead of COP 26. While Belize is not a grave contributor to greenhouse gas emissions, it could do more to demonstrate leadership in fighting climate change and mitigate its effects on local communities. 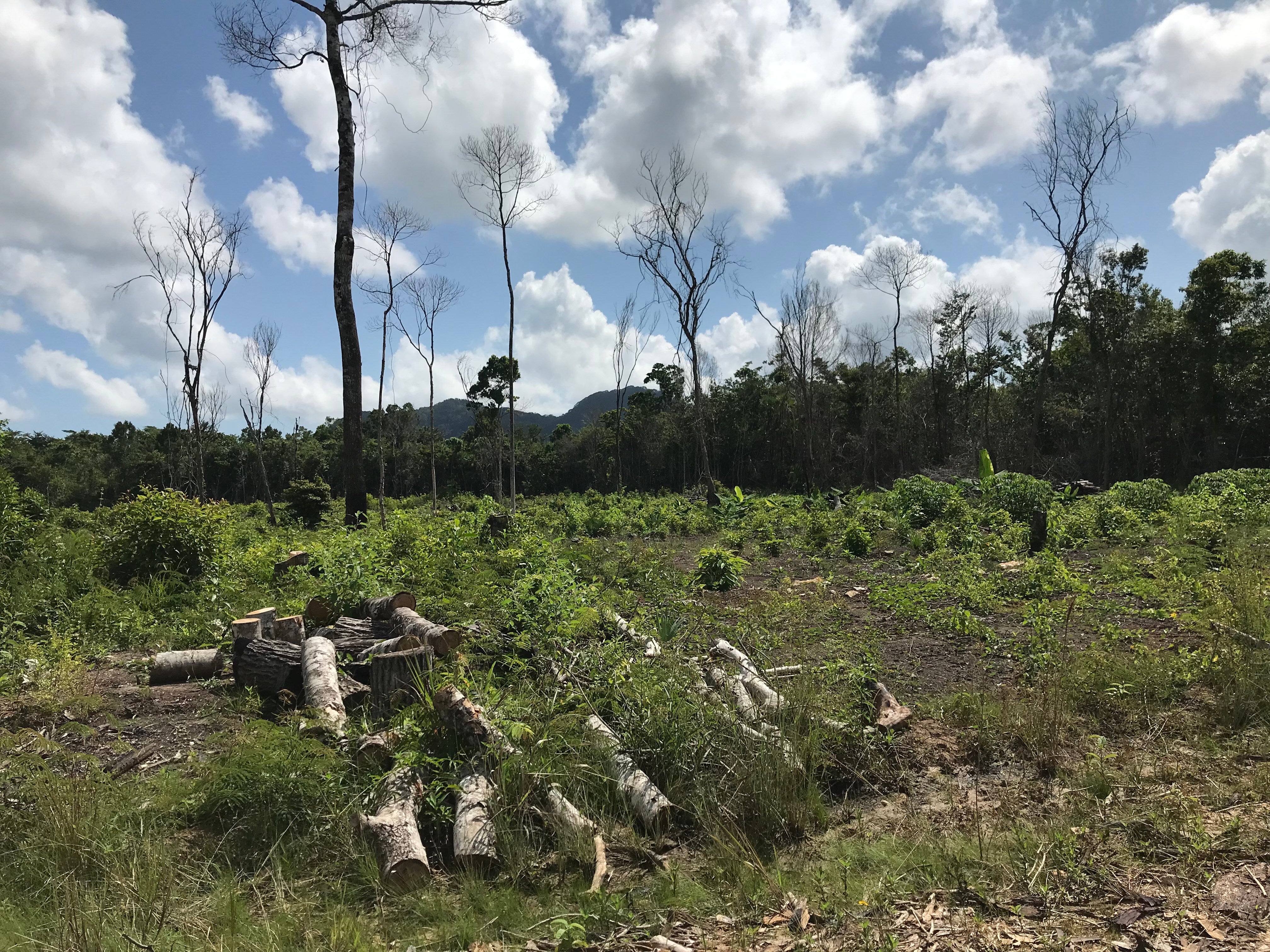 Example of land clearing as a way of laying claims or protecting ownership because outsiders are increasingly threatening to take away traditional lands.

One way to do this would be by strengthening institutional and legal frameworks related to conservation, anti-corruption, land-related laws, and above all the respect for the rule of law. In 2015, the Highest Appellate Court in Belize, the Caribbean Court of Justice (CCJ) rendered a landmark decision that affirmed the rights of the Maya Peoples of Southern Belize to their lands and territories.  The 2015 court order reaffirmed that the 38 Q’eqchi and Mopan Maya Indigenous communities of southern Belize have rights to the lands they have customarily used and occupied. The court affirmed that these traditional land rights constitute property equal in legitimacy to any other form of property under Belizean law. However, enacting this order remains a challenge: six years later, implementation efforts are moving too slowly and the government has shown a  lack of compliance under certain sections of the consent order.

Understanding that titling and protecting Indigenous stewardship of their lands is an urgent climate solution, the government of Belize has an opportunity to demonstrate leadership on climate change by complying with its court mandate to provide justice in formally titling lands used and occupied by Maya Peoples. Lands used and occupied by Indigenous Peoples in the southern part of Belize remain one of the most forested areas of the country. The Sarstoon-Temash National Park, a mix of broadleaf, wetland, and mangrove forest, which sits on ancestral Indigenous territory contains a rich biodiversity of birds, mammals, reptiles, and fish and insects endemic to the region, and includes certified Ramsar wetlands and undisturbed red mangrove forests, crucial sinks for carbon. Indigenous villages included within the lands titled under the Caribbean Court of Justice order act as essential buffer zones to protect these lands.

However, Belize’s lack of respect for the rule of law by its failure to quickly and fully implement court-mandated land rights, coupled with outdated land policies, has a direct negative impact on the environment and Indigenous communities. Securing land tenure and land security or the lack thereof undeniably contributes to deforestation. Deforestation results in the loss of habitat for animals, plants, and biodiversity as a whole. It also causes soil erosion and flooding all of which has a direct impact on Indigenous Peoples’ ability to grow and manage their own food systems, hunt, gather cultural significant materials in the forest to support their livelihoods and sustenance, as their ways of being are intimately intertwined with the biodiversity that surrounds them. For the climate, it means an increase in greenhouse gases. If Indigenous communities are not able to access food, their very existence is at stake. Because forested land is often assumed to be unclaimed land, increasingly community members in Belize feel pressure to clear lands in the hopes that by doing so they can protect their claims. For instance, in my Indigenous community of Laguna, some community members have been forced to clear land because a neighboring non-native village is encroaching on their collective lands, claiming that the government of Belize gave them permission through leases to occupy portions of the collective lands owned by Laguna. A minority of community members feel that if they clear the land, the outsiders will not occupy those lands. Thankfully, the majority feels that land is to be used responsibly, clearing only when necessary, and allowing areas to lay fallow. In the case of non-native communities in Belize, lands are often leased from the government. However, with lands leased from the government, the policy is that forested areas must be “developed” or face the risk of leases being revoked. This undoubtedly is a big motivation for those leasing land to clearcut the land or else be seen as anti-development.

Simple policy changes related to the definition of “development” in respect of leased lands, along with good faith implementation of the affirmed rights of the Maya people in southern Belize to their collective rights to their territories would be an encouraging and meaningful way for Belize to illustrate that it is serious about mitigating its effects on climate change. Paragraph four of the consent order requires it to keep third parties from interfering with the use and enjoyment of these lands and in so doing clearing would not be necessary as in the case of people clearing land in the hopes of protecting it. Despite these challenges, Maya managed areas remain the most intact and forested. Again, it is imperative to note that when Indigenous Peoples have rights to their lands, they use and occupy these lands in ways that prevent fossil fuel extraction, maintain carbon-capturing forests, ensure soil regeneration and overall protect biodiversity. 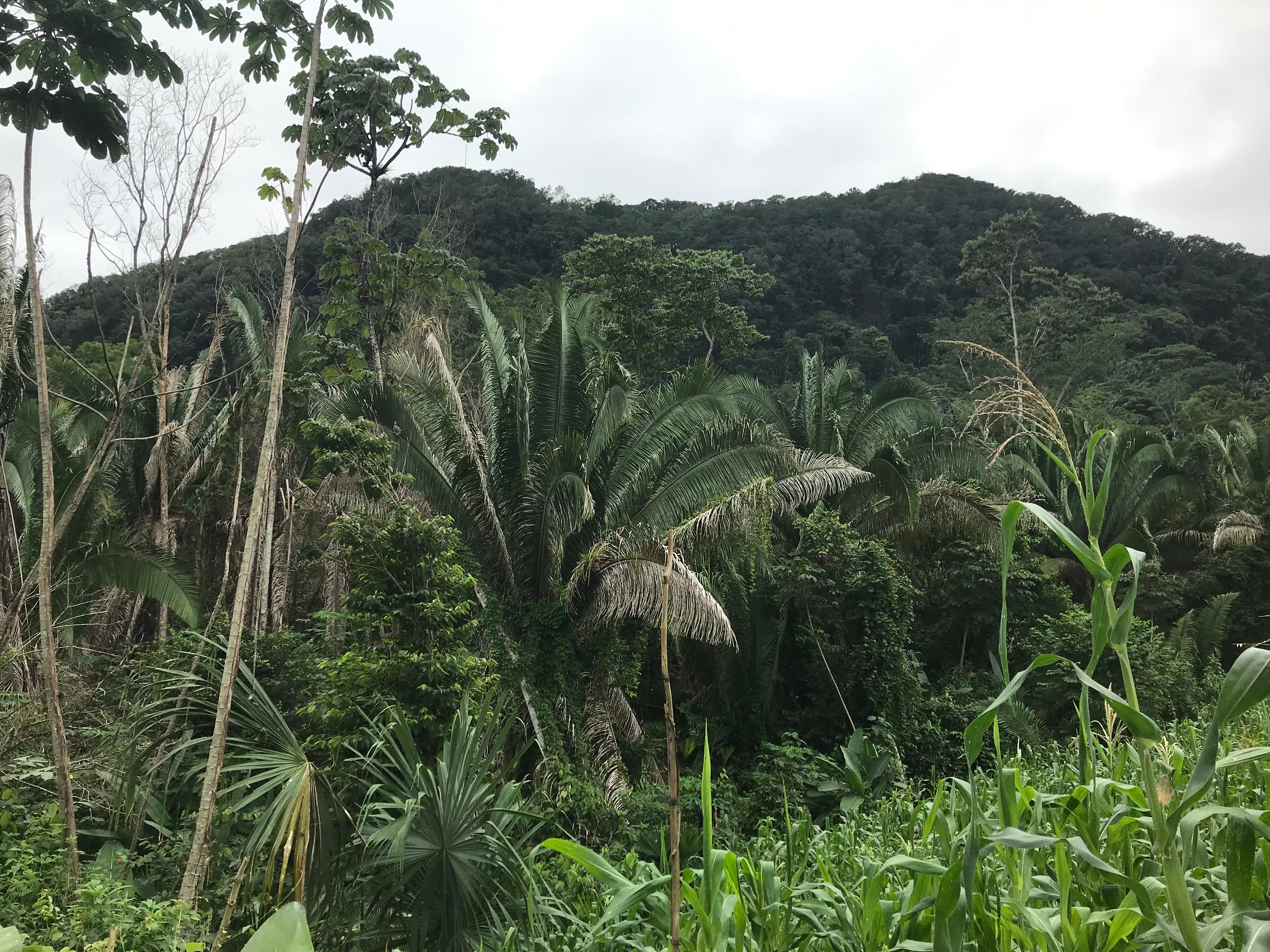 If Belize and the global community are serious about effectively combating climate change, then they should recognize that management of traditional lands and territories by Indigenous Peoples provides climate and conservation benefits for all living things.  In his address before the UN General Assembly recently, the Prime Minister of Belize acknowledged that “Climate change is real…Mother Nature is rebelling and that we can do better.”  He is correct and Belize can start by implementing the Maya land rights order with much haste, and goodwill. Belize must implement Maya land rights order with haste and strengthen conservation efforts in a meaningful way if it is truly determined about combating climate change as it says it is. Furthermore, there are many opportunities global leaders can begin to implement to support Indigenous leadership, stewardship, and land tenure. For example, member states, local and municipal governments, private companies, and other institutions should adopt and operationalize the United Nations Declaration on the Rights of Indigenous Peoples (UNDRIP). Applying a rights-based approach following the principles of Free, Prior and Informed Consent (FPIC) and self-determination are essential to mitigating climate change and securing Indigenous land tenure.

Indigenous Peoples are on the frontlines of climate change because they are the most marginalized and discriminated against. Indigenous Peoples are the best experts of their environments because they hold millennial-old knowledge of how to care for all living things in their territories. As we look to the future, Indigenous rights, stewardship, and land tenure must be recognized, resourced, and respected. Through more Indigenous leadership and land management will bring biodiversity protection, reduction in CO2 emissions, and an enhancement in natural carbon removal. If the global community is committed to successfully fighting climate change, then it must include the voices and participation of Indigenous Peoples.

All photos by Monica Coc Magnusson.