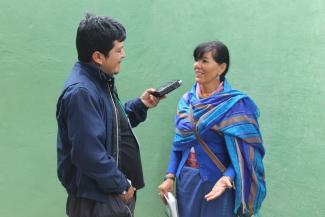 Indigenous media professionals and amateurs from all across the Americas met at the Second Continental Summit on Indigenous Communication in Santa María Tlahuitoltepec, Oaxaca, Mexico from October 7–13, 2013. Participants representing various forms of Indigenous media, including newspapers, radio, and television, convened to contribute to the strategic strengthening of communication processes of Indigenous Peoples of Abya Yala (the Americas), within a framework of exchange, dialogue, reflection, and proposals.

As a radio producer myself, I am extremely committed to publicizing the struggles of Indigenous groups globally. I gathered a lot of information at the Summit that will be disseminated through my community’s radio station in Sumpango, Sacatepéquez, Guatemala. I am convinced that it is difficult to manipulate and persuade a well-informed community. Therefore, we, as communicators, give voice to those whose voices have been denied. In this way we strengthen and empower our communities. It is necessary for Indigenous Peoples to be heard.

In the working group on Indigenous communication in defense of Indigenous Peoples’ territories and common goods, Agustín Arellano (Bolivia) reminded us about the importance of communication in reconstructing a new history for a humanity that lives in peace and equality, and Gonzalo Escobar (Colombia) reflected on the fact that not all development results in peace. This working group benefited from the participation of men, women, and youth, including the warmly received Maya Sofía, a young girl from Colombia who shared the work that she is doing with the support of her parents. She shared a video, which received a national prize in Colombia, dedicated to the culture of her community and the importance of promoting her people’s language and ways of being. Sofía said, “Children are important to our communities, so we must grow up with a way of thinking and a vision. When I grow up, I want to be a leader in my community so I can help my people.”

Thus emerged the importance of communication in Indigenous communities. Communication has as its goal the survival of Indigenous Peoples and the empowerment of communities with new forms of technology to express the needs, challenges, and advances of each community. All of this takes place within the context of Indigenous territory, a concept that includes more than just physical territory, but also the Indigenous cosmovision, or worldview. As Indigenous people, we only make use of our freedom of expression with the aim of promoting our well-being, strengthening our cultures, using our languages, and encouraging the participation of women in different spaces for community development.

This differentiates us from corporate media and conglomerates, whose sole goals are business and the bottom line. In the afternoons of October 9 and 11, workshop topics included the importance of organization; legislation on the media, land, and territory; and videoconferencing. Susana Pacaratoco (Bolivia), facilitating the workshop on “The Importance of Communication,” presented on how community organizing has been fundamental to her work as a woman, a mother, a radio announcer, and an activist in her community for over 20 ears, where she has participated in everything from peaceful marches to hunger strikes all in the name of defending her people’s land and territory. She shared a short history of her life to demonstrate the importance of organizing at both the individual and the collective levels in efforts to achieve development in communities. Pacaratoco said, “We must defend land and territory for our well-being; not even a bug can live without land and territory.

To achieve this, the heart and the mind must join together.” She added that women today must overcome the obstacle of machismo to participate and involve ourselves in community activities. “We must do this to forge communities of peace for our children and grandchildren. And we must not forget that in order to organize well, we need transparency, respect, and truth.” Toward the end of the Summit, the staff of Radio Ixchel from Sumpango, Sacatepequez, Guatemala, and Cultural Survival had the opportunity to address the community of Santa María Tlahuitoltepec via the microphones of its community radio station, Radio Jenpoj. In that space, we were able to share information about the current status of legislation on community radio in Guatemala, as well as general information about the work that Radio Ixchel does. We offered an outline of the station’s history in its community, including its successes and its failures. We also talked about the work that Cultural Survival does to support the strengthening and growth of community radio in Guatemala and to disseminate information about Indigenous Peoples’ right to Free, Prior and Informed Consent in defending their lands and territories. Cultural Survival does this work as a nonprofit with the goal of providing accurate information to Indigenous Peoples about this right.

The Summit opened not only my eyes but also those of the other participants to the myriad Indigenous cultures represented. It was full of cultural activities from beginning to end, performed by musicians, dancers, singers, composers, and artisans from diverse communities. We all gained a greater understanding of the cultures of Santa María Tlahuitoltepec, Oaxaca, and other states in Mexico, and developed a sense of harmonious coexistence and exchange among the participants.

Most important, we left the Summit with a renewed sense of commitment to continue defending our lands and territories by building movements within our communities. Indigenous communicators must enrich, strengthen, and build capacity within these movements, working with the knowledge that we have rights and we need to use them.

Article 16 of the UN Declaration on the Rights of Indigenous Peoples guarantees that:
1. Indigenous Peoples have the right to establish their own media in their own languages and to have access to all forms of non-indigenous media without discrimination.
2. States shall take effective measures to ensure that State-owned media duly reflect Indigenous cultural diversity. States, without prejudice to ensuring full freedom of expression, should encourage privately owned media to adequately reflect Indigenous cultural diversity.