Spinning the Web of a Spider 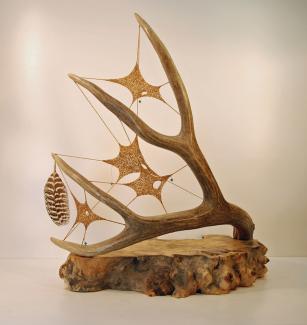 Come to a Cultural Survival Bazaar and you will immediately spot Lenny Novak’s booth. The neutral tones of his antler and hide sculptures are in sharp contrast to the colorful booths that surround his. For the past 20 years, Lenny has been constructing, deconstructing and reinventing what has become a pan-Indian form: the dream catcher.

Like many Native people on the East coast, Lenny’s Algonquin and Abenaki heritage was kept from him. He recalls growing up in Exeter, New Hampshire: “My father’s father was Polish, but my mother’s mother and my father’s mother had Native blood on both sides of the family. [This fact] was not spoken [about] because of the times. They [my mother’s family] did not openly identify as Native to avoid discrimination. It was better to be black in America than Indian after Custer. When I was old enough to be conscious of my heritage, all the elders in my family were gone.”
“In school, because I was big,” he says “they thought I was dumb. They put me in a slow group because I was more interested in what was going on outside with the birds and the trees. Real classroom education did not interest me unless the teacher was fun. It was not stupidity, it was the fact they were not reaching me.”
A few teachers did inspire him by asking the right questions and one put Lenny on his current path. His woodshop teacher believed that if you did not have something, you simply made it yourself. “He showed me I had the ability to do what I wanted to do,” says Lenny. “I would see things that interested me and I would figure out how to recreate them and make them my own, it’s a part of who I am.”
Lenny recalls a magnificent annual powwow in Haddam, Connecticut that he attended. Artist Dale Carsen had grapevine and fishing line dream catchers. “I bought one and when I got home I decided to try to make one. I started with a web because I did it the way I thought it was [supposed to be done]. It was the way I envisioned it, but it came out different than the original. That was 20 years ago and since then, it has evolved and [I have] refined it from a much bigger web to what it is today—really tight.”
“Once I realized antler was my medium, I started to do what I do now. It has been a process of exploration. My works comes to be when I see a really neat antler and I like the way it is configured and can do a web in between it. It was an accident to be honest.”
“My web went from hoops to this intricate web and I hope to have taken the form to a higher plane; I hope it is more of an art form. The process is equally as important. I still try to keep with tradition by drilling holes in four directions, and fill in from there. When I do cross sections, I do North, South, East and West first. Now, I also do five point star forms and it has become more of a sculpture. Some say there is a perfect balance of positive and negative space. It has taken 25 years for me to get to where I am right now artistically.” He laughs, “Up until five or six years ago I never considered myself a real artist. I just thought I had too much time on my hands. It has been an amazing journey. It’s a constant work in progress.”
Lenny’s art work can be seen in the Abbe Museum in Bar Harbor, Maine, in the Mt. Kearsarge Indian Museum in Warner, New Hampshire, and at Cultural Survival Bazaars.