Of Sound and Screen: A Native Music/Multimedia Collaboration is the Hit of 2019’s Whitney Biennial 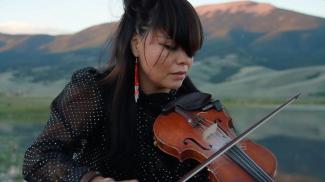 The Whitney Museum, among the world’s preeminent  spaces for contemporary art, is especially known for its bar-setting Biennial show, which presents an eclectic and carefully curated selection of artists and works it anoints as particularly impactful, of the moment, and likely to lead larger, transformative conversations. To be selected is often a career-making opportunity, putting one in the spotlight not only for the discerning audiences of New York, but also key institutions and collectors around the globe. An unprecedented 8 out of 75 featured artists for the 2019 Biennial are Indigenous.

Musician, composer, and performing artist Laura Ortman (White Mountain Apache) was a clear standout among this year’s group, singled out for particular praise among the most influential art critics with her video installation entitled My Soul Remainer, complimented by a live summer solstice performance—a true sensory experience. The video, directed by Nanobah Becker (Diné) and featuring renowned ballet dancer Jock Soto (Diné/Puerto Rican), longtime friends and collaborators of Ortman’s, captured one of her signature violin performances, a work of exquisite, ethereal beauty which not only transports the audience to different environments in the natural world onscreen, but also evokes an almost other-worldly realm of feeling in sound. Long embraced within the Native arts, music, and film communities in the U.S. and Canada, this engagement at The Whitney presents a fortuitous occasion for these artists’ work to be appreciated even more expansively, on the international stage. Cristina Verán spoke with Ortman and Becker about the experience.

Cristina Verán: Laura, tell us a bit about how your work got on the museum’s radar.
Laura Ortman: In terms of my music, the Biennial is my first full-on solo show at The Whitney. However, it’s actually my fourth time performing there. The first experience was as part of the “Words for Water” show in March of 2017, organized by Natalie Diaz and Jennifer Foerster. That was followed in 2018 by a group show called “The New Red Order: The Savage Philosophy of Endless Acknowledgement,” and then as part of Demian Dinéyazhi’s “An Infected Sunset.”

CV: Being featured alone on stage is a sign of the museum’s special interest in you. How did that happen?
LO: Last November, after I’d gotten back from New Mexico to New York, the curators Jane Panetta and Rujeko Hockley contacted me to arrange a studio visit. We talked about my music and my whole process for a long while. They asked if I had some work that I’d be interested in showing them, and so I shared the video, My Soul Remainer, which Nanobah directed. Less than a week later, they invited me to not only perform live during the Biennial, but also asked to feature this video in the show, loud and proud!

Laura Ortman and Nanobah Becker in a photo booth inside The Whitney Museum.

CV: Nanobah, how did this ongoing creative collaboration begin, and what is your role within it?
Nanobah Becker: Laura and I first met in New York back around 2002 at the screening of a film that she’d done a live score to—Redskin (1929, Victor Schertzinger). At the time, I was a film student and an intern at the National Museum of the American Indian. We met Jock Soto some years later, when his biographical doc Water Flowing Together (2007, Gwendolen Cates) screened at Native Cinema Showcase in Santa Fe. He’s the one who actually inspired us to collaborate—and it’s really all three of us: Laura, me, and Jock, each bringing something of our own skills and ideas to the collective. My training, for example, is as a narrative filmmaker and storyteller.

LO: I’d put it like this: Nanobah has the vision, Jock has the movement, and I have the sound—uniting to make something unique; high art.

CV: How did you come to see your music as linked or, rather, linkable to other kinds of art-making?
LO: I’ve played the violin since I was seven years old. Later, when I was in school getting my BFA, I got into making performance and installation art and would incorporate music into soundtracks for those projects. Eventually I began to think of my music as making art out of sound—or what I call sound-sculpting, creating environments. For me, music and music-centered performance art are both about creating atmospheres.

CV: What do you mean exactly, and how is that achieved?
LO: Like customizing the recording of my music in places with, say, natural reverb or super-duper dry acoustics; offering some kind of background noise-bleed or incidental sound occurrences; in stairwells, in fields, in natural canyons, noisy places outdoors, etc. In my live performances, I take audiences to a place, a visualization—but one that is unnamed; abstract. I have a song that’s about shifting icebergs, one about my lost shadow . . . .

NB: Laura’s song, “I Lost My Shadow” includes subway sounds, for example. So, in the video we made for it, I chose to actually shoot on the train that goes over the Williamsburg Bridge, from Brooklyn into Manhattan, and asked Jock to dance on that subway as well. Next came My Soul Remainer, our second video, which we shot on a mountain in New Mexico. It was a real contrast to the urban scape of the first one, particularly in how the views of nature onscreen respond to Laura’s music.

CV: Are these two videos linked or otherwise intended to be part of a continuing series?
NB: To me, Laura and Jock are portraying sort of the same characters in both videos. There is a story that links them to one another, informed by the tone of each song, although I don’t think it really formed until we got to the editing stage.

Now we want to do one more to make it a trilogy of videos that offers some sort of resolution for their characters. Jock picked the songs for the first two videos and I think he’s already chosen the third. I’ll need to listen to it over and over to then get visual ideas.

CV: What challenges did you have to work through to render your original ideas on video?
NB: Well, the biggest one was that we had, like, no money! We had to borrow the equipment and then shoot the footage as quickly as possible. Fortunately, there were a few other talented people who believed in us and became involved as well—cinematographers like Smokey Nelson, who worked on the first film, and then Blackhorse Lowe with the second. Their own artistic eyes really offered a lot to those projects.

CV: You’re both influential in “Native Creatives” circles. Given that Indigenous artists oftentimes choose to create or represent a theme, a vibe, or an aesthetic that represents some aspect of their heritage, is that true in your collaborations, or your own work?
NB: My Diné culture traditionally represents a duality, as opposed to a patriarchal system. For these videos, I thought a lot about duality throughout their production. Laura and Jock’s characters, in my mind, are sort of the yin and yang to one another; they wear the same makeup and nail polish as well. I remember my niece, when she was very young, watched the video and asked about Jock, “Is that a man or a woman?” And I said, “exactly!”


CV: You’ve both been part of and presented at key arts convenings—particularly the Sundance and ImagineNative film festivals. How have those venues contributed to your artistic development?
NB: I was a Sundance Native Program participant years back. Through that, I had met Danis Goulet, a film selector from ImagineNative. She programmed Flat, my first short film, for the festival, which I found to be such a dynamic, supportive, and progressive environment; something I’d never really experienced before. Through ImagineNative I’ve met so many other wonderful (especially Canadian) Native filmmakers,who have since become part of my network. It’s amazing to be part of this international Indigenous filmmaking community.

LO: In 2011, Nanobah and I were honored to receive the Best Music Video award at ImagineNative for I Lost My Shadow.

CV: Where do you each call home these days? Have you shared your videos with the community?
LO: I’m based in New York, where I’ve lived for many years—New York was my school! I haven’t shown my work back home, on the rez, yet.

NB: I live in L.A., though I’m on my reservation at the moment. I’ve previously shown some of my videos here, and earlier this year, I filmed the annual Diné Pride celebration, which I’m now figuring out how to develop into a larger project.

CV: When will audiences get to see a concluding chapter of the trilogy, to follow I Lost My Shadow
and My Soul Remainer?
LO: We’re still figuring things out. Usually we wait for the moment when we can all gather together in one place, and then it’s go-go-go!

— Cristina Verán is an international Indigenous Peoples issues specialist consultant, researcher, strategist, educator, editor, and multimedia producer. Her work focuses on the intersections of human rights, political engagement, the arts, and community development. She is a longtime UN correspondent and was a founding member of the UN Indigenous Media Network.

Photo: Laura Ortman with her violin. Still-image from My Soul Remainer video.