Skip to main content
44-3: Back to Our Roots: Indigenous Food Solutions

From Soil to Sky: Mending the Circle of Our Native Food Systems 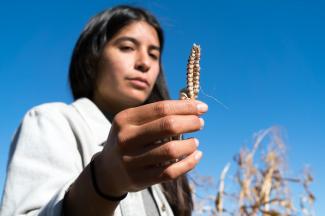 At an autumn Learning Lodge in Coast Miwok, Southern Pomo Territory, Elder Leroy Little Bear (Blackfeet) shared with us a powerful teaching: as Native Peoples, “we find our cultural resilience in the medicine of the land.” As a place-based, Indigenous-led intertribal organization, The Cultural Conservancy takes this teaching to heart. It is a reminder that when things are difficult, we can look to the medicines of the land to strengthen us, and in times of disease or hunger, they are our blessings. Food is medicine. So how do we, as Native communities, best cultivate the medicines of the land and honor the resilience of our cultures?

Here in Coast Miwok Territory on the flanks of Mount Tamalpais in mid-summer, many medicines are revealing themselves: bay nuts, acorns, thimbleberries, manzanita, and madrone berries are all ripening with the long days and summer heat. We recognize the Native foods of this land and the First Peoples who have millennia-long relations with these plant and animal relatives, which they harvest for food, medicine, craft, tools, and historically, most of their material culture. While the Coast Miwok and Southern Pomo (represented by the sovereign nation of the Federated Indians of Graton Rancheria) have the first rights to harvest and utilize these medicines, many of these Native foods are locked up on private property or protected areas where harvesting rights are off limits. 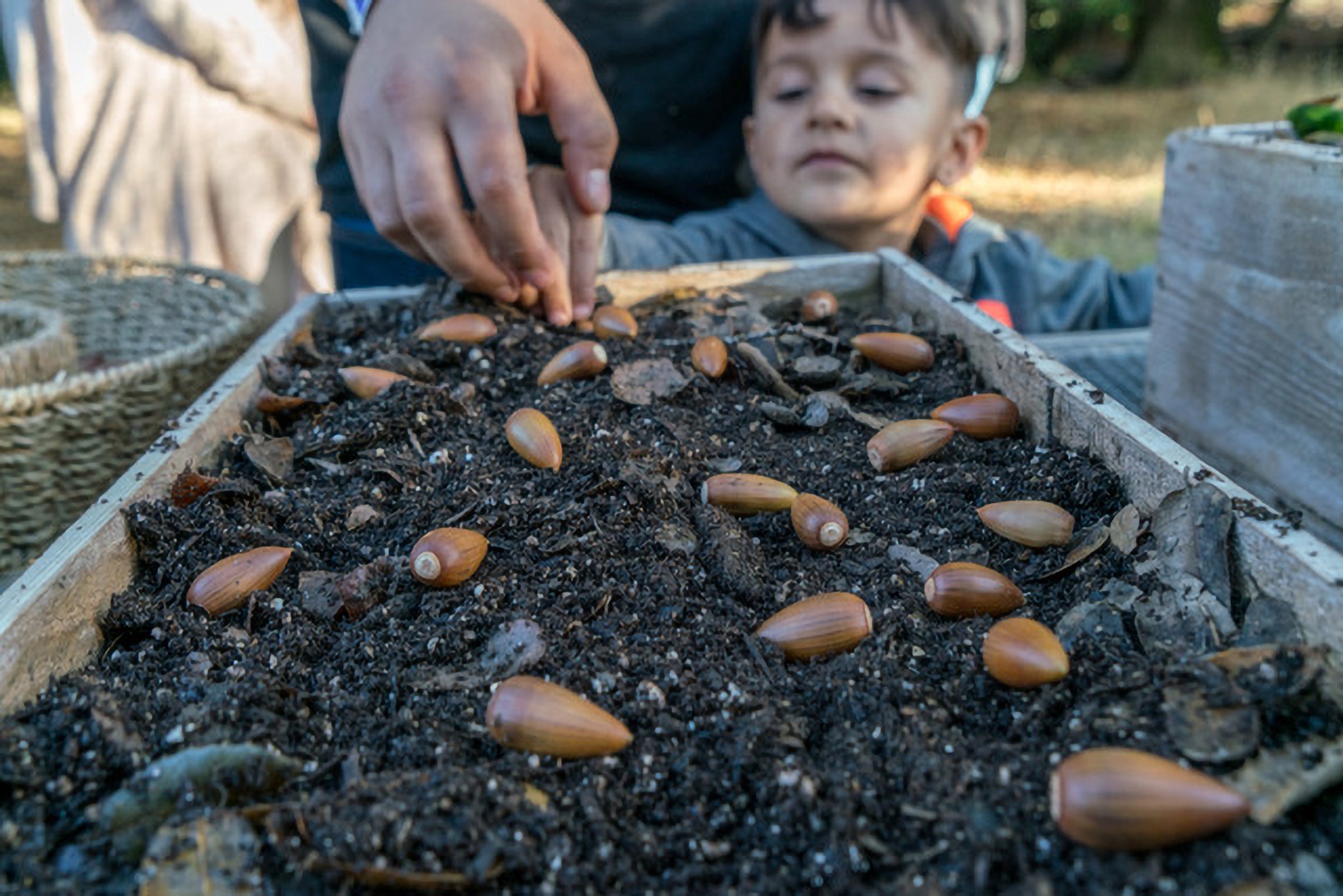 Thanks to the global Indigenous movement and national struggles and victories like Standing Rock, the Buffalo Treaty, the recent recognition of Muscogee Creek land rights in Oklahoma, mascot name changes, and the Black Lives Matter movement (to name a few), there is a growing awareness in mainstream society about the importance of respecting the sovereignty of Native Americans and their lands. For Indigenous Peoples the world over, the right to our lands and foods is primary. Food sovereignty is political and cultural, nutritional, and cosmological. It is about honoring the Indigenous foods that give us life—whether plants, animals, fungi, salt, or other place-based gifts from the land. As we have learned from relatives David and Wendy Bray (Seneca), the Haudenosaunee calls these foods “our life sustainers.”

The Cultural Conservancy has been supporting and advocating for Food Sovereignty since we supported the restoration of a Victory Garden in the Presidio National Park with native seeds in the late 1990s, followed by our participation in a historic Native American delegation to Slow Food Terra Madre in 2006, and through urban gardens, workshops, and cultural demonstrations with intertribal and global Indigenous communities over the past 25 years. The Cultural Conservancy supports Indigenous food sovereignty through local farms, a growing Native Foodways Program, national and international networks, a podcast series, and global grantmaking. Our long term commitment is to mend the circle of Indigenous health and wellness through the revitalization of Native agriculture and foodways, from seed to plate, soil to sky, song to recipe, and ancestors to future generations. 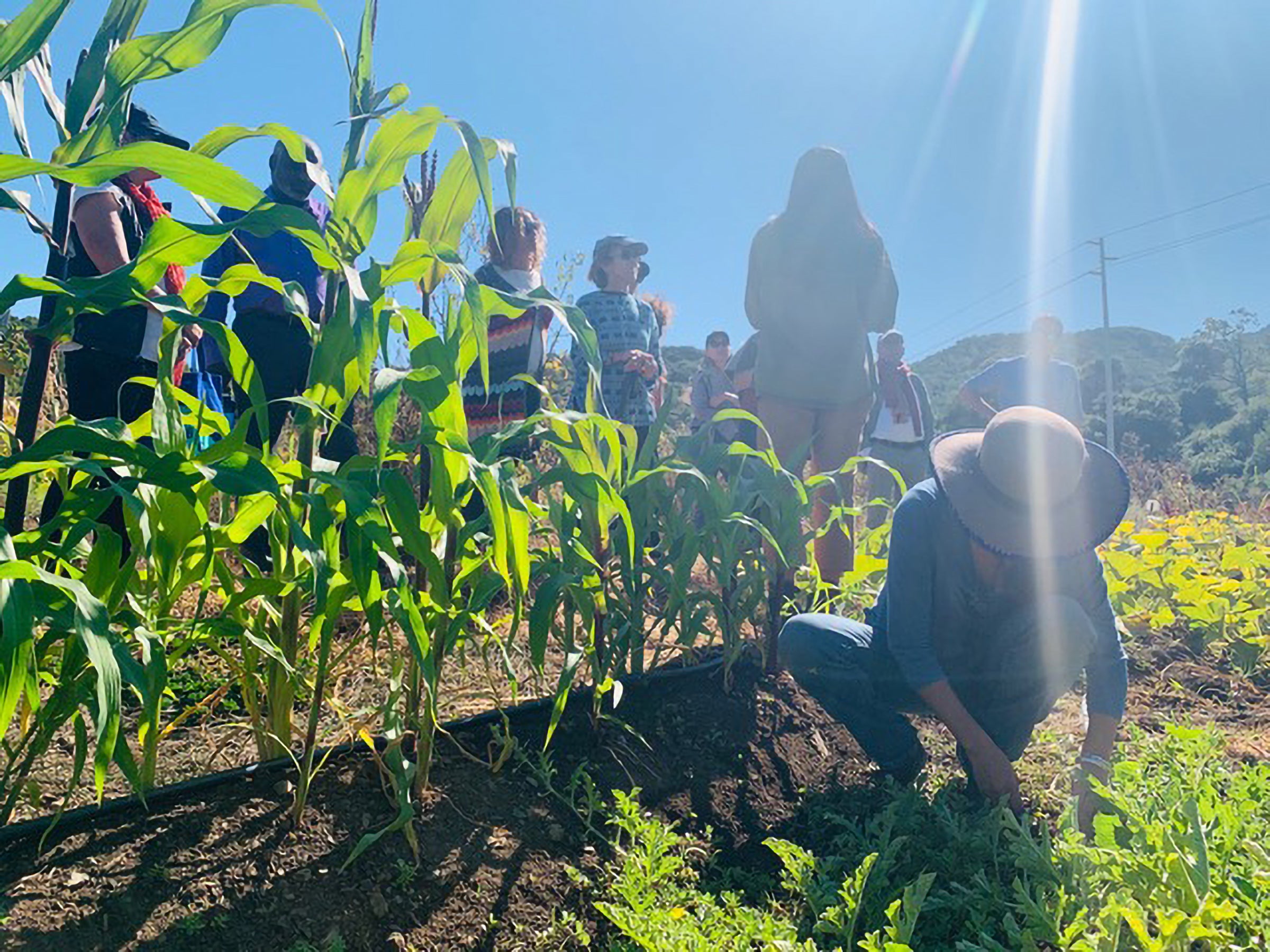 Local Farms
Today, we are grateful to be a partner at the Indian Valley Organic Farm and Garden at the College of Marin in Novato, California, where we have grown a large variety of heirloom Native foods since 2012. We were originally invited to become a farm partner by one of the farm’s founders, Wendy Johnson, a Zen farmer and educator. We uplift this invitation as an important example of the kind of land rematriation work that needs to happen more—a non-Indigenous managed farm prioritizing sharing space and turning over fertile land to Native Food Sovereignty work. On less than half an acre, we grow native foods and medicines, save rare heirloom seeds, and revitalize California native plants, improving local Native communities’ access to the land, food, and seeds that foster deeper connections to cultural traditions.


From origin stories to family histories, each resilient seed we grow at the farm has an ancestral story to tell. We are guided by the seed-keepers before us whose stewardship cared for the seeds, such as the Bray Family from Seneca Nation, who gifted us the responsibility to take care of Onëo-gen, the sacred eight-row Seneca white corn that we have been growing for more than seven years. This year, our fields are full of Chimayo chile peppers, Lakota squash, Hopi purple beans, Tohono O’odham tepary beans, Cherokee purple tomatoes, and many more heirloom varieties from Native communities across Turtle Island, each carrying thousands of years of knowledge and story. 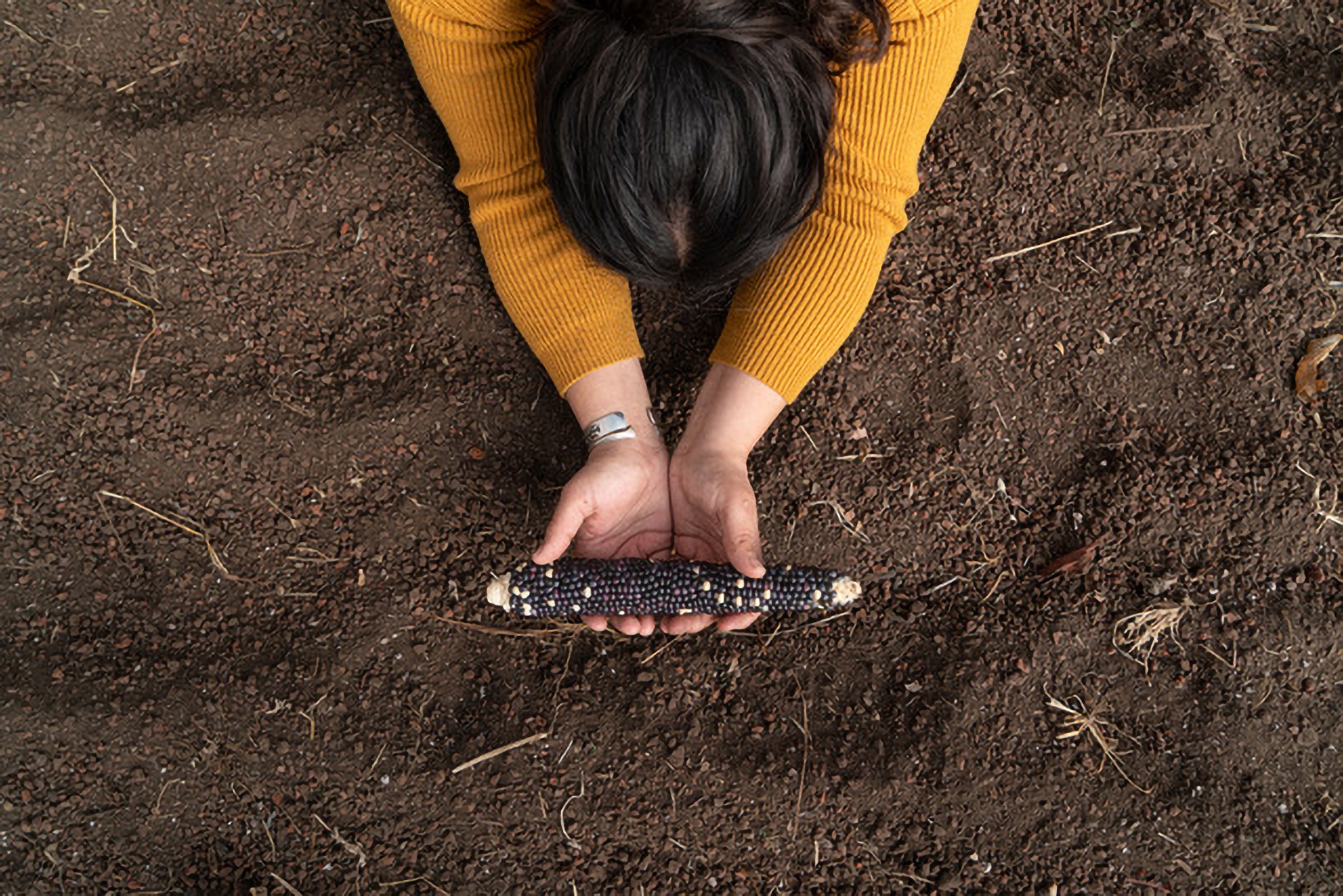 The Cultural Conservancy’s Foodways Program
The farm in Marin County is stewarded by our Native Foodways Program, a 12-year-old program that supports the Food Sovereignty of the Bay Area Native community through the revitalization of traditional Native foodways. From Indigenous agriculture to cultural land stewardship, we support a spiritual and reciprocal relationship to ancestral lands. This is especially needed in the Bay Area, where intertribal urban communities and displaced California Indian Peoples have been economically, politically, and culturally dispossessed of ancestral land and place-based traditions.


By providing community access to our farm and the foods it produces, our work mends the broken circle of traditional lifeways by offering opportunities for Native communities to reconnect with their ancestral knowledge systems, practices, foods, and seeds. Our programming includes a robust food distribution program, a Native seed library, Native youth internships and apprenticeships, educational events, workshops, and demonstrations on Indigenous agriculture, Traditional Ecological Knowledge, Native sciences, and more. This work ultimately aims to heal historical trauma and return physical, mental, and spiritual health to Native community—all based in loving, reciprocal relationships with the land and her many gifts.


Branching Out
Food is a community endeavor. To cultivate and feast good food, we need community: farmers, seed-keepers, fishers, gatherers, knowledge holders, chefs, basketweavers, hunters, and more. We are grateful to be part of the Native American food movement through a series of networks and have supported the creation of the Slow Food Turtle Island Association. After years of informal networking and collaboration with each other and the Slow Food movement, Winona LaDuke (Anishinaabe) spearheaded this effort to bring us together in a historic meeting in Taos, New Mexico in 2016 to formalize our Native American food network. We are organized as an association directly linked to Slow Food International in Bra, Italy. Slow Food Turtle Island Association represents diverse intertribal communities in the U.S. and Canada concerned with health and well being, land use and farming, food policy, and the protection and revitalization of rare, heirloom food varieties and associated cultural practices. The Slow Food Turtle Island Association supports the general ethos of Slow Food to promote good, clean, fair food for all, with a focus on the First Foods of the Native Peoples of Turtle Island.


The Slow Food Turtle Island Association is also linked directly to the Indigenous Terra Madre Network, which defines itself as a network of Indigenous communities, partners, and organizations. It was born out of the wider Terra Madre network to bring Indigenous Peoples’ voices to the forefront of the debate on food and culture, to institutionalize Indigenous Peoples’ participation in the Slow Food movement and its projects, as well as to develop both regional and global networks. There have been three Indigenous Terra Madre global conferences, with the last one hosted by the Ainu of Japan in Hokkaido in the fall of 2019.


Nationally, we are also honored to collaborate with the Native American Food Sovereignty Alliance and its Indigenous Seed Keepers Network, led by the dynamic Rowen White (Mohawk). Together, we document rare seeds and seed rematriation work and produce short videos about protecting and sharing heirloom Indigenous seeds and plants. Similarly, we have collaborated with Braiding the Sacred, a hemispheric network focused on Indigenous corn growers working to preserve and perpetuate traditional varieties of sacred corn. 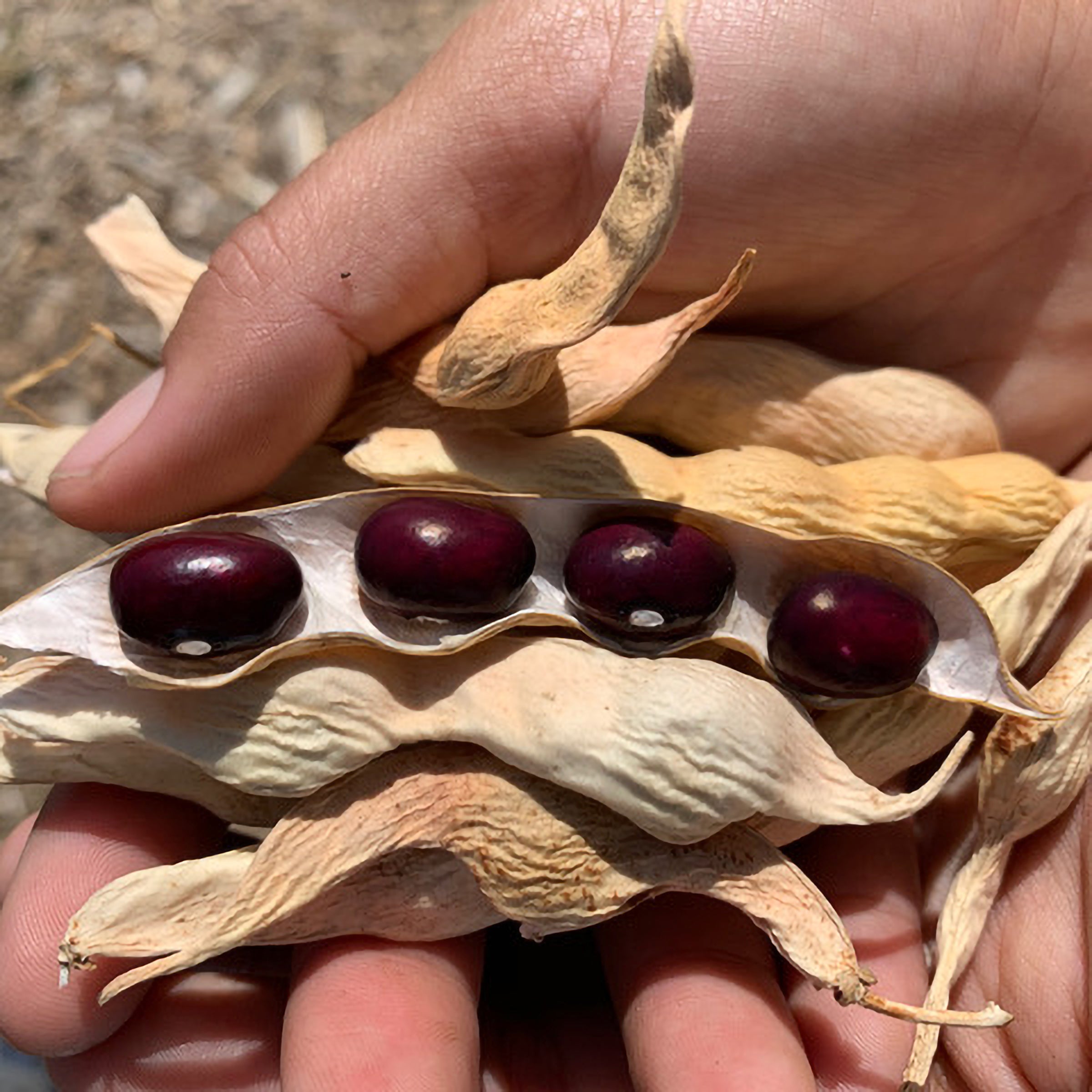 The Native Seed Pod
The Cultural Conservancy sees a direct link between Food Sovereignty and Indigenous media, as we are traditional storytellers and artists who love to share the beauty, sights, sounds, and stories of our Indigenous foods in embodied ways. Audio and video recordings are powerful mediums through which we tell our stories, share our work locally and globally, decolonize media, and animate our Indigenous voices. To recognize the extraordinary wisdom and Traditional Ecological Knowledge of Indigenous farmers and food activists, we started the Native Seed Pod podcast series in 2018 to serve as “an antidote to the monoculture.” Sixteen episodes (and counting) of in-depth conversations with hunters, farmers, seed-keepers, chefs, and more can be found at nativeseedpod.org.


Sharing Good Water: The Mino-Niibi Fund
The Cultural Conservancy’s Mino-Niibi (“good water” in Ojibwe) Fund for Indigenous Cultures provides small grants through re-granting to Indigenous-led organizations in Turtle Island, Abya Yala (Central and South America), and Moananuiakea (Pacific Oceania). We support grassroots Native organizations working to revitalize their cultures, traditions, lands and livelihoods, most of whom are concerned with Food Sovereignty given climate disruptions and other uncertainties. To address these concerns, we have supported Aymara quinoa growers’ agrobiodiversity projects on Lake Titicaca in Bolivia; Maya corn farmers in Guatemala; cultural exchanges between Pueblo, Mayan, and Zapotec youth learning about traditional agriculture; Hawaiian orchard stewards and traditional fishermen on Big Island; and young Inuit hunters in Nunavut.

The Cultural Conservancy’s Native basket of food projects extend from the local to the global, from the wild to the cultivated, from individuals to networks, and from kitchens to soundwaves. We strive to enact Indigenous food justice and cultivate health and well being at many levels. By weaving traditional foods and cultural foodways into all of our programs and activities, we elevate the medicines of the land and our sacred responsibility to protect and care for them.