Silvia Carrera: A Symbol of Dignity for Indigenous Women in Panama 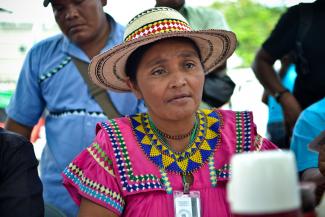 The Ngöbe-Buglé comarca (Indigenous administrative region), located in western Panama, is the largest of five Indigenous regions of this Central American country. It is home to great wealth, both in mineral (copper) and biotic resources; however, its Indigenous population lives in poverty and isolation in the absence of adequate state accountability, allowing for the highest infant mortality rate (55.4%) in the country. To tackle these percentages and advocate for the rights of her people, the Ngöbe-Buglé cacique general (chief) Silvia Carrera, has assumed an uncompromising role in negotiating with the Panamanian government.

Originally from Cerro Pelado in the Ñürum district of the Ngöbe-Buglé comarca, Carrera is 42 years old, and has two sons. After announcing her candidacy for cacique, Carrera traveled around the mountainous region for months, making herself known and trusted in the widely dispersed Ngöbe communities. At a young age, she participated in their struggles, including those related to health care and education. On September 2011, she succeeded in becoming the first woman cacique of the Ngöbe. Her election as cacique was a milestone not only in the Ngöbe community, but in all of Latin America, where most political leadership positions are held by men. Silvia Carrera’s life story is one filled with both struggle and inspiration.

“I started working the land when I was 12 and my father taught me how to grow several varieties of crops. I planted manioc, yams, rice, beans, and corn to feed my children. These skills have been passed down from generation to generation. The Ngöbe-Buglé people have always lived off the land and this land gives us the resources to raise our children,” says Carrera. At the age of 12, she also joined the movement led by Camilo Ortega, a recognized leader of the Ngöbe in the Veraguas Province in the years before the existence of the comarca, which fought for the Ngöbe-Buglé’s right to autonomy. At 13, she gave birth to her first child, Bernardo Jiménez Carrera, and at 18, she gave birth to Sixto Jiménez Carrera. A year later, she separated from her husband, violating patriarchal traditions. Due to lack of financial resources she could not access formal schooling. Despite these challenges, Silvia learned to read and write.

On January 31, 2012, the Ngöbe began blocking the Pan-American Highway in an attempt to pressure the Panamanian government to prohibit copper mining and hydroelectric companies from entering the comarca. On February 5, police violence against thousands of Ngöbe protesters resulted in two deaths and many injured, forcing the government finally to negotiate. On February 7, Minister of Government Jorge Ricardo Fábrega, representing Panama, signed the San Lorenzo Accord, while Silvia Carrera, representing many of her people, signed alongside the minister. The accord recognizes the right of the Ngöbe people to make their own decisions about mining and development projects within the comarca. As in most political situations, not all Ngöbe supported Carrera’s decision to sign the agreement with the government as some claimed the agreement only prohibits mining and not hydroelectric dams.

From this tumultuous situation the figure of Silvia Carrera rose as a symbol of determination for the Ngöbe and all Panamanians. Carrera has awakened the admiration of most national and international observers. The media has portrayed her as an exceptional leader, making her the heroine for Panama’s people of humble origins. Many people are now asking her to run for public office in the Panamanian government. Throughout months of conversations with the Panamanian government, Carrera visited far-flung Ngöbe communities trying to facilitate unity and consensus for the needs of the entire Ngöbe population. At the same time, she communicated with mainstream Panamanian people, trying to bridge a nation of extreme contrasts. “We [Ngöbe] just want to reclaim our rights and justice. Most of all, we want to live in peace and tranquility.”

Carrera explains her responsibilities as cacique general, “As cacique general I’m the main authority of the comarca. I constantly communicate with the regional congress, the regional caciques, and the public. At the same time, I have to be the bridge between the national government and the comarca.” Carrera claims she was elected in 2011 because she consulted her people first. “It should not be always about promising and promising. I have always been humble and I couldn’t promise what I would not accomplish. I was always truthful with the objectives I wanted to accomplish,” she says. Ngöbe people face many uphill battles, one of which is access to quality education. Carrera says, “Many people in the region have very limited access to basic educational facilities. Students have a hard time trying to reach the education centers, walking in harsh conditions through the jungle and mountains; a walk to school can take up to five hours.” Panama’s fast growing economy goes hand-in-hand with the need for more electric power. According to Carrera, the Ngöbe-Buglé comarca would not benefit from the construction of a hydroelectric dam. She says, “In regards to the hydroelectric project, what’s happening is that the government is being unjust to the Ngöbe-Buglés. The government has a significant interest in this project because it is going to
obtain high profits from it while leaving nothing for us in the comarca.”

Carrera is adamant when she talks about strategies for dealing with an inflexible government: “Stand up for what you believe. Just having that strong determination can make other people join you in your struggle. This belief has made other people around the world with similar ideals and opinions support us.” Cultural Survival members have sent thousands of letters to President Martinelli, urging him to recognize the rights of the Ngöbe people. Carrera says that the letters are helping. When asked what she hopes to accomplish during her term as cacique general, Carrera says, “[In addition] to providing better education, access to healthcare is something that the community is lacking. Child mortality rates are extremely high and if someone is sick it takes four days by foot from some regions to reach the nearest healthcare facility. Also, those facilities are lacking resources. There is no medicine, not even the most basic painkillers.”

Ngöbe women, in particular, face many challenges. Carrera admits, “Ngöbe culture is machista. There are still people in the community who think that women should not have the same rights as men. But women have special points of view and know what is happening with the children and within the household. Even if there is discrimination, women should be strong and know that things will be better. There are also many who think women should not hold public office. But even men are supporting me. Before, when men won, they forgot about the local population and started running around in new cars and chasing women. Now with women as leaders, they can focus on the comarca.”

Carrera’s advice to young Indigenous women is at once a challenge to them, as well as a call to their better natures. “Many young women want to be out on the town and forget about the responsibilities and the community. I think that young Indigenous women should be responsible and honest.” Carrera has confidence that she will see these traits emerge as more women leaders step forward.

— Isidoro Hazbun was an intern at Cultural Survival.

To learn more about Cultural Survival’s efforts to support the Ngöbe people’s struggles against the Panamanian government visit: goo.gl/NHDg2 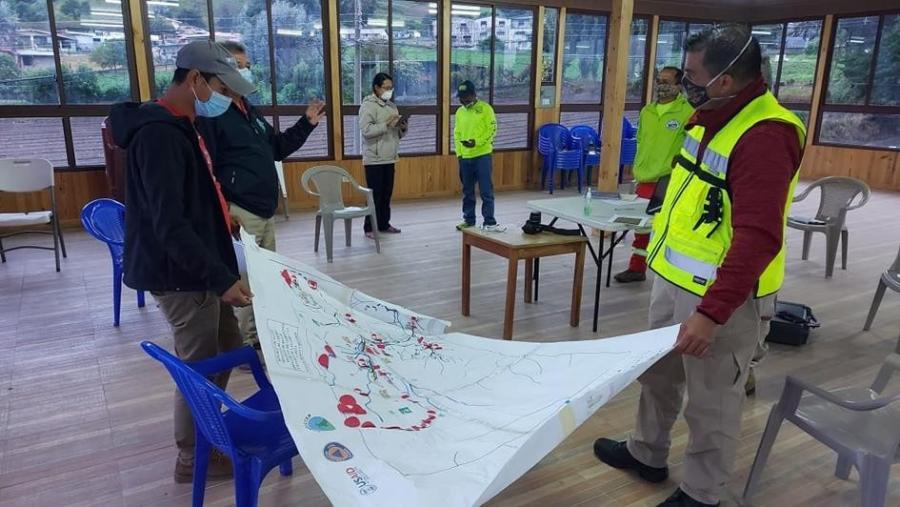 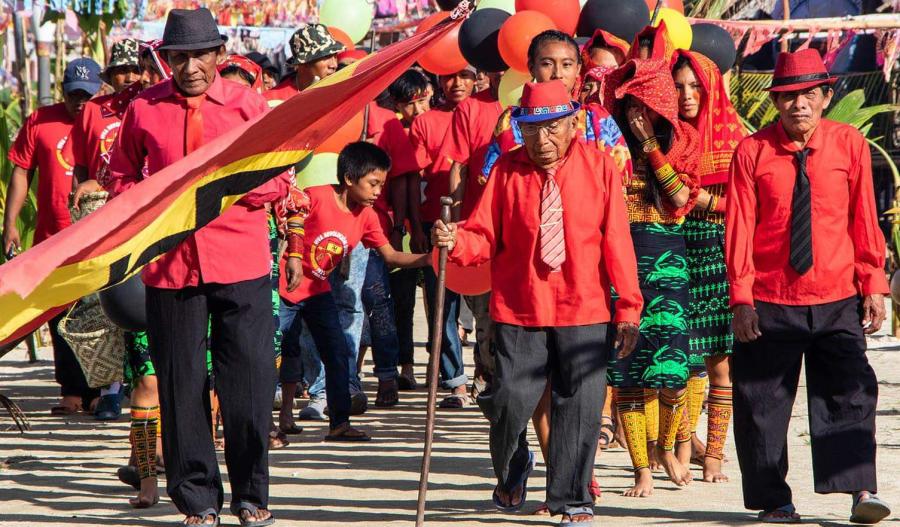 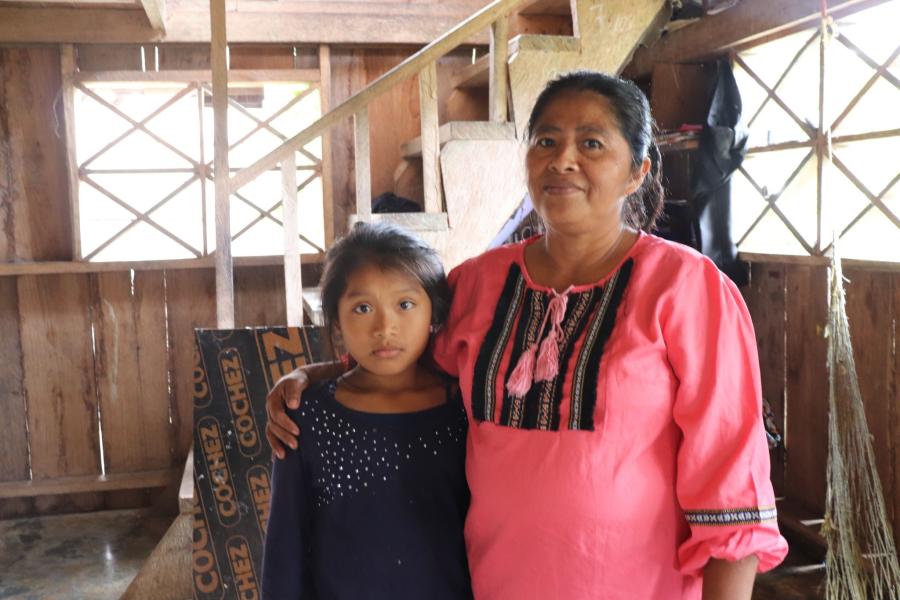