The Significance of 2012 for Cultural Survival 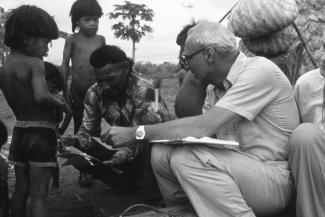 "On March 2, 1972, my husband David Maybury-Lewis [1929–2007], Evon Z. Vogt Jr., Orlando Patterson [all social scientists at Harvard], and I opened the first Cultural Survival office,” recalls Pia Maybury-Lewis. “My husband was president and I did most of the dirty work! We were located on the fifth floor of Harvard’s Peabody Museum, and we had no heat, two chairs, and a phone. ”

The impulse for the founding of Cultural Survival arose during the 1960s with the opening up of various remote regions in the world, including the Amazonian rainforests of South America. Governments all over the world sought to extract resources from areas that had never before been developed. The drastic impact this had on Indigenous Peoples underscored the urgent need to partner with Indigenous communities to defend their human rights, autonomy, resources, and cultural survival. Cultural Survival was founded to facilitate this process of partnership. “Raising funds to work with Indigenous Peoples in the 1950s was not easy, there was no money like there is today for such things,” Pia recollects. “David and I had to work for almost two years as English teachers in the city of São Paulo in order to earn enough to conduct our initial field work. We first lived among the Xerente of Goiás, in northern central Brazil, for about 18 months in the mid-1950s, where David began his anthropological studies. After the Xerente, we were the first outsiders to live with the Xavante in Mato Grosso, also in Central Brazil. David hunted with Xavante men while I gathered fruits and roots with the women, with my baby, Biorn, strapped to my hip. We lived with them, almost completely cut off from the rest of the world, for eight months.”

“[The idea of Cultural Survival] was to start an organization to give something back to Indigenous Peoples. We felt we should support them in the face of [unwanted] development. The most important thing for Indigenous people in general was to secure titles to their land,” continues Pia. In the 1970s, to call attention to the social costs of development and the price of progress on remote Indigenous communities, David wrote widely distributed articles in Harvard Magazine (HM), an op-ed piece in the New York Times, among other publications. In HM he wrote, “There is no natural or historical law [saying that Indigenous Peoples must inevitably be overrun], there are only political choices.” David argued for cultural pluralism and the rights of [Indigenous Peoples] to their own unique ways of living. He wrote: “I consider the effort to protect the cultural integrity of [Indigenous Peoples] an issue of [great] importance…. What we are really talking about is the ability of human beings to discover ways to live together in plural societies. It seems to me that this is the critical issue of our times.” This became the underlying cause of Cultural Survival.

Later, in 1995, David Maybury-Lewis wrote, “We founded Cultural Survival to bear witness to [a] genocidal threat, to make the world aware of this process of destruction, and to try to stop it. In order to do this we . . . were involved from the beginning in a process of argumentation. We had to counter the plausible falsehoods of the conventional wisdom, which are used in the modern world to rationalize the destruction of marginal societies. According to these stereotypes, it is perhaps regrettable, but ultimately inevitable that Indigenous Peoples should be wiped out. This . . . is the price of progress…. So Cultural Survival found itself, from the beginning, doing research on alternative development, on Indigenous rights and how to protect them, and on the prospects for multiethnic societies. We sought to demonstrate that Indigenous Peoples do not die off naturally in the course of modernization, but are killed off brutally by civilization. We set out to show that this was unnecessary as well as immoral and that there were viable alternative policies that would protect Indigenous rights…”

Pia describes Cultural Survival’s first project: “[We were] trying to get money and supplies to the Yanomami people of Venezuela who were encountering a devastating measles epidemic [in the 1970s]. . . . Our first interns were students. In the early days we had many interns—as many as 30, sometimes. They were full of energy and suggestions, and were eager to hear, see, and learn how we could help Indigenous people in South America and other places. To help with our advocacy campaigns, they would do research and write letters.”

Even in enlightened Cambridge, Massachusetts, finding adequate funding sources was never easy. Furthermore, attitudes toward Indigenous Peoples were appalling. Pia recalls trying to raise money at a dinner with wealthy friends and being asked questions that revealed stunning ignorance of Indigenous Peoples. One such question was, “Do they [Indigenous Peoples] have a language? Can they speak?” Pia laughs holding her forehead, “I don’t think she asked if they had tails, but I think she wanted to know!”

In the 1970s, there were no fundraising gurus or directors of development to give advice on how to raise funds. Pia recalls, “We hadn’t the foggiest idea how to raise money. We would have a big dinner with lots of wealthy people, and they would all be thinking, ‘When are they going to ask us for money?’ Funny thing was, we didn’t know we had to ask! We thought they would just give it to us [through their own inspiration].”

Ted MacDonald, Cultural Survival’s first project director, remembers the early work of the institution. “There were a whole series of changes in the human rights arena [from the 1970s to the 1980s]. [In the beginning] Cultural Survival had money for publications, research, exposure, and assistance, but everything was done unsystematically. We were trying to figure out what to do. The only thing we could do was give random assistance to communities. We relied on contacts in [specific] regions and would ask them to identify something that really needed support. In the 1980s, Indigenous groups organized much more effectively. So, Cultural Survival shifted its focus, around 1981 or 1982, away from supporting tiny activities toward programmatic support, to strengthen emerging Indigenous organizations [mainly in Central and South America]. Up to about 1985 or so, that was the work.”

After 40 years of advocacy and work with Indigenous communities, Pia still feels that one of the most important goals of Cultural Survival’s partnerships with Indigenous Peoples is the securing of their land. “If you have land, you [have] everything,” she stresses. As an advocate for all Indigenous Peoples, Cultural Survival’s focus is unerringly sharp on perceiving land as an indispensable assurance of autonomy, empowerment, and ultimately, identity. “And given the importance of identity,” Pia adds, “the other critical issue is keeping Indigenous languages alive. Language survival
is cultural survival.”