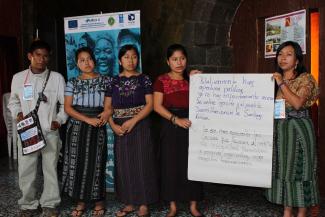 It was the morning of 7 Ajpu according to the Maya calendar, a date that represents strength, confidence, and bravery. Fifty-three Indigenous youth representing three countries and at least seven distinct Indigenous communities gathered in the shadow of volcanoes on a secluded patio overlooking Guatemala’s Lake Atitlan to participate in a traditional Maya ceremony. The ceremony would usher in the First International Radio Conference for Indigenous Youth, to take place from November 26–28, 2013. The event’s goal was to build networks and foster collaboration among Indigenous youth from Guatemala, Belize, and El Salvador, using community radio and shared Maya culture as the foundation and medium for their work.

On the first day of the exchange, the youth heard panels led by community elders and experts. Felipe Gomez, an Ajq’ij Maya K’iche leader who led the opening ceremony, spoke about the perception of justice and environmental stewardship in Maya Cosmovision and how knowledge of traditional Maya beliefs can fortify the youths’ work. Nana Maria, a Kaqchikel elder, described Maya traditional justice systems in which the concept of prisons does not exist. She talked about the necessity of finding ways for the official justice system to respect and make space for Maya justice, which is restorative, not retributive. Other panelists discussed young women’s empowerment, human rights, and community radio. Youth responded  respectfully and critically to the panelists’ presentations, asking tough questions about how to put their ideas into practice. One youth asked, “How can Indigenous youth gain access to high level planning when we are always told that we don’t have the capacity or experience?” The event aimed to answer this question by openly acknowledging the discrimination youth face and by empowering them with tools and language to address injustice.

Later in the day, a visit to Radio La Voz de Atitlan, the local community radio station, gave non-local youth a chance to wander Santiago’s narrow, cobbled streets with their enticing scents of traditional street food. Once at the radio station, the youth toured the recording booths and conference spaces. For some, it was their first experience visiting a community radio station. Later, the entire group squeezed into the small home of the local traditional authority, who described the important role of the ancestral authorities in the community.
He spoke in Tz’utujil, which was then translated into Spanish for the Guatemalan and Salvadorian youth. From Spanish, his words were translated into English for the Belizean youth.

These chains of translation highlighted the richness of the cultures that make up today’s Maya peoples. On the second day, Francisco Coché Pablo of Community Development  ssociation of Panabaj (ADECCAP), Jose Roberto Benitez Velasco of El Salvador, and Alberto “Tino” Recinos, Cultural Survival director of citizen participation and president of Mujb’ab’l yol Radio  Association, shared their experiences as guerrilla fighters and community members during the devastating armed conflicts in Guatemala and El Salvador that threatened to extinguish the very Mayan cultures that this conference was working to strengthen. Their emotional accounts reminded the youth from all three countries of their shared history both for the sake of remembering and, as the presenters reiterated, so that the next generation could work against history repeating itself Later, the youth broke into groups to discuss broad social and cultural questions to develop content that will be used for a regional radio series being produced by Tumul K’in Centre of Learning and Ak’Kutan Radio in Belize. Spanning language,
age, and cultural differences, Maya youth delved into such topics as freedom of expression, teen pregnancy, and drug addiction. Later that day, groups participated in investigative journalism workshops. Youth with more radio experience led the workshops; other youth with little or no radio experience had a chance to practice interview techniques, first within
their groups, and later via an investigative journalism practicum where they conducted interviews with other conference participants and facilitators, and then reformatted them into group presentations. During the community radio press conference on the final morning, the youth recorded these presentations for broadcast on their local community radio stations.

On the last day, after presenting the findings of their investigative journalism interviews, the youth signed a declaration of the challenges they face and the responsibilities they would commit to fulfilling, emphasizing the development of relationships based on respect and dialogue among Central American Indigenous youth. Event participants demarcated language and communication as key to building Indigenous and youth self-determination and promoting social change. Earlier Recinos had commented that during the armed conflict, “we fought with weapons. The last thing I want is for youth to experience what I experienced. I can’t say that I liked the war, but I love my ideas.” Those ideas he fought for laid the foundation for today’s Indigenous youth working for social change. As one youth explained, within social movements “we’ve left behind our weapons; now we use international conventions and declarations. These are the machetes that we use now to defend our rights as Indigenous Peoples.”

The youth in attendance were deeply aware of the importance of community radio. One participant from a Salvadorian community radio station commented, “As Indigenous youth, we suffer from many problems caused by the system that oppresses us. Being able to participate in community radio fills us with joy. Taking part in a form of media that is normally not open to youth in order to express our ideas and needs has been one of the most enriching experiences I’ve had.” Community radio takes on issues such as health, education, disabilities, and human rights. Eduardo Laroj, a Kaqchikel youth from Sumpango, Guatemala, said, “For me, community radio is a school where I have learned many things about children’s rights, women’s rights, and social struggles taking place in this country.”

In addition to the conference’s planned activities, youth took advantage of other opportunities to relate to each other. English-speaking Belizean girls passed notes with Spanish-speaking Guatemalan girls, using their limited knowledge of each other’s language and endless laughter to communicate. Boys from Guatemala, Belize, and El Salvador played an impromptu game of soccer. As Brenda Garcia, a Tz’utujil youth from Radio Sembrador in San Pedro Atitlan, put it, “It was an excellent exchange. As we shared the situations occurring in each of our communities, we realized that we have a lot in common.” Among other things, the youth discovered a collective legacy of armed conflict and oppression of Indigenous peoples, languages, a unifying Cosmovision, and a shared love of soccer, too. Both within and outside of scheduled activities, youth from different geographic locations, different levels of experience with community radio and Maya practices, and perhaps most powerfully, different languages, came together with the goal of reclaiming their rights and connecting with other youth. A frequent refrain reminded the young people of how much work is yet to be done as the conference, the second in a series of three, provided a space for the network  building necessary to that work. The words of one Guatemalan youth summed up a sentiment that was palpable over the three days: “I am grateful to community radio, which has offered me this opportunity to share with our Salvadorian and Belizean brothers and sisters.”