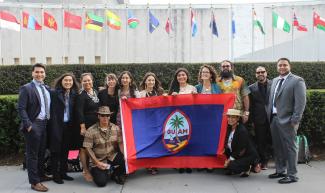 Fifty-seven years after the Declaration on the Granting of Independence to Colonial Countries and Peoples was adopted by United Nations member states, seventeen Non-Self-Governing Territories still remain—a not insignificant number of which are islands separated by oceans from their respective colonial rulers. Included among these is Guam (a mispronunciation of its original name, Guåhan) in the Western Pacific region of Micronesia, whose Indigenous Chamorro people have endured not just one, but three waves of foreign invasion and occupation: Spain, Japan, and now the United States. It remains in a kind of interstitial limbo, despite the UN mandate that its people be given the right to choose, as a nation, among the options of free association, integration (with the colonizing entity), or independence.

In October, a delegation of 16 Chamorros (elected officials, activists, and academics) engaged in the decolonization process came to New York to address the Fourth Committee of the UN General Assembly to assert their sovereignty and demand that their voices be heard and that the will of the people be given full sway over their island’s future. “The entire Bill of Rights doesn’t apply to us,” said Guam Senator, Fernando Barcinos Esteves, referring to the limits a territory faces that states do not. “We’re fighting with a rifle but no ammo in the U.S. court system because we can’t fight on all the merits of the Constitution.”

For Guam, the rifle/ammo scenario is not just a metaphor. “Since the U.S. military took control of our island, they’ve treated the Chamorros like children, tried to prevent us from speaking our own language, and have stolen the lands of thousands of our people to build their military bases,” said delegation member Michael Lujan-Bevacqua, assistant professor of Chamorro Studies at the University of Guam. Most recently, as Pim Litiaco of the organization Famoksaiyan noted, “Chamorro access to one of our most sacred sites, Litekyan (a.k.a. Ritidian Point), has been restricted” in anticipation of its forthcoming conversion by the military into a live-fire training complex.

Rallying against this level of militarization is no easy task when military activity provides a major portion of local employment opportunities. North Korea, meanwhile, knows well Guam’s strategic significance in the middle of the Pacific; just last summer, Kim Jong-Un threatened to launch a missile attack on the island to avenge perceived aggression toward him by President Trump and the United States. The threats have sparked more Chamorros than ever before to learn more and become more engaged in the decolonization process. “[Our] people, used to thinking in a primarily liberalconservative American ideological context, have started to dip their toes into decolonial waters,” Lujan-Bevacqua says, reflecting on the increased turnout for public teach-ins that Independent Guåhan, the organization he co-chairs, organizes.

While the UN mandate is to decolonize Guam by 2020, Lisa Natividad of the Guam Commission on Decolonization warned in her petition to the UN that “the unilateral misapplication of U.S. law to the territory” stands in the way. Indeed, the courts have ruled in favor of a suit brought by a nonIndigenous American military retiree residing on the island, insisting that the plebiscite to decide the fate of the Chamorro homeland include all—not just the Indigenous— Guam residents. “The decolonization process is not a matter of civil rights,” asserted Natividad, “but an exercise of the inalienable right to self-determination for those who have collectively experienced colonization.”

Julia Faye Muñoz, a student member of the delegation and representative for the Pacific Women’s Indigenous Network who was raised in a family long active in this process, vowed, “We will continue our fight to insure that Guam is recognized by the global community as a self-governing nation to be respected.” The UN Fourth Committee, having heard their petitions, is in alignment with those wishes, affirmed, “There is no alternative to the principle of self-determination; a fundamental human right.”

— Cristina Verán is an international Indigenous Peoples’ issues specialist, research consultant, strategist, and multimedia  producer. She is a longtime United Nations correspondent and was a founding member of the UN Indigenous Media Network.