Saving our Identity: An Uphill Battle for the Tuva of China 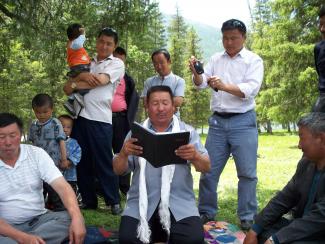 The Tuva are ancient hunters and nomadic peoples whose lineage can be traced back more than a thousand years to the Tang dynasty. Described in the Tang dynasty-era book Tongdian as “skiing hunters” and during the Yuan dynasty as “forest people,” they lived a free, mobile life around the Yenisei River and the Altai and Sayan Mountains. According to Chinese historical records, the Tuva were hunters and nomads until the Qing dynasty, which lasted from the mid-1600s to the early twentieth century. They declared independence from China in 1912, directly following the Chinese revolution of the year before, and in 1944 were incorporated into the USSR as an autonomous oblast (administrative region). Today, the Tuva are scattered across Xinjiang (China), outer Mongolia, and Russia. Chinese Tuva mainly live in the three villages of Kanas, Hemu, and Baihaba, with a total population of around 2,500.

As the Chinese government endeavors to push economic development and continues to establish itself as a major world power, groups like the Chinese Tuva are especially vulnerable to mental, physical, social, and cultural suffering. Tuva elder Mengboer has witnessed the great cultural shifts of the last half century. In his words, “Before the Cultural Revolution, we could freely conduct hunting and nomadic life in the forest and grasslands; shamanism, natural worship, and hunting taboos had endowed us with ecological wisdom. However, with the rapid development of national assimilation, forced settlement, tourism, and the implementation of hunting prohibition, we were drawn into a strange and crazy world that is full of utilitarianism, demoralization, anthropocentrism, and economic centrism.”

This rapid transformation has hugely impacted the Chinese Tuvas’ traditional culture, livelihood, survival concepts, natural environment, and naturalistic values. Since the Cultural Revolution they have also endured the loss of their own pluralistic medicine traditions and now face the dilemma of a modern medical system. The small, simple clinics in Chinese Tuva villages are short on both medicine and doctors, so ailments like the common cold or fevers sometimes prove fatal due to expired medicine or misdiagnosis. As a result, increasing numbers of Tuva refuse to see a doctor.
However, they can no longer seek out traditional folk healers, such as shamans or the family sage—they have all but vanished.

Crises of Culture, Identity, and Language
The Tuva are defined as a cross-national ethnic group separated by national borders (China, Mongolia, Russia), though for the purposes of national identification the Chinese government classifies them as Mongolian. Wuyun, an elder Tuva who runs several small businesses in the community, explains the difficulty of being classified this way: “We should be identified as a separate Tuva ethnic minority instead of belonging to Mongolia due to our unique language and the historical relation with the Tuva people of China. Most Tuva live outside of China, so we were afraid that once we were classified as Mongolian people, gradually we would be assimilated into Mongolia and lose our own language and culture,” she says.

Chinese Tuva were identified as Mongolian as a result of state power and the consideration of border security and stability, but the ensuing identity crisis has challenged their collective psychological and cultural identity. In daily life, Chinese Tuva used the Tuva language as their family language
and the Kazak language as an inter-ethnic language. The Mongolian language was rarely used, and most Chinese Tuva cannot speak it fluently. However, many can speak fluent Mandarin due to the influence of institutionalized education and practical consideration. The Tuva language has been called “the live fossil of old Turkish language” without the written system. As Tuva elder Aeruna, a retired primary school teacher, explains, “In the beginning of the establishment of People’s Republic of China, we endeavored to establish the Tuva language school. But, we could never fulfill it. It became impossible after we were identified as a Mongolian ethnic group.” With the rapid development of modern education and urbanization, increasing numbers of young Tuva are denied the chance to use the Tuva language. As a result, Tuva has become an endangered language. Suder, a herdsman in the community, offers another perspective; he has two children who are currently being educated in a Han Chinese school. “Although I know our language is at risk, we still hope our children will have a good grasp of Mandarin, which could bring them more opportunities and better future,” he says.

Population On the Brink
Following the Cultural Revolution, most Chinese Tuva who lived through it later suffered from mental illness. Depression and mental illness also afflicts young Chinese Tuva within national assimilation projects, most likely due to forced settlement and hunting prohibition. These blows to their traditional ways of life, along with the government’s social neglect, have led to feelings of resentment and desperation that are frequently accompanied by alcohol abuse, crime, and even suicide. Melingsha is a Tuva housewife who lost her husband to complications from alcohol abuse. “During the long winter,” she said, “we could not continue our own traditional life of hunting and gradually fell into alcoholism. Alcoholics included youngsters, old people, pregnant women, and even minors. The alcoholism also created a series of social problems such as divorce, violence, crime, and suicide,” which have all contributed to population decline.

The number of pregnant women who are alcoholics, in concert with poor delivery conditions, has worsened the population decline. According to Mengkerqia, a knowledgeable local elite, “From 2007–2008, the death number and birth number of Chinese Tuva were 42 and 12, respectively. In 2009–2010, the numbers were 38 and 9. Additionally, Chinese Tuva women have been increasingly intermarrying with Han (Chinese), Kazak, and Hui Peoples. They have had to make such decisions as a result of the large number of male alcoholics in our native population.” The official point of view
is that the main factor of population decline to inbreeding. Tala, an elder Tuva housewife, refutes this: “Historically, consanguineous marriage never happened in our society. Because we belonged to different tribes, we strictly followed the marriage taboo of no marriage within seven generations,”
she says.

In actual fact, the Tuvas’ population declined as a dual result of forced settlement during the Cultural Revolution and modern day tourism; in a vicious cycle, the difficulties faced by Tuva men in particular exacerbated the rate of alcoholism, and alcoholism has worsened the marriage problem. In addition to the overt causes of national assimilation projects, forced settlements, and hunting prohibitions, there are more problems lurking behind the scenes: sedentary centrism, economic centrism, and anthropocentrism have pushed the current Chinese nomadic people and other small ethnic groups to the brink. But, the future is not written yet. If given a chance, it is possible that the ecologism, environmentalism, and naturalism practiced by these once nomadic people could bring much enlightenment to modern civilization.