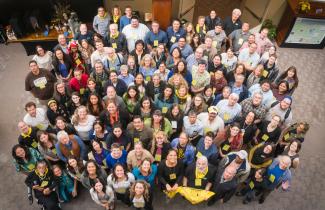 Indigenous Peoples contribute least to climate change, yet are at the frontlines of its impacts, constantly needing to adjust and adapt to their changing environments. They have always read the weather, understanding its impacts and shifting their practices to accommodate the changes they encounter. It is this place-based knowledge, handed down through generations yet continually updated by present-day observations, that has much to contribute to Western science—especially in relation to predicting and coping with accelerated climate change and the correlating extreme rising voices brought together over 130 indigenous people and climate scientists in addressing climate change adaptation and mitigation.

Through collaborative research, presentations, and group discussions, participants worked on developing specific pathways to move from science to action for climate adaptation at local, national, and international levels. Rising Voices seeks to diversify scientific research by including Indigenous knowledge and science in solutions to weather and climate extremes. This was the first time international Indigenous participants were invited, expanding the event into an opportunity to address climate change issues impacting Indigenous communities around the globe. It also brought in the richness of their diverse experiences, both from their local perspectives and in regards to the international climate change work many of these participants are actively engaged in.

Cultural Survival Executive Director, Suzanne Benally (Navajo/Santa Clara Tewa) explained Cultural Survival’s motivation for co-convening the workshop: “Indigenous people have drawn on Indigenous knowledge and science for millennia to understand and respond to climate and environmental changes they faced. This knowledge is deeply embedded in our worldviews and relationship with the natural world, as well in our cultural practices. What is different and challenging today is the rate of manmade climate change and our ability to respond to it. We must correct the path we are walking on and return to the special relationships, the teachings, the knowledge and practice that maintains respect, honor, and relationship with the natural world.”

Heather Lazarus of the National Center for Atmospheric Research highlighted why Rising Voices is so important. The challenges from global climate change “necessitate many different ways of thinking, and those include knowledge systems that come from community, come from tradition, come from diverse cultures, as well as from technical Western science,” she said. “I think that diverse knowledge systems can come together and work together, almost like different pieces of a puzzle, so that you get a picture of the whole, of all the challenges that we’re facing, including the societal, cultural, and spiritual dimensions; the local, community-based, and traditional scientific knowledges can help us alongside technical science to think of more questions to ask, solutions, and deeper understanding. Facing the challenges of climate change, we can’t afford not to have as many perspectives and as many different solutions proposed as absolutely possible.” Rising Voices included presentations and discussions covering such topics as collaborative research; linking local initiatives to international mobilization; the tensions and discrimination Indigenous science faces within the Western science community; building collaborative knowledge about extreme weather, climate change, and disasters; and strategies for implementing knowledge into action and policy making. A highlight was the plenary panel on Building Collaborative Knowledge about Extreme Weather, Climate Change and Disasters, where Indigenous leaders discussed the ways that Indigenous science and Western science contribute to understanding and responding to the impacts of climate change.

Jannie Staffansson (Saami) represents the Saami Council, an NGO that works for her peoples living in the territories of Norway, Sweden, Finland, and Russia. In her presentation, she highlighted the very personal reason she decided to become educated in Western science, emphasizing that her knowledge “does not come from science, or from the Western systems. It comes from my communities.” She gave the example of how the Saami are using GPS collars on their reindeer to track their migration so that they can prove to the government how they actively use their land. is is to validate what the Saami already know: where the reindeer go and how the Saami migrate with them.

Hindou Oumarou Ibrahim (Mbororo) is a leader of a pastoralist community in Chad. She is also one of the co-chairs of the International Indigenous Peoples Forum on Climate Change (IIPFCC), the main international Indigenous body working on climate change issues at the international policy level. In her presentation, she highlighted the importance of the traditional knowledge of her communities’ weather forecasting—gained by observing the amount of water in certain fruits, levels of water in the lake, the number of lizard babies born in a given year, and the direction of the winds to predict the next year’s rainy season. “Through our way of life we develop a lot of traditional knowledge. When the ecosystem is changing, our knowledge is growing. We create our own Indigenous knowledge in order to adapt to our changing climate,” she said, before speaking about the difficulties in transmitting that local knowledge to the international level. As one of the key Indigenous actors in the UNFCCC negotiations, she described the hard work they put into the Paris Agreement. Their great collective achievement is in Article 7.5 recognizing that the knowledge of Indigenous Peoples should be considered in environmental policies and actions in regards to climate change adaptation.

Berenice Sanchez (Nahuatl/Otomi) is an Indigenous leader from Mexico who proudly described her people’s autonomy since the Spanish Crown. She explained that they do not ask the local, state, or national government for anything; if some- thing is to happen on their lands, the government must ask their permission. In regards to their territories, the communities know their boundaries without markers. They share the forest where they collect food, traditional medicines, and work on the irrigation systems needed for their agricultural practices. Her presentation highlighted the impact of a carbon offset program that deeply divided their communities as some chose to sell the forest, while others, like her community, wanted to conserve it. “They cut down the forest, 500 years old or more, and planted some eucalyptus trees or some other kind of tree, saying to the community that this is the payment for environmental services, that there will be carbon benefits and that the community is going to be very happy—without realizing that in a few years they aren’t going to have the permit to go in and pick anything; that in that moment they’re giving away their lands into private hands, which is another form of colonialism. And that on top of all that, it’s affecting my land, my future, my people. And it’s affecting the future of the entire planet.”

This panel stood out as one of the highlights of the workshop, best captured by an audience member: “You’ve shown . . . the beauty and the complexity of Indigenous ways of thinking, from poetic, from analytical, from very locally community-based, to possibly being able to generalize on a much larger scale. At least for my coming here to Rising Voices, and this is the third year I’ve been coming, you’ve really made an incredible impression on me. Hearing you gives me hope that there’s potential for social network and social movement that really combines all of the Indigenous Peoples and allies as well.”

At the end of many fruitful discussions and debates, some themes emerged from the Indigenous participants emphasizing key principles; first among them was the importance of honoring Mother Earth. Using the United Nations Declaration on the Rights of Indigenous Peoples as the guideline for any engagement with Indigenous Peoples is crucial, as is ensuring the application of the principle of Free, Prior and Informed Consent. e emphasis was on establishing protocols and guidelines that would create an environment of mutually beneficially information sharing, particularly in the context of preparation for extreme events. Most important was the need to honor the holistic worldviews and knowledge of Indigenous Peoples, including following appropriate protocols and respectfully recognizing their contributions to science. It was also key for Indigenous Peoples to have any data derived from their collaborations communicated back in a way that can be understood by their communities, the promise to ensure that presentations are held in a culturally appropriate manner.

Underlying it all was the need to understand that the long-term science of Indigenous Peoples can both complement and inform Western science. For many of the Indigenous Peoples in attendance, this was one of the first times they had a chance to directly engage with the scientific community. Cristina Coc (Maya), an Indigenous leader from Belize, had this to say about her first time at Rising Voices: “I’m starting to really embrace and understand that there are opportunities for collaboration between the scientific world and the Indigenous world—where Indigenous traditional knowledge can be valued as equal, if not more important, to inform the scientific world, particularly because these global challenges of climate change are not for any one person or any one community.”

—Miriam Anne Frank is an independent consultant to IPOs, NGOs, international organizations, and foundations. As an applied anthropologist, she lectures on Indigenous Peoples’ issues at the University of Vienna, Austria.

The following are excerpts from presentations and interviews conducted at the conference.

• On the Forefront of the Struggle— Andrea Carmen
• The Connection Between Climate Change, the Environment, and Language—Kaimana Barcarse
• Protecting Knowledge—Tui Shortland
• We Communicate Earth—Jannie Staffansson
• We Create Our Indigenous Knowledge to Adapt—Hindou Oumarou Ibrahim
• Collaboration Is Key— Mathew Stiller-Reeve
• Impacts of Climate Change on Our Communities—Edgardo Benítez Maclin